Latest
You are at:Home»Forex News»3 reasons to go short on EUR/USD

Here are three reasons for a potential downfall:

1) May may be gone already in May

The euro was swept higher on Tuesday, following in the footsteps of the pound. UK PM Theresa May opened the door to holding a second EU referendum and perhaps reversing Brexit. However, her “new deal” failed to convince anyone. GBP/USD dropped sharply and has now reached the lowest in four months while EUR/USD has returned to the range.

What’s next? According to reports, more and more members of May’s Conservative Party are calling her to abandon her new approach and to quit altogether. The leading candidate to replace her is former Foreign Secretary Boris Johnson, who is tougher than May on Brexit.

If the pound extends its losses, EUR/USD may suffer as well.

2) Trade wars: Not only Huawei

While the Chinese ambassador to Washington has called for new trade negotiations, the US has aggravated the situation by considering a ban on Chinese surveillance firms. The new move worsens the mood in markets and the safe-haven US dollar benefits.

The news joins America’s blacklisting of Huawei, a Chinese telecommunications giant, and tariffs that the world’s largest economies had announced.

Voting for the European Parliament begins tomorrow in the UK and the Netherlands and will conclude on Sunday. Euro-skeptic parties are set for significant gains, especially in Italy and also in France. There is also a risk that German Chancellor Angela Merkel, seen as a beacon of mainstream politics, may step down.

Worrying opinion polls and tensions weigh on the common currency and not everything may be priced in.

Apart from these three factors, EUR/USD ignored a speech by European Central Bank President Mario Draghi, that did not provide any news. The central bank on the other side of the pond will likely be more interesting. The Federal Reserve releases its Meeting Minutes from the latest rate decision in which the Fed reiterated its patient stance. 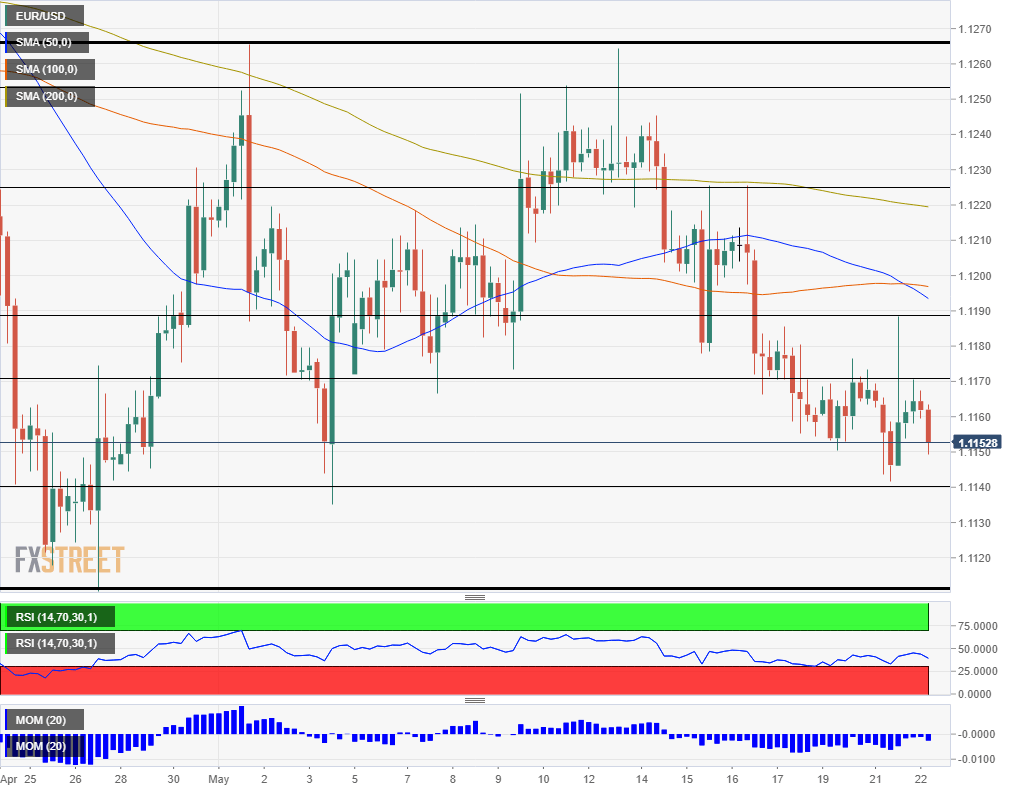 The 50 Simple Moving Average on the four-hour chart crossed below the 200 SMA, the “death cross” pattern. Momentum remains to the downside and the Relative Strength Index maintains a safe distance from oversold conditions.

All in all, bears have the upper hand.

Get the 5 most predictable currency pairs
Previous ArticleUK CPI at 2.1% y/y in April versus 2.2% estimated
Next Article Cryptocurrency market: Bitcoin’s recovery stalls short of $8,000, Ethereum and Ripple in the green