As we begin July with sweltering temperatures across the world, there are plenty of the best cryptocurrency around which are making noises. May and in particular June have been a torrid few weeks with several coins losing more than 50% of their value and some crashing even further. Let’s take a look at the 5 best cryptocurrency which we believe will make some good buys this week.

5 best cryptocurrency to buy this week: 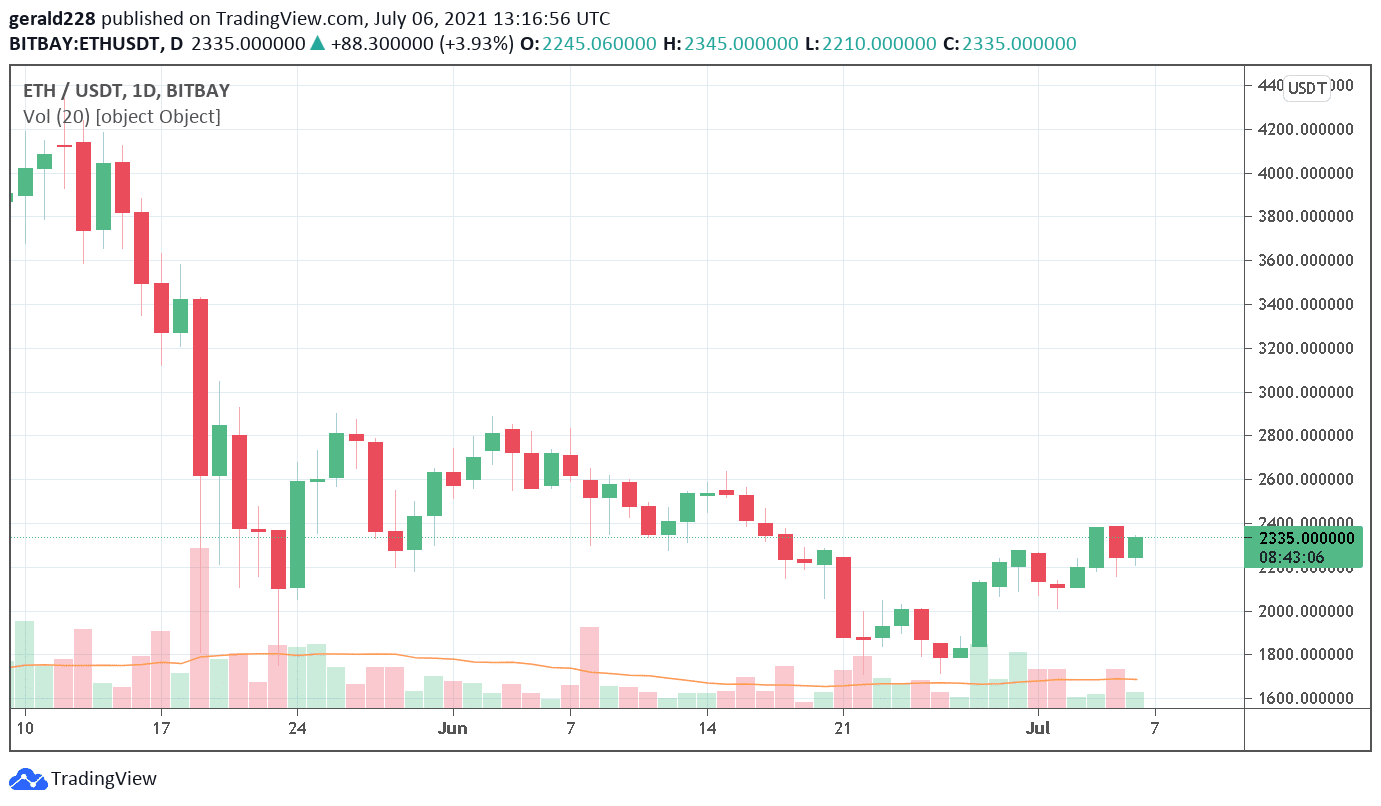 Ethereum remains one of the best cryptocurrencies with a use case that is always valid. With the DeFi market exploding and several decentralised exchanges built on the ERC20 token, the potential is certainly there. After reaching a peak of $4400 in early May, Ethereum took a tumble to the $1700 mark on June 21. It has since rebounded considerably and is trading at around 20% up off that low at the $2300 level.

After a period of retracement, it seems that Ethereum is on the way up and is looking to retest the $2600 level before taking the next leg up to the $3000 level. That would represent a 35% gain from the low of $1700 registered on June 21 although ETH is not expected to begin testing that mark until late July. However, it would be good to start accumulating now if the price is still relatively low a short term gains can easily be made. 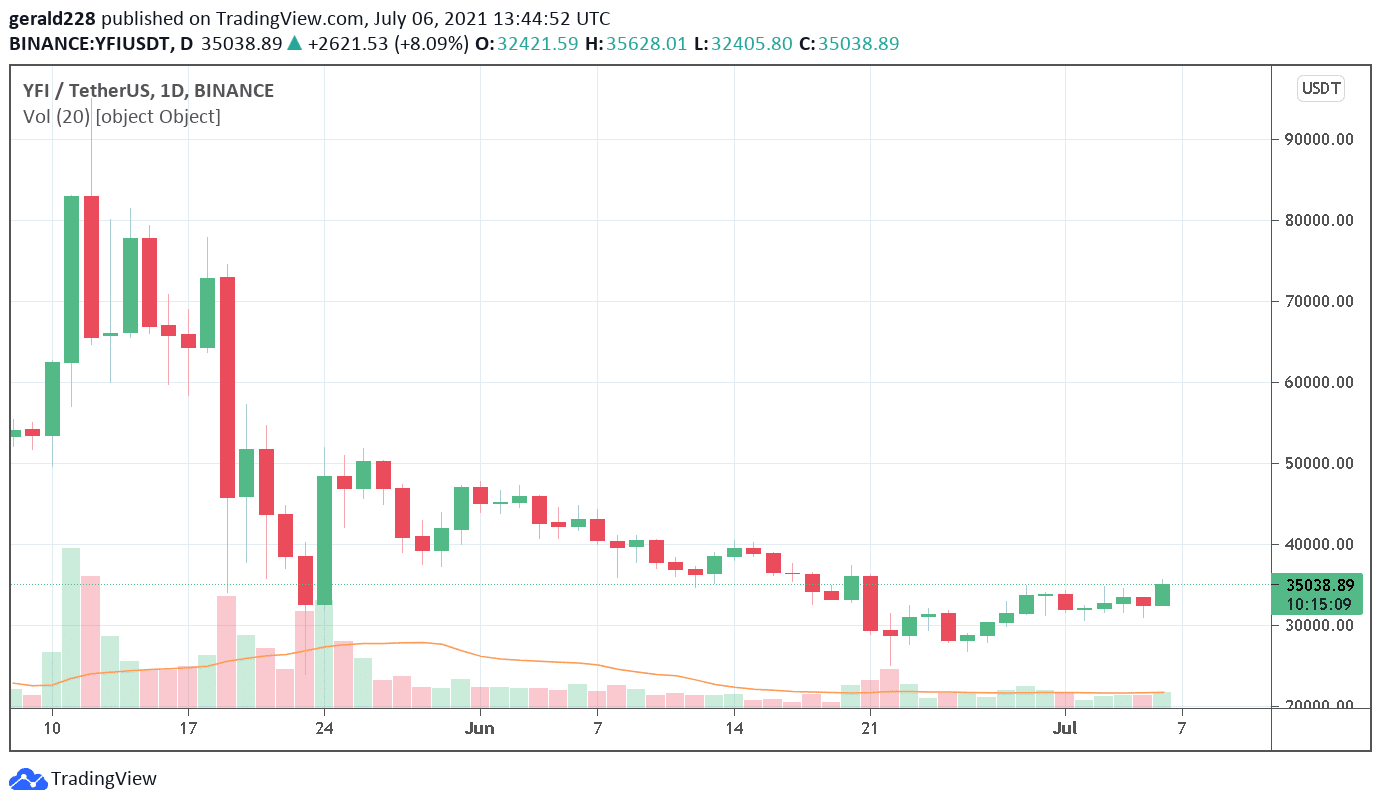 Yearn Finance was another cryptocurrency that suffered a considerable fall from its previously established highs in early May. After establishing a mind-boggling high of around $83K on May 11, the cryptocurrency entered freefall and descended by almost 50% to the $46K mark on 19 May. It continued falling where it reached the 28K mark on 25 June which represented a 65% decrease from its previous high.

YFI is currently looking at a recovery and is up by around 15% from these lows to the $35k level over the past 24 hours. Bullish indicators show that Yearn Finance should be retesting the $40K level soon after which it should continue rising exponentially. Although there could be some retracement along the way, the short-term indicators look positive. A buy for YFI would be a good recommendation for July. 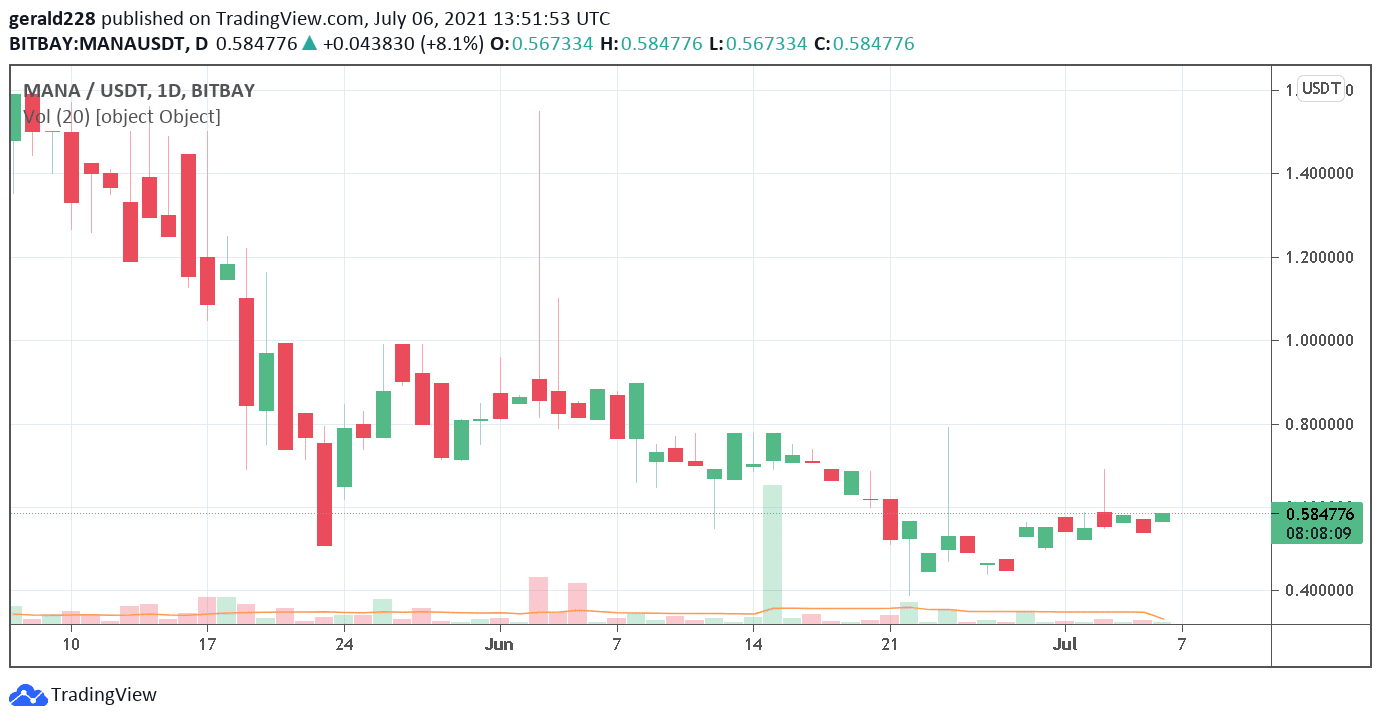 MANA is another cryptocurrency that seems strongly on the road to recovery. After having fallen from a high of $1.59 on 10 May to the level of $0.45 on 25 June, it has appreciated considerably since then. In fact, MANA’s price is currently in the region of the $0.58 to the $0.59 level and its is expected to breach the $0.60 barrier of resistance any time.

MANA’s strong use case in DeFi has continued to add to its allure with institutional investors wanting to get in on the act. It would definitely be a good idea to accumulate MANA at the current price before the next leg up begins. 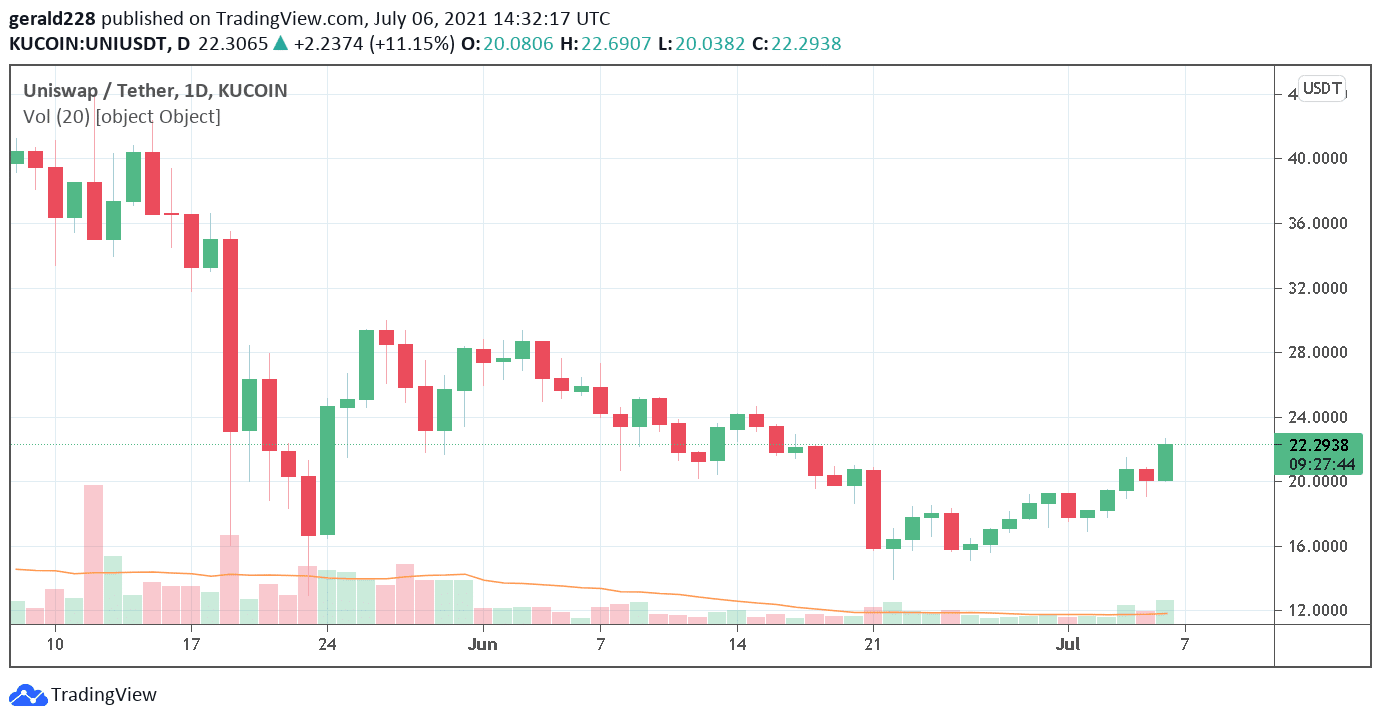 Uniswap is another cryptocurrency that looks like it is getting its legs together for a bullish run up. The innovative DeFi exchange went from strength to strength in the beginning of the year and reached a high of $45 in late April/early May. Uniswap then crashed to the $15.50 level on 21 June but has since recovered considerably. It is currently trading at the $22.50 level having easily broken the important $20 level over the past 24 hours. This represents a 30% gain from its June 21 low.

The short-term indicators for Uniswap appear to be extremely bullish with the next resistance level of $25 easily within its sights. It would definitely be a good idea to begin accumulating Uniswap at this price since further short-term gains are expected quite fast. Positive news with various announcements of partnerships have also increased the allure of Uniswap. 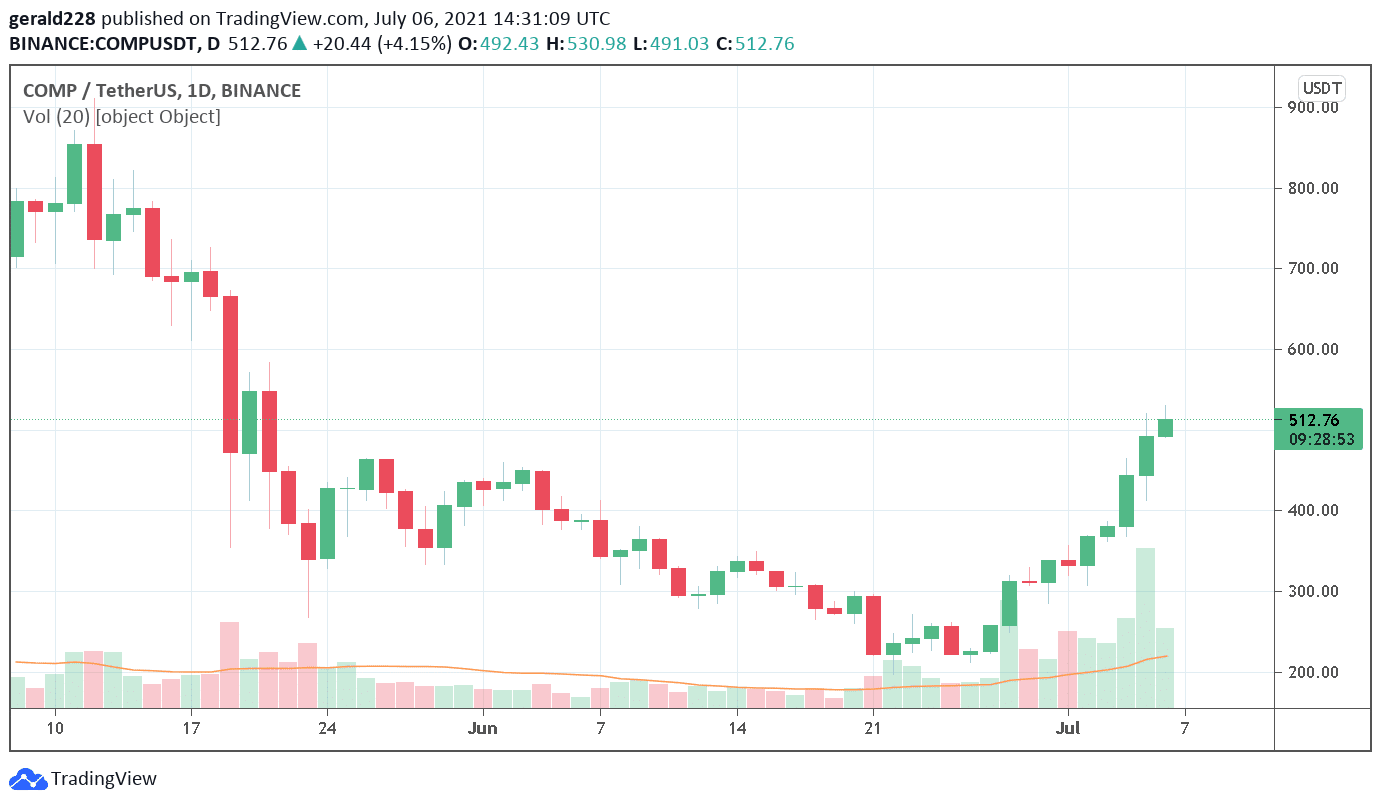 The last of our 5 best cryptocurrency to buy this week is Compound (COMP). The DeFi coin is definitely one of the top cryptocurrencies where rebounds are concerned, and has made huge strides since it reached its low on June 21. Compound had tested the $1000 level on May 10th only to come crashing down with a 75% decline which culminated at the $225 level on June 25.

However, Compound (COMP) has been on a consistent upward trajectory since that low and has appreciated by more than 100% since then. It is currently trading at the $511 mark and further bullish sentiment appears to be the case over the past 24 hours. Although most of the gains have now been made, it would not be untoward for COMP to continue charging forward and reach fresh highs over the long term. In fact, the long-term prediction for the end of the year is that COMP will once again test the $1000 value.