Earlier in the month, AMC reported a quarterly loss of $5.38 per share. However, the company announced that it’s preparing for reopening of movie theatres by establishing a protocol partnership with Clorox and adopting strategies such as limited capacity and blocked seating. Meanwhile, AMC further added that it’s expecting to receive relief from the Coronavirus Aid, Relief and Economic Security (cares) act.

These developments provided the initial boost to AMC and the rally gathered momentum after the world’s largest movie theatre chain said it will kick off the first phase of reopening theatres in the United States from August 20th.

In last week’s announcement, AMC further noted that it plans to open about two-thirds of its more than 600 theatres in the US in time for Christopher Nolan film “Tenet”, which is scheduled to be released on September 3rd.

Despite the impressive upsurge witnessed since the beginning of the month, AMC still has a long way to go to reach the June high it set at $7.35. The entertainment sector remains vulnerable with fears over the resurgence of coronavirus infections. Although the company seems to be taking decisive steps to make sure people will be safe in its theatres, a permanent change in consumer behaviour could have a long-lasting negative impact. On the other hand, an effective treatment against coronavirus is likely to provide a boost to AMC. In the near-term, $6.25 (June 19 high) could be seen as the next target. On the downside, the 100-day moving average is acting as a dynamic support at $4.30. 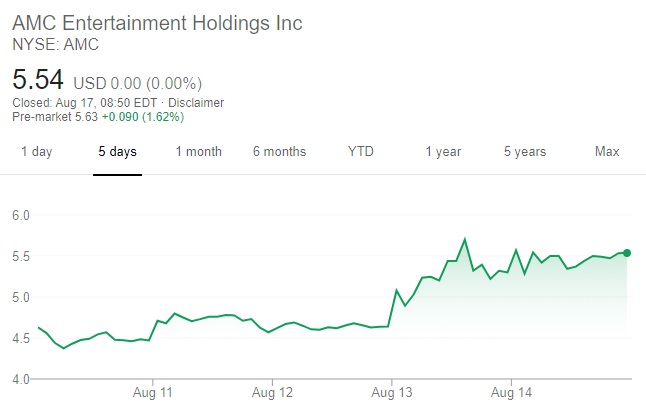 EUR/USD to show bullish potential on a break above 1.1870

NYSE:AMC gained more than 16% last week and closed above $5.50. AMC Entertainment Holdings Inc announced first phase of reopening US theatres. Company looks to receive relief from Coronavirus Aid, Relief and Economic Security (cares) act. AMC Entertainment Holdings Inc (AMC) extended its rally last week and gained 16.6% to close at $5.54. For the month of August, AMC is up nearly 37%. In the pre-market trading on Monday, AMC is up 2% at $5.65. Earlier in the month, AMC reported a quarterly loss of $5.38 per share. However, the company announced that it's preparing for reopening of movie theatres…