FOMC minutes are released today was a non-event with markets looking for clues on what to expect, as the Fed has hinted more easing is on its way. Negative rates are not on the agenda, (at the moment, but the bond market is not totally buying it).

Bulls betting against a ‘wave’ of risks ahead

Meanwhile, trade wars are back to the fore and markets continue to follow the COVID-19 infection data and the gradual re-opening of many countries. A second wave is a risk which markets are holding on tight fo as things start to normalise after the lockdowns.

The odds of such an outcome are apparently quite high considering there are new cases in China, Russia and even South Korea which had been praised for its containment of the first wave.

As traders. we are inherently looking to the past for clues about what could occur in the future. Unfortaubely, when we look to the influenza pandemic of 1918 which had three major waves, starting in March 1918, its peak came during a second wave late that same year.

Alarmingly, the second wave was a stronger mutation than the first version of the virus and the U.S. Centers for Disease Control and Prevention (CDC) has said the second wave was responsible for the majority of the deaths in the US — the flu’s likely country of origin.  It is also worth noting that a third wave came in early 1919 and lasted until mid-year when, according to the CDC, the Spanish flu “subsided.”

In terms of trade wars, while Australia may not wish to admit it is in a trade war with China, seeking to avoid protracted negotiations, the latest is that it is preparing to take China to the World Trade Organisation if it does not reverse its decision to impose up to 80% tariffs, or, $1 billion in barley exports.

The tariffs follow an Australian and US lead push for a global coronavirus investigation from which originated in China’s wet markets. There is a motion to establish an independent inquiry into COVID-19 is expected to pass the World Health Assembly on Tuesday night after the European Union and Australia secured the support of more than 120 other countries.

Then, when we look at the yuan and China’s trade war with the US, the greenback is likely to remain in favour. AUD/CNH has rallied to a 78.6% Fibonacci retracement level and to the 2019/2020 prior support level. Should the dollar come back into vogue and trade wars really start to take up the front pages, we would expect to see AUD take the brunt of it with little room for AUD/CNH to go but plenty of downside in AUD/USD below 0.6680.

Keeping an eye on US equities and the 61.8% Fibos

“Our sceptical attitude toward this bounce in risk keeps our focus on the AUD. With AUDUSD’s persistent correlation to global equities, we think any correction there will also be seen in the FX market,” TD Securities argue adds.

At the start of the week, we were looking at the US benchmarks as a guide and the 61.8% Fibonacci retracements: 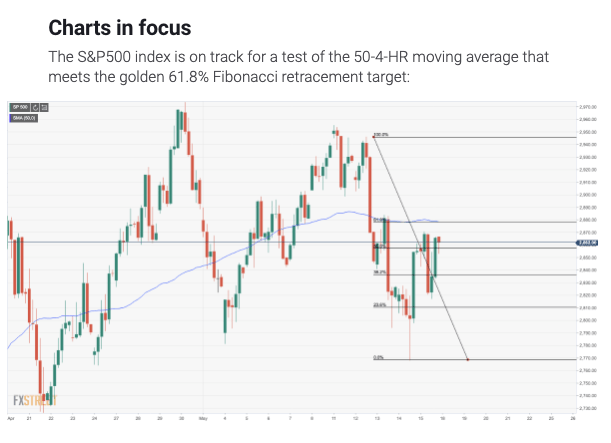 The market is testing this critical level this week (depending on chart source) and today has been another day where the resistance of the 61.8% is holding up which does not bode well for AUD longs. 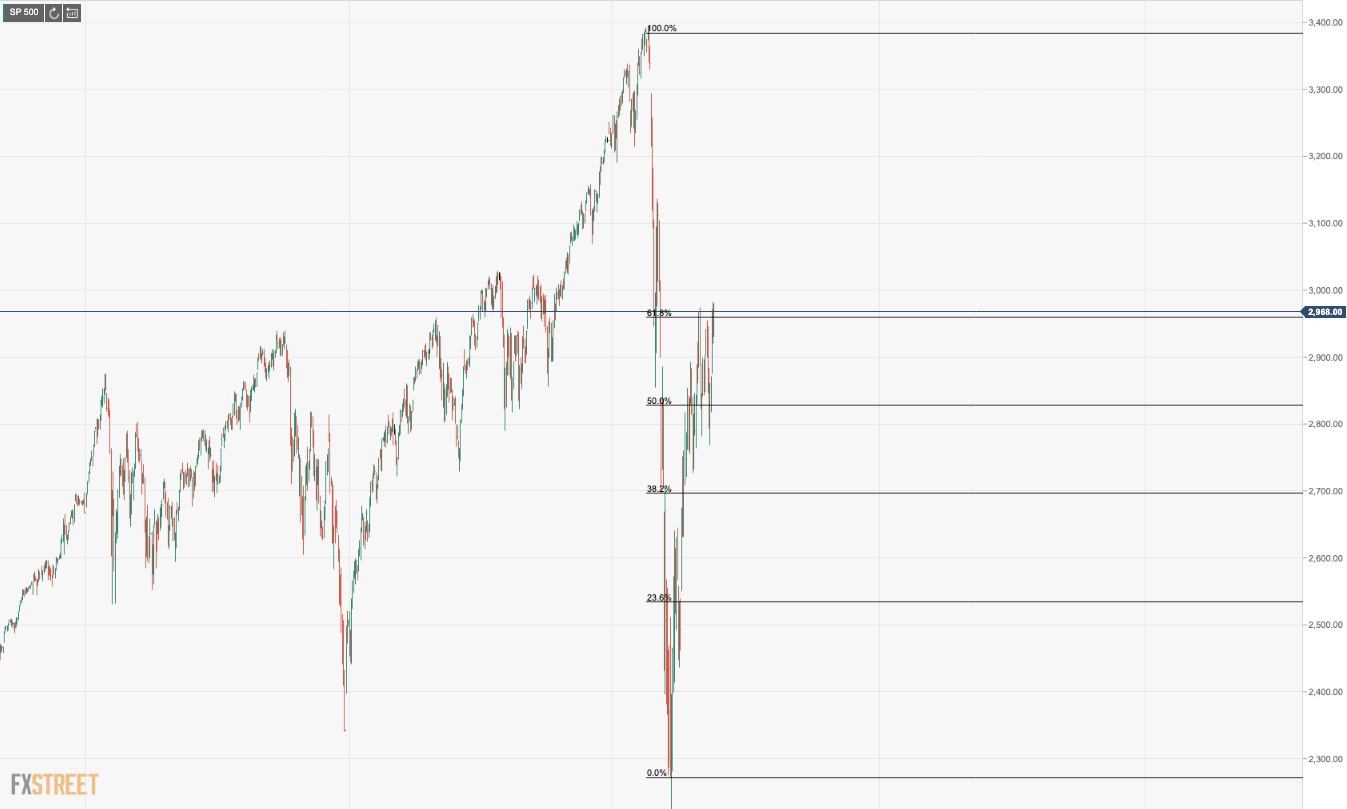 AUD/USD bears are lurking, depending on equities.  Trade wars, COVID-19 and the US dollar threaten the market's fascination with long AUD.  Committed bulls seeking a test of the 200 DMA, 0.6660s. FOMC minutes are released today was a non-event with markets looking for clues on what to expect, as the Fed has hinted more easing is on its way. Negative rates are not on the agenda, (at the moment, but the bond market is not totally buying it).  Bulls betting against a 'wave' of risks ahead Meanwhile, trade wars are back to the fore and markets continue to follow the COVID-19 infection data…