Latest
You are at:Home»FXStreet News»AUD/USD Price Analysis: Bulls looking to build on the momentum beyond 0.7300 mark

The AUD/USD pair refreshed daily tops during the early North American session, with bulls now looking to reclaim and build on the momentum beyond the 0.7300 mark. Given that the pair formed a strong base near 100-hour SMA, a sustained move beyond the mentioned level will now be seen as a fresh trigger for bullish traders.

Meanwhile, technical indicators on the daily chart maintained their bullish bias and have again started gaining positive traction on hourly charts. The set-up supports prospects for additional gains. Hence, a subsequent strength towards the 0.7360 level, en-route the 0.7400 mark, now looks a distinct possibility.

On the flip side, any meaningful pullback might continue to attract some dip-buying near the 0.7260 region (100-hour SMA). Failure to defend the mentioned support, leading to some follow-through slide below the 0.7240 region, will negate the bullish outlook and turn the pair vulnerable to fall further to the 0.7200 mark.

The downward trajectory could further get extended towards the 0.7140 horizontal support before the pair eventually drops to the next major support near the 0.7100 round-figure mark. 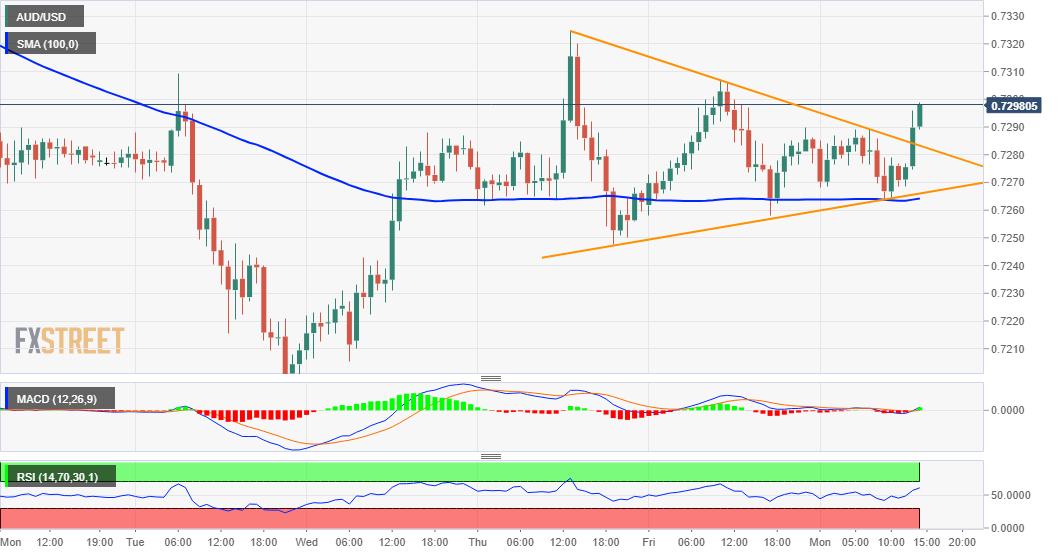 Get the 5 most predictable currency pairs
Previous ArticleTezos Price Prediction: XTZ ready to bounce to $4.5 according to technical indicators
Next Article USD/CAD continues to fluctuate in tight range below 1.3200