On a positive data for stocks, the Australian dollar, seen as a liquid proxy for risk, is up 0.4% on the having recently hit new two-year highs as rising hopes of a US stimulus bill underpin the high-betas.

While lawmakers in Washington still have not reached an agreement on economic stimulus to help relieve the impact of COVID-19 in the United States, there are signs that a $908 billion bipartisan proposal could be gaining traction.

The US President Donald Trump, meanwhile, said we are “getting very close” to a deal.

“The Speaker and Leader McConnell spoke by phone about their shared commitment to completing an omnibus and COVID relief as soon as possible,” Pelosi Deputy Chief of Staff Drew Hammill said in a tweet.

“It’s been heartening to see a few hopeful signs in the past few days” toward a deal, McConnell said of Democrats’ stance on a new aid bill.

Also, the combination of the rollout of COVID-19 vaccines is lifting spirits, expected to begin as soon as 24 hours after vaccine candidates receive emergency-use authorization from the FDA.

The dollar fell, hitting as low as 90.51 versus a basket of currencies was marking its lowest since April 2018 on the combination of the vaccine and stimulus hopes, but, technically, another story is emerging. 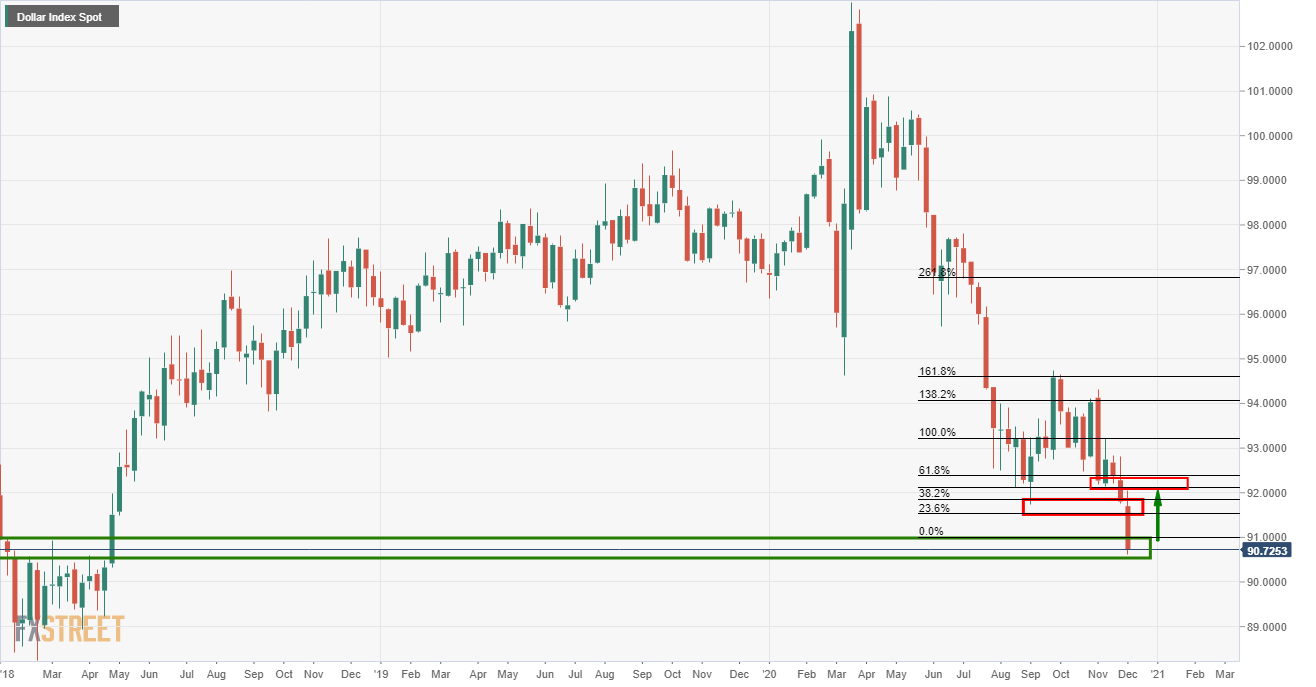 The dollar could be due a correction at this juncture where the DXY is now meeting weekly support.

Domestically, data will be a focus for the Aussie on what has been a jam-packed week on the calendar already.

This week’s stronger than the market expected Q3 GDP outcome in Australia was the first boost for the Aussie.

The Australian economy expanded by 3.3% in the September quarter following the 7% contraction in the June quarter. Annual growth has lifted from -6.4% in the year to June to -3.8% in the year to September.

This result was above market expectations of around 2.5%.

On Wednesday, the Trade Balance data was a big beat, with the surplus rising from A$5.8bn to A$7.5bn in October, beating expectations for an unchanged $5.8bn print.

”Our view is that the trade surplus will likely narrow a touch over the coming months with imports, like fuel, having scope to lift from here, in our view,” analysts at ANZ Bank explained

”This narrowing view is reinforced by the near-term outlook for exports given the trade landscape between Australia and China. We did not observe an impact on coal exports in the October data, but November may be more telling.”

Meanwhile, another piece from the local third quarter Gross Domestic Product puzzle will be the monthly Retail Sales later today.

However, investors will be wondering whether there will be any signs soon fro the Reserve Bank of Australia that it is shifting away from its relaxed stance on the relatively strong AUD.

Another risk to the Aussie is the China-Australia trade spat. There is little sign that it is abating and AUD has remained dangerously complacent to this story, so far. 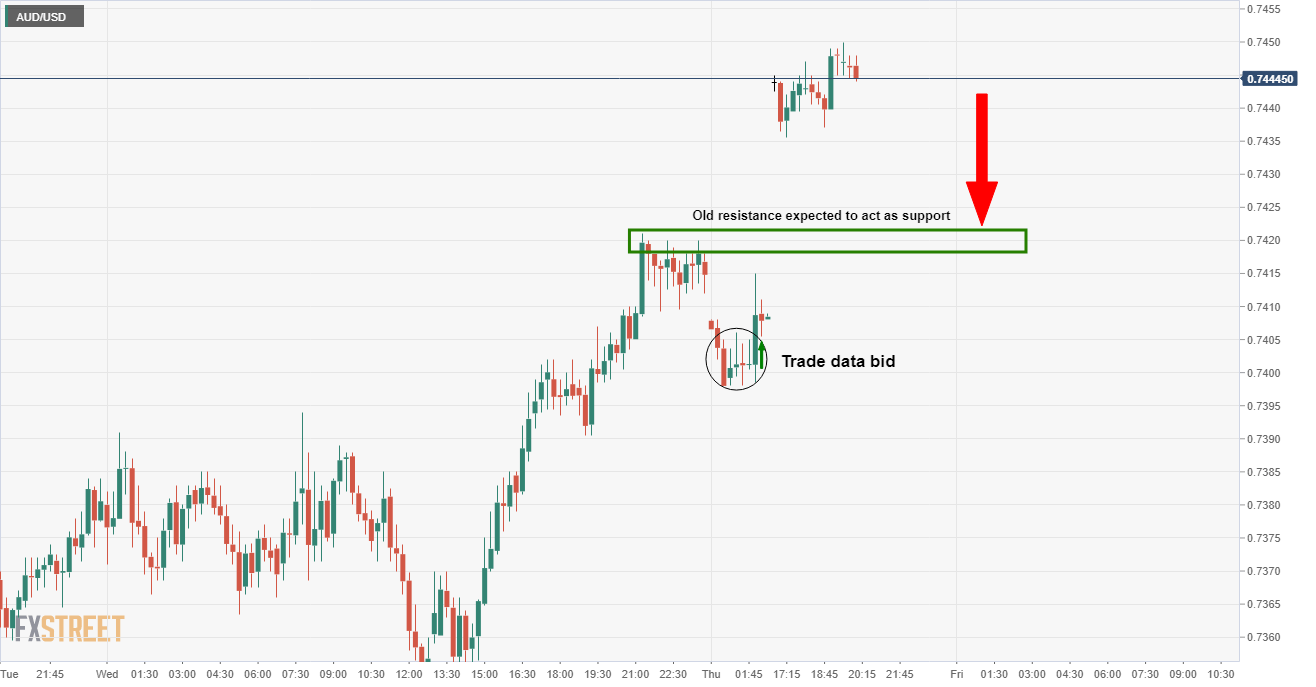 The 1.5 million mark for Covid-19 deaths has been crossed

AUD/USD is marking new cycle highs on the day and holds in positive territory. A downside correction would be expected to support at old resistance structure.  AUD/USD is trading at 0.7446 having travelled between a low of 0.7398 and a high of 0.7449. On a positive data for stocks, the Australian dollar, seen as a liquid proxy for risk, is up 0.4% on the having recently hit new two-year highs as rising hopes of a US stimulus bill underpin the high-betas. While lawmakers in Washington still have not reached an agreement on economic stimulus to help relieve the impact of COVID-19 in the United…