Latest
You are at:Home»AUD/USD Daily»AUD/USD June 03– Aussie UP Against US Dollar On

The Aussie traded higher Thursday against the US Dollar following a boosted Euro, a poorer than expected US Jobless claim report and higher than expected Australian retail sales data. This follows a string of poor US economic data. The Aussie was trading at 1.0675, up 0.57% at the time of this writing.

Here’s a quick update on technicals, fundamentals and community trends. 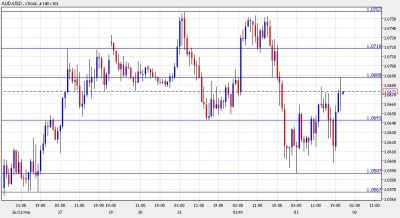 For the major events due later in the week, see the AUD/USD forecast.

Currensee Community: 59% are short, 41% are long. 2 open positions in real accounts trading this pair at the moment.  The community is currently neutral on expectations of future levels of the pair ahead.