One of the main talking points from the previous trading week, was the Aussie aggressively concluding its bullish 5-month uptrend, consequently depreciating towards its lowest valuation in nearly two months. Last week saw the release of the latest RBA minutes, and they alerted the bears. During the RBA minutes, it was announced that the RBA will maintain interest rates at a record low 2.5% for the foreseeable future.

However, this is not what necessarily caused AUDUSD weakness. The RBA also disclosed that Australia is set to welcome a period of weaker economic growth, coupled with low inflation levels, seriously questioning the mid-term prospects for the Australian economy. Previously, the Aussie had welcomed bullish momentum throughout 2014 but following the RBA’s dovish projections for the Australian economy, it now appears that the bears are set to take control.

In other news, the EURUSD is now situated at its lowest valuation since February, after further alarming economic data provided added validity to the suspicions that the ECB will look to implement further monetary easing during the next ECB meeting. The latest Purchasing Managers Index (PMI) survey dipped to 53.9 this month, down from 54.0 in April. The revelation that France drifted back towards contraction last month, was sufficient to encourage EURUSD losses. Further selling was felt on Friday, after German Business Confidence declined more than economists’ forecast, encouraging further suspicions that growth in the EU’s largest economy, will slow this coming quarter.

The EURUSD has now fallen by 300 pips over the previous few weeks, and with a high quantity of economic data released throughout the EU in the next few days, any further slip ups will award the bears with more momentum. Already, 90% of economists are predicting further ECB easing next month.

Elsewhere, the bulls regained control of the GBPUSD after BoE Governor, Mark Carney inspired traders to sell the GBPUSD the week prior. This week saw the return of UK economic performances continuing to outperform expectations with UK Retail Sales expanding annually by 6.9% in April, their strongest annual increase in a decade. The Office for National Statistics confirmed that Retail Sales accelerated by 1.3% between March and April, beating analyst expectations for a 0.5% increase.

Additionally, UK CPI (inflation) improved from a four-year low 1.6% in March, to 1.8% in April. The BoE’s inflation target is 2%, and optimists are now hoping for inflation rates to reach that benchmark figure next month. Despite Carney’s stubborn stance towards an interest rate increase during last week’s BoE Inflation Report, with economic performances continuing to outweigh expectations, the bulls are unlikely to give up hope any time soon. In fact, over the weekend it emerged from outgoing BOE Deputy Governor, Charlie Bean, that UK interest rates will reach 3% by 2017.

Moving on to the Japanese currency, and the JPY continued its recent revival over the previous week. Much anticipation was built up surrounding BoJ Governor, Kuroda’s live press conference on the 21st May. Kuroda delivered a hawkish address, where he expressed his optimism regarding improved Japanese economic data, and stated that Japan is on course to meet the BoJ’s 2% inflation target within the next year. This news quietened the bears, who were hoping for the BoJ to announce a fresh round of monetary easing. The optimism regarding Kuroda’s hawkish address suggests that any potential further easing will be delayed (if at all) for at least the next quarter. Therefore, further JPY strengthening is likely over the coming months.

In regards to the United States, economic releases were low in volume last week. However, the metric data which was released, continued to express that economic momentum was gaining speed for the world’s largest economy. For starters, US New Home Sales climbed 6.4%, their largest increase in six months. Additionally, US Markit Manufacturing PMI’s surpassed the 55.5 expectation, scoring a 56.2. Bearing in mind that not only is the United States the world’s largest manufacturer, but manufacturing is also a critical employment sector for the United States, this could bode well for next month’s Non-Farm Payroll release.

Interestingly, it also appears that we are entering the beginning phases of the Federal Reserve transitioning from a dovish tone regarding the US economy, to a more Hawkish outlook. For example, last week’s FOMC minutes indicated that the Federal Reserve have initiated discussions on raising short-term interest rates, even though they did caution during the same release that no interest rate hike was pending.

Additionally, during a recent public speaking event, Fed Chairwoman, Janet Yellen expressed that the Federal Reserve considers the US economy to be expanding, with growth set to accelerate over the latter period of 2014. Although the Federal Reserve explicitly stated that no US interest rate increase was on the agenda, the public acknowledgement that the US economy is expanding, coupled with a hawkish outlook towards the end of 2014, is substantial progress. In previous months, we became very accustomed to a far more dovish tone.

What to Watch this Week

The upcoming week is crucial for the Euro-Zone, with an aggressive quantity of economic data released throughout the EU. We are now just under two weeks away from the highly anticipated ECB Rate Decision, and I am expecting each piece of economic data to be placed under close scrutiny. This coming Tuesday, Germany Retail Sales are released, and this is followed on Wednesday, by the latest German Unemployment Rate. Previously, it was assumed that the Deutsche Bundesbank stood against any further ECB stimulus, but with recent German data raising a few alarm bells, it is now understood that they have softened their stance. Other noticeable economic releases from the European Union include; Italian CPI, EU Consumer Confidence and the Business Climate Indicator for May.

The week ahead also sees the return of US economic data, after the previous week was dominated by Federal Reserve speeches. This coming Tuesday, both Durable Goods Orders and Consumer Confidence are released from the United States. This is followed by MBA Mortgage Applications on Wednesday, and the finalized United States 1Q GDP this coming Thursday. Elsewhere, on Thursday, Japan’s latest CPI figures (inflation) are released. Last week, BoJ Governor Kuroda appeared optimistic that Japan is on course to meet the BoJ’s 2% inflation target. If Thursday’s CPI release confirms Kuroda’s assertion, further JPY strength is likely. 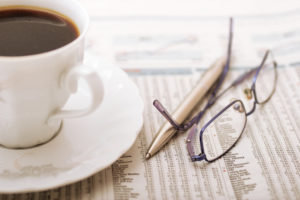 The markets according to Ed Seykota

One of the main talking points from the previous trading week, was the Aussie aggressively concluding its bullish 5-month uptrend, consequently depreciating towards its lowest valuation in nearly two months. Last week saw the release of the latest RBA minutes, and they alerted the bears. During the RBA minutes, it was announced that the RBA will maintain interest rates at a record low 2.5% for the foreseeable future. However, this is not what necessarily caused AUDUSD weakness. The RBA also disclosed that Australia is set to welcome a period of weaker economic growth, coupled with low inflation levels, seriously questioning…