Bancor became the 13th DeFi platform to join the “four comma club,” a common moniker given to projects whose total value locked (TVL) hits $1 billion or more. The development has pushed BNT price by 47% in less than four days, with more upswings on the horizon.

Bancor, an on-chain liquidity protocol, saw its TVL increase by 40% since March 1, pushing it past the billion-dollar-mark to where it currently stands. The reason for such a stark increase could be the recent announcements by the team behind the project. Some notable developments include the “gasless voting” proposal and the new vBNT burn mechanism.

The gasless voting mechanism proposed has received backing from the Bancor team, who tweeted,

In doing so, the expensive voting system, which cost an average of $50 in gas fees, will now be eliminated, allowing all users to participate in the BancorDAO governance actively.

“a flat 5% insurance premium on swap revenues from both the TKN, and BNT side of all pools.”

Since users receive vBNT to stake their BNT tokens, it incentivizes market participants to buy and lock the native token on the protocol. Burning vBNT via the newly proposed mechanism causes a negative supply shock, creating a demand for the BNT token, which pushes its market value higher.

In general, both of the recent developments have helped increase user adoption, contributing to the rise in TVL and increasing the fundamental value of the protocol and its token.

Bancor price poised for an upswing

Bancor price has fully recovered from the correction seen between February 21 and 28. The recovery resembles a rounded bottom pattern that forecasts a 34% upswing from the break of the $6.70 resistance.

Since Bancor price currently trades around the supply barrier at $6.69, a 4-hour candlestick close above it will confirm the start of a 34% rally, which puts BNT at $9.

However, this is unlikely as the Tom DeMark (TD) Sequential indicator has flashed a sell signal in the form of a green nine candlestick on the 4-hour chart. This setup forecasts a one to four candlestick correction before the uptrend resumes. 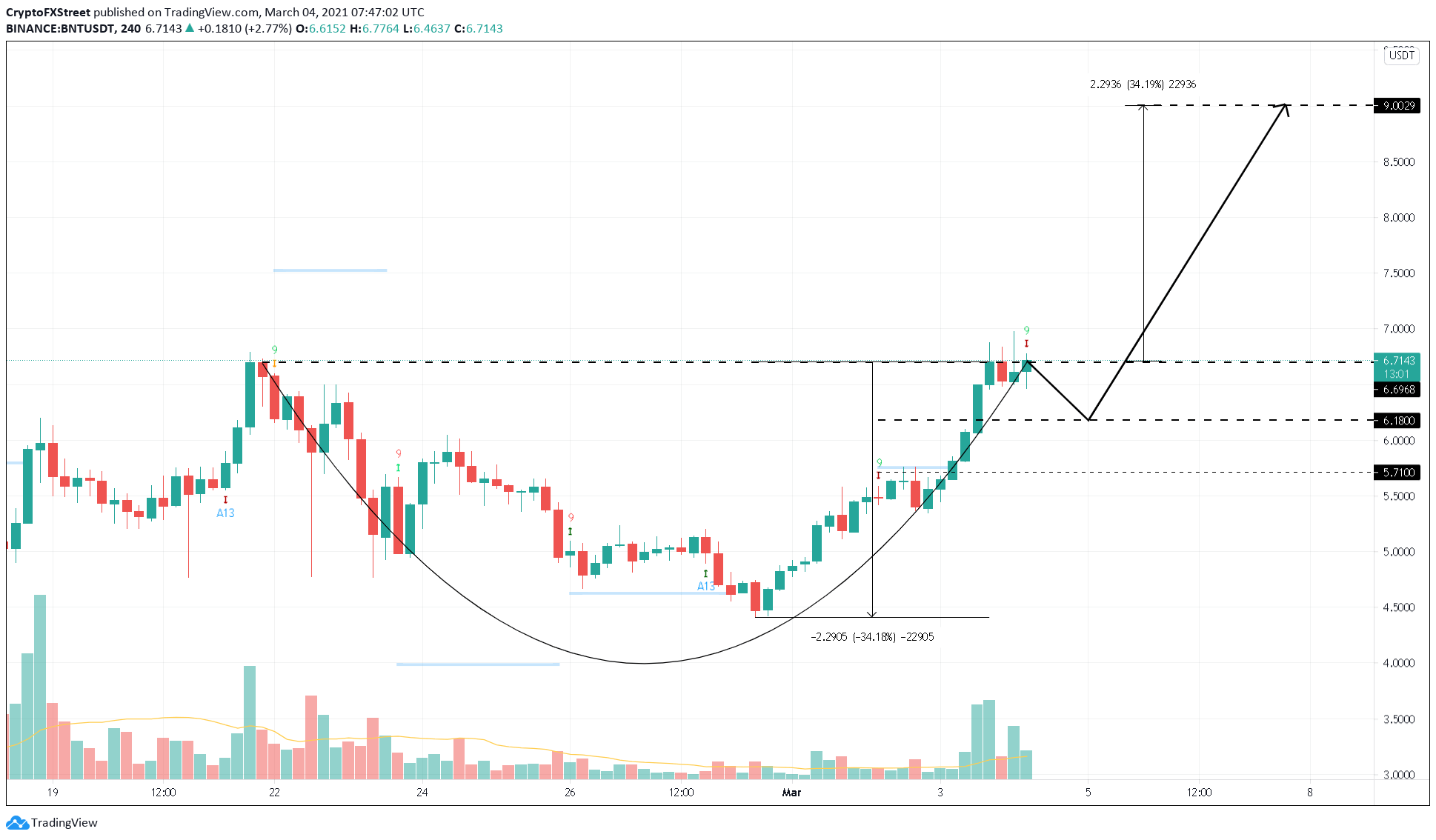 In the event of a correction, IntoTheBlock’s In/Out of the Money Around Price (IOMAP) model reveals a stable support barrier at $6.18. Here, 1,150 addresses hold nearly 4.11 million BNT tokens.

If Bancor price manages to bounce from $6.18 and push past the resistance at $6.70, then the rounded bottom pattern will evolve into a cup and handle formation, maintaining a similar 34% target.

Investors should note that a spike in selling pressure leading to a 4-hour candlestick close below the $6.18 level will result in a 7% downswing. Bancor price will likely drop to $5.71 if this were to happen.

Bancor Protocol's total value locked surpasses $1 billion in cryptocurrency assets. Other developments surrounding the project have pushed BNT's price by 47% in less than four days. If the bullish momentum persists, this cryptocurrency could surge another 35% to hit $9. Bancor became the 13th DeFi platform to join the "four comma club," a common moniker given to projects whose total value locked (TVL) hits $1 billion or more. The development has pushed BNT price by 47% in less than four days, with more upswings on the horizon. Gasless voting and new burn mechanism pave the way Bancor, an on-chain…