Bitcoin price continues to struggle to reach a record high above $60,000. However, BTC demand and on-chain data suggest a bullish outlook for the pioneer cryptocurrency.

The amount of Bitcoin held in exchange wallets has been in decline, which means that investors are now hodling their BTC and are in no rush to deposit to sell their cryptocurrencies.

Long-term holders and Bitcoin miners have started to accumulate Bitcoin, which reflects the low outflow of Bitcoin entering the market. According to analyst Willy Woo, Miners has also surpassed their 2017 bull run revenues, which marks as the halfway point in the Bitcoin bull run. As such, it is “intermission time” while Bitcoin’s bull market top points to a target above $300,000, Woo stated.

Adding to the optimism for a new Bitcoin price all-time high, senior commodity strategist Mike McGlone said the cryptocurrency has far to go before it reaches a cycle top.

McGlone described Bitcoin’s current sideways movement as a “caged bull,” and with the declining supply and increased demand from institutions, he expects BTC to see continued price appreciation. He explained:

Still in Price-Discovery Mode, Bitcoin Plateau Appears Distant – Bitcoin supply is declining, and demand is rising, leading us to expect continued price appreciation and the establishment of a higher plateau as the crypto matures.

According to McGlone, Bitcoin is a caged bull and is “well-rested to escape.” McGlone and other Bloomberg researchers set a bullish target for BTC price at $400,000 if the cryptocurrency follows the trends in previous bull runs.

Additionally, the Bloomberg strategists outlined $50,000 as baseline support and acknowledged $60,000 as the key resistance in Bitcoin’s price climb. However, this resistance level could be “eroding” as massive institutional adoption continues.

Although the market sentiment around Bitcoin on social media platform Twitter has been negative, according to crypto behavioral analytics firm Santiment, this could indicate an increased likelihood of a price surge. 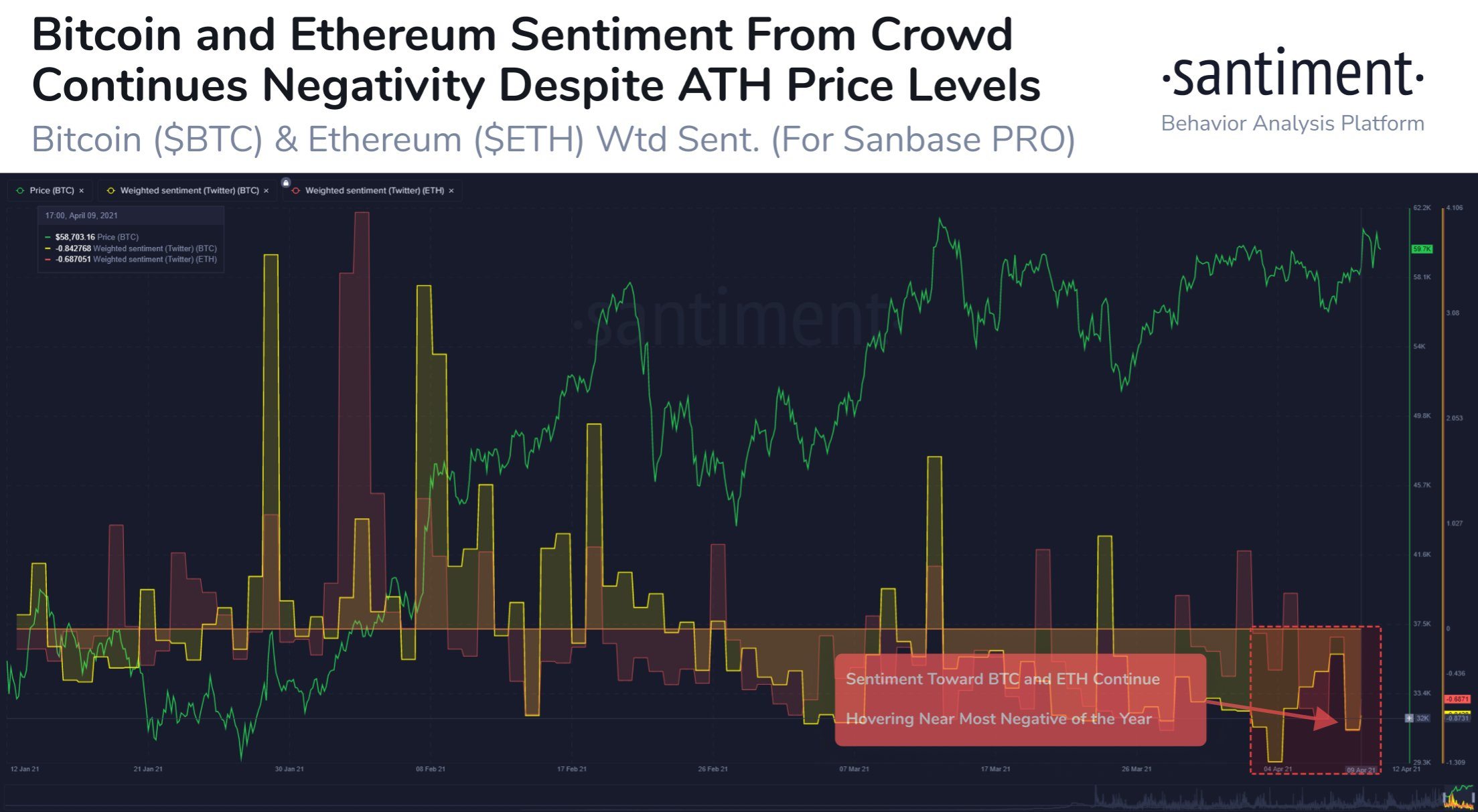 While Bitcoin price has still yet to overcome its hurdle to rally higher, fundamentals, including its continued depletion of supply and rising demand from institutional investors, could make a case for an anticipated bull run.

The market has witnessed growing excitement in anticipation of the Coinbase direct listing scheduled for April 14 and the growing number of Bitcoin exchange-traded fund (ETF) applications in the United States.

Galaxy Digital has become the latest to file a Bitcoin ETF – a fund that offers BTC exposure to institutional investors without holding the underlying asset. Currently, Galaxy is already acting as a sub-advisor to a Canadian Bitcoin ETF by CI Financial, which began trading on the Toronto Stock Exchange in March.

The filing for a Bitcoin ETF with the US Securities & Exchange Commission (SEC) comes following a solid Q4 report from the firm. Galaxy has witnessed growth across asset management, trading, and mining.

The crypto bank’s filing follows several other submissions, including NYDIG, Fidelity, First Trust and SkyBridge. The approval of Bitcoin ETFs in Canada and Brazil could pressure US regulators into following in the same footsteps, which Bloomberg indicated as “another bullish milestone” for Bitcoin.

Bitcoin miners continue to accumulate the cryptocurrency as we approach the halfway point in the BTC bull run. Bloomberg analyst Mike McGlone indicates Bitcoin is in price discovery, far from reaching the cycle top. Galaxy Digital joins the latest race to offer an approved Bitcoin ETF in the United States.   Bitcoin price continues to struggle to reach a record high above $60,000. However, BTC demand and on-chain data suggest a bullish outlook for the pioneer cryptocurrency. Bitcoin to see continued price appreciation The amount of Bitcoin held in exchange wallets has been in decline, which means that investors are…