Bitcoin Cash Price has plummeted 10% from yesterday’s high of $655, coinciding with the 200-day Simple Moving Average (SMA) to a low of around $591 recorded earlier today. With this drop, BCH has flipped the 200 SMA from resistance to support.

Currently, Bitcoin Cash price is trading in the green at $611.11 with bulls trying their best to hold above the $600 psychological level.

Bitcoin Cash price seems to be snubbing the news that PayPal was going to allow its UK customers to buy, sell and hold BCH.

On Monday, PayPal opened crypto services to its UK customers allowing them to sell and store Bitcoin Cash (BCH) and other major cryptocurrencies such as Bitcoin (BTC), Ether (ETH), and Litecoin (LTC) through PayPal’s website and mobile app.

The announcement helped boost an already-recovering crypto market, with Bitcoin Cash price rising 7% on Monday, as reaction to the news. The news also saw Bitcoin (BCH) shatter the $50,000 mark hitting a three-month high.

The announcement follows PayPal’s provision of crypto services to US customers launched earlier this year. PayPal plans to scale the roll-out to more than 403 million of its international customers by the end of 2021.

“The pandemic has accelerated digital change and innovation across all aspects of our lives — including the digitisation of money and greater consumer adoption of digital financial services.”

This announcement was welcomed by industry figure. For example, Laith Khalaf, an investment analyst at the financial firm AJ Bel welcome the development saying he expected the service to be enter the UK at some point. Speaking to The Guardian, Khalaf said, signs that investors were “leapfrogging traditional forms of savings and diving in at the deep end by investing in crypto” were all over at that regulators were concerned about the potential for consumer harm posed by volatile pricing. He was, however, positive about PayPal’s news saying that its “…presence is positive in that it is a high-profile, publicly listed company, which is already subject to regulatory scrutiny. But overall the crypto craze remains a worry for consumer advocates and regulators.”

The leader in this space is Strike, which allows virtually feeless buying, selling, transferring and receiving of Bitcoin. However, Strike does not provide access to Altcoins. PayPal’s provision of altcoins like Bitcoin Cash could help push the price of BCH even higher

However, after rising 7% on Monday following the news, BCH corrected to lows $600 as earlier seen today, indicating that more fundamentals could be needed to push the altcoin higher.

The short-term Bitcoin Cash Price Prediction as BCH/USD price continues to be rejected by the 200-day SMA since August 24. This warranted a sell-off as bulls retreated to seek support above the $600 psychological level as seen on the daily chart.

The bulls must keep the price above $600, a move that could ensure market stability and increase the chances of the Bitcoin Cash price turning bullish. In the meantime, remaining above the $591 major support level will favour the bulls, but breaking above the 200-day SMA at $660 will increase the odds of overcoming the intraweek high at close to the $700 psychological level.

Trading above this level may trigger more buy orders as speculation mounts for gains towards the May 20 high at $866. Investor interest is expected to shoot up, especially after more fundamentals kick in.

This bullish outlook is validated by the upward movement of the RSI away from the sell zone.

Moreover, the BCH’s immediate resistance at around the $643 appears robust. According to IntoTheBlock’s IOMAP on-chain metrics, this areas is within the$627 and $643 investor cluster where roughly 198,660 addresses previously bought  approximately1.17 million BCH. These investors may wish to break even as the price rises, dampening any bullish pressure.

On the downside, a daily closure below this immediate support at $591 may trigger sell orders which would see Bitcoin Cash seek for support from the 100 SMA at $572 and the 50 SMA at $552 respectively.

How to Buy Bitcoin Cash

If you would like to know how to buy BCH, the top exchanges for trading in BCH currently are: eToro, FTX, Binance and Coinbase. You can find others listed on our crypto exchanges page. 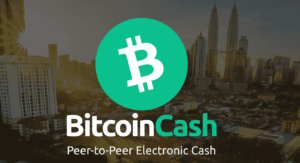 Bitcoin Cash price tanks below the 200 SMA to seek refuge above the $600          psychological level. BCH price prediction in the short-term is bearish as indicated by the MACD indicator. IntoTheBlock’s IOMAP model shows that BCH is facing stiff resistance around the $643 level. Bitcoin Cash Price has plummeted 10% from yesterday’s high of $655, coinciding with the 200-day Simple Moving Average (SMA) to a low of around $591 recorded earlier today. With this drop, BCH has flipped the 200 SMA from resistance to support. Currently, Bitcoin Cash price is trading in the green at $611.11…