Bitcoin bulls have had a short glimpse of victory only to suffer a bitter disappointment this week. While bears gave away some ground and allowed the price to recover deeper into $8,000-$9,000 range, they may still have revenge as long as the price stays below significant technical levels that separate us from a full-fledged recovery.  What’s behind the price movements of the week and what to expect next? Read on to know the answers.

What’s going on in the market

The cryptocurrency market has been at the mercy of sentiments, rumors and whales activity. No surprise here, actually.

Regulators and governments are still skeptical about digital currencies. A new portion of harsh comments has come our way this week, though the market participants seem to get adapted to them. Many cryptocurrency proponents believe that mass adoption is a matter of time, and no external force can stop this process.

Thus, the head of the Russian central bank Elvira Nabiullina said that national digital currencies were risky, while the benefits were still unclear. Speaking at the forum of innovative financial technologies Finopolis, she confirmed that the central bank was investigating the concept pf CBDC (Central Bank Digital Currencies), but at that stage, there were no plans to create it.

Meanwhile, US Senators urged Visa, Mastercard and Stripe to back off the Libra project. Two senators  – Sen. Sherrod Brown of Ohio and Sen. Brian Schatz of Hawaii – believe that the payment giants should follow the example of PayPal’s and leave the project that may eventually harm their business.

Read more on this: Twitter reacts to US Senators warning Visa, Mastercard and Stripe about Libra involvement

EU and British authorities also continued panting apocalyptical pictures of economic collapse and social divide caused by Libra launch. Notably, the crypto community is also skeptical about the virtues of the digital money offered by Facebook. Obviously, many industry players do not believe that the social media giant will not retain control over the coin. Some of them even ventured their open-source Libra.

Read more on this: The crypto community aims to create a non-corporate version of Libra

Despite some wild gyrations during the week, BTC/USD is still locked in $8,500-$7,700 range. An attempt to break above SMA200 (Simple Moving Average) on a daily chart was a good one, though the price could not keep up the momentum and slipped back towards $8,350 by the time of writing.

This brings is back to the support and resistance levels we identified during the previous week. Thus, bitcoin bulls still desperately need to push the price above $8,600-$8,650 level to improve the technical picture and allow for an extended recovery towards $9,000. We will need to see a sustainable move above this handle to escape the bearish scenario. However, even if this happens, we are not out of woods yet. Another strong resistance at $9,200 created by SMA300 four-hour and 61.9% Fibo retracements for the recent downside move will block the way to the North.

Another strong resistance awaits bitcoin bulls on approach to $9,500. The upper boundary of the Bollinger Band and SMA50 on a daily chart will make it strong enough to stop or slow down the recovery.

On the downside, a sustainable move below $8,000 will negate a positive scenario and open up the way towards the support of $7,700. This area includes SMA100  on a weekly and the lowest level of this week. Notably, BTC/USD has been trading above SMA100 weekly since the beginning of May, while $7,700 barrier at least four times since September 26. It means that it won’t be easy for bitcoin bears to push the price below this handle.

Though, once this happens, the sell orders will start snowballing with the next support at $7,400 (the low line of the  Bollinger Band on a daily chart). and at psychological $7,000. If it is cleared, the sell-off is likely to gain traction with the next focus on  $6,700 (SMA50 weekly).

The Forecast Poll of experts worsened significantly since the previous week. Expectations on all timeframes are mostly bearish. The average price forecasts stays  well below 9,000. 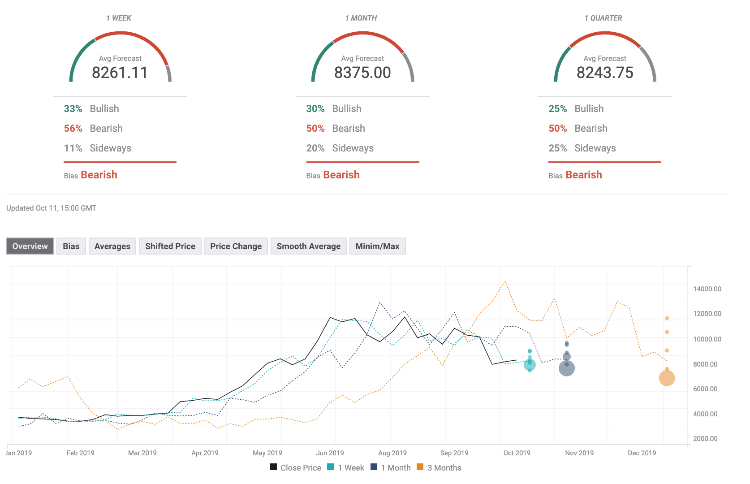 The cryptocurrency market is still in the good old range. Bitcoin's technical picture is full of uncertainty as SMA200 remains unbroken. Bitcoin bulls have had a short glimpse of victory only to suffer a bitter disappointment this week. While bears gave away some ground and allowed the price to recover deeper into $8,000-$9,000 range, they may still have revenge as long as the price stays below significant technical levels that separate us from a full-fledged recovery.  What's behind the price movements of the week and what to expect next? Read on to know the answers. What's going on in the…