Investment firms have been absorbing  massive amounts of Bitcoin, as exchange-traded BTC vehicles now manage $46  billion worth of the cryptocurrency.

Since February 2021, the amount of Bitcoin supply in the network has grown more than the circulating supply since 2017. The pioneer digital currency, with its advantage of scarcity “”  a limited supply of 21 million “” has seen its liquid supply continuously decrease.

Institutional demand for the leading cryptocurrency has not been slowing down. Nasdaq-listed firm MicroStrategy continues to stack sats, with its CEO Michael Saylor even turning to debt offerings to finance purchases of Bitcoin worth billions.

Exchange-traded Bitcoin investment vehicles currently have over 800,000 BTC under management, roughly 4.3% of the circulating supply of the digital asset. More than 100,000 BTC has been absorbed by Bitcoin funds since the start of 2021.

Grayscale Investments continue to dominate the space, accounting for 82% of the market, equivalent to $34.7 billion worth of Bitcoin. However, Grayscale’s dominance in the market has declined as three Canadian exchange-traded funds (ETFs) have been approved in the country, according to Arcane Research

The Canadian Bitcoin ETFs, including Purpose ETF, Evolve ETF, and Galaxy ETF now account for 2.5% of the market share. Just after one month of the launch of the world’s first Bitcoin ETF by Purpose Investments, the product’s assets under management has crossed $1 billion. 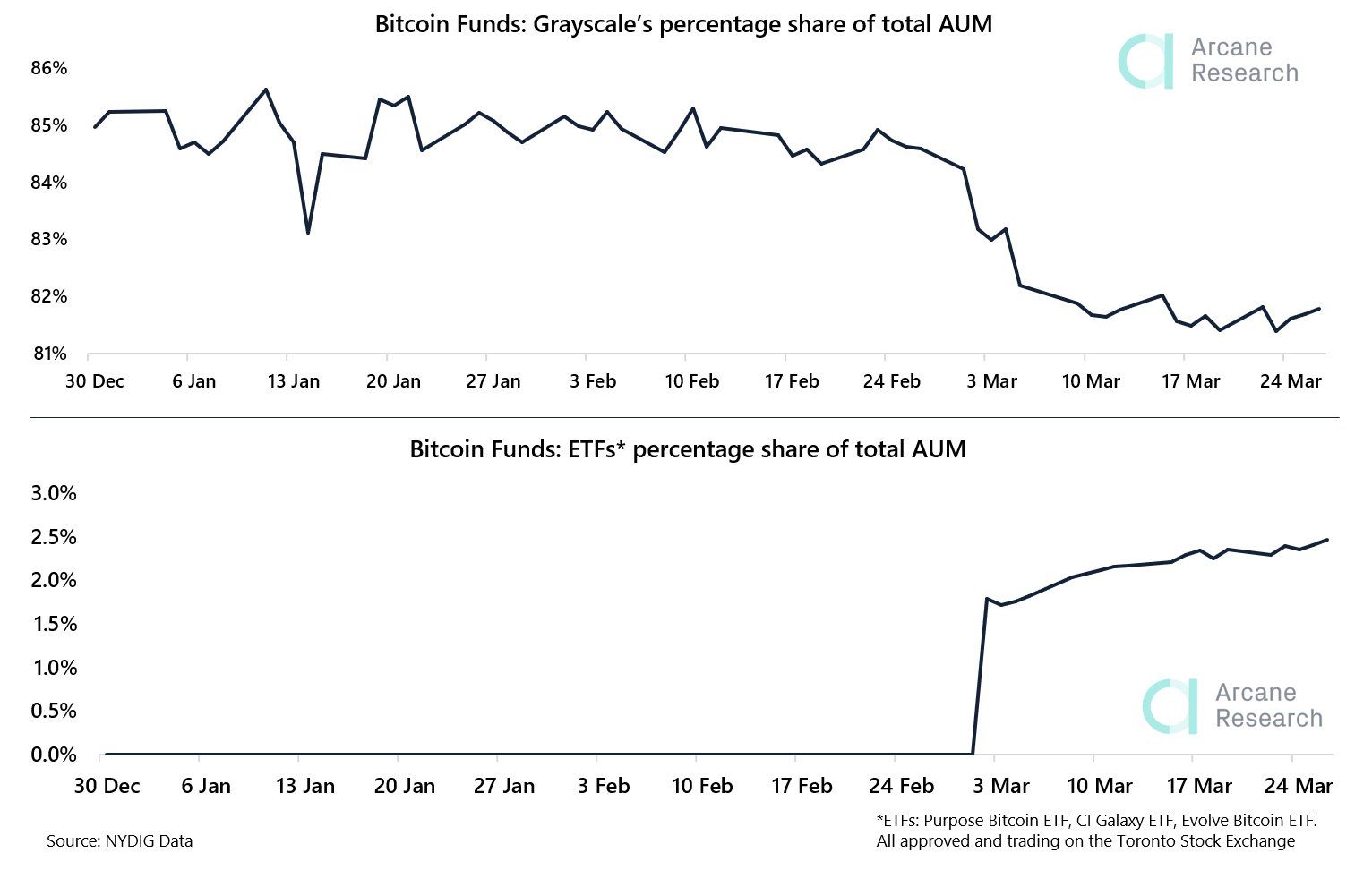 ETFs are a type of investment product that tracks the prices of certain underlying assets. These investment vehicles enable institutional investors to get exposure to the cryptocurrency  without holding the digital asset itself. According to JPMorgan, most asset managers still prefer Bitcoin in the format of a fund.

Although three crypto ETFs have been approved in Canada, the Securities & Exchange Commission (SEC) has turned down all applications for Bitcoin ETFs so far;  therefore these products are unavailable in the United States.

VanEck, Fidelity Investments, and SkyBridge Capital have recently applied for Bitcoin ETFs with the SEC.  However, the securities regulator has not decided to reject or accept these applications.

As the SEC has acknowledged VanEck’s Bitcoin ETF proposal, the clock started ticking as the regulator has 45 days to approve, deny, or prolong its review of the proposal.

However, as institutional demand increases for exposure to the leading cryptocurrency, it could just be a matter of time before Bitcoin ETFs get approved in the country. According to John Davi, CEO at Astoria Portfolio Advisors, the Biden administration has appointed officials to the SEC who have expertise in cryptocurrencies may speed up the approval process. He added:

It’s just a matter of time. I think the time has come and there is a place in people’s portfolio for digital assets.

Although flows into cryptocurrency investments remained positive for the week ending March 27, the net inflows of $21 million were the lowest in six months. This was the lowest level since October 2020, when Bitcoin was trading at the $14,000 price level.

According to the CoinShares report, investor appetite for digital currencies seemed to have waned, coupled with the horizontal movement of the Bitcoin price. Institutions were taking profit  to lock-in some of their unrealized gains.

Bitcoin's liquid supply continues to decrease as institutions are stockpiling the leading cryptocurrency. After Canadian Bitcoin ETFs were approved in the country, Grayscale's dominance in the market declined.   It could just be a matter of time until Bitcoin ETFs are approved by the United States Securities & Exchange Commission. Investment firms have been absorbing  massive amounts of Bitcoin, as exchange-traded BTC vehicles now manage $46  billion worth of the cryptocurrency. Investment vehicles have 4.3% Bitcoin's circulating supply Since February 2021, the amount of Bitcoin supply in the network has grown more than the circulating supply since 2017. The pioneer…