Home » Bitcoin holders are no longer willing to sell, paving the way for new bull run to $50,000

Bitcoin holders are no longer willing to sell, paving the way for new bull run to $50,000

Bitcoin had a gruesome trading session last week, which saw it tumble from highs around $38,000 to levels under $30,000. The flagship cryptocurrency hit a low of $28,878 (on Coinbase) On Friday before embarking on recovery.

Meanwhile, the uptrend has been gradual, with the upside capped under $35,000. The price is doddering slightly above $32,000 amid a push by the bulls to regain control. Despite the drop, holders are unlikely to sell because they anticipate Bitcoin’s uptrend resumption.

The Adjusted SOPR (aSOPR) by Glassnode, a leading cryptocurrency on-chain analysis platform, has reset, bringing to light the notion that holders no longer want to sell their BTC but are looking forward to the continuation of the uptrend.

As explained here, the SOPR is an indicator calculated by dividing the realized value of BTC (in USD) by the value at creation (in USD) of output, or simply the price sold divided by the price paid. On the other hand, the aSOPR refers to the SOPR indicator ignoring all outputs with a lifespan of less than an hour.

The aSOPR fell sharply last week, as discussed. However, the indicator has reset, implying that the holders transacting BTC every hour, on a 24-hour trailing average, are averagely unwilling to sell even at a profit.

To get a SOPR value of one or below, holders must be willing to empty their bags, perhaps at a loss. A situation that is doubtful when the current state of the market is taken into consideration. 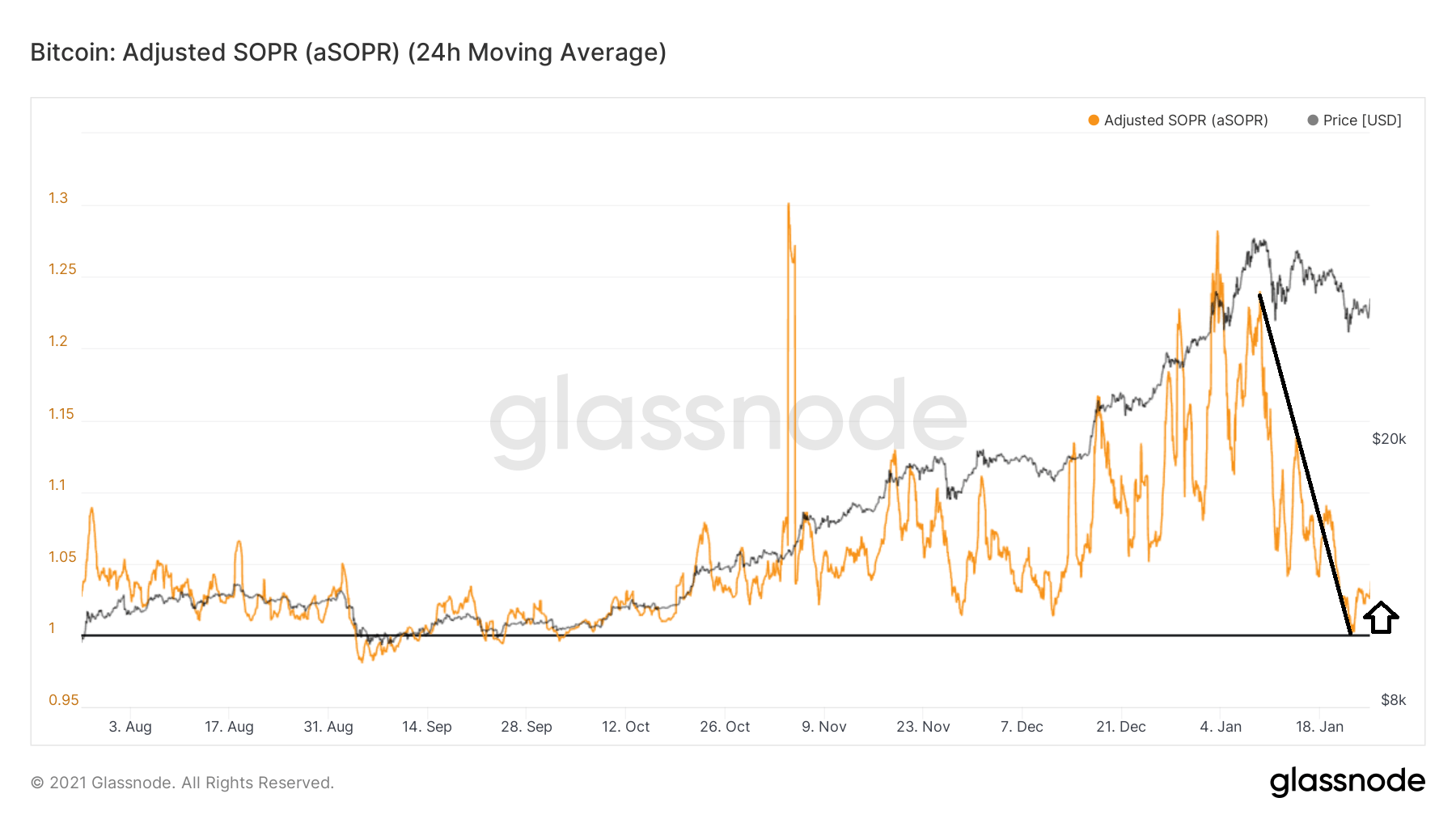 Bitcoin whales increase as the price hunts for a higher low

The number of large volume holders of Bitcoin (with 1,000 or more coins), commonly referred to as whales, have been growing consistently despite recently surpassing the all-time high. Roughly 185 new whales have been created since the beginning of January, representing an 11% increase. 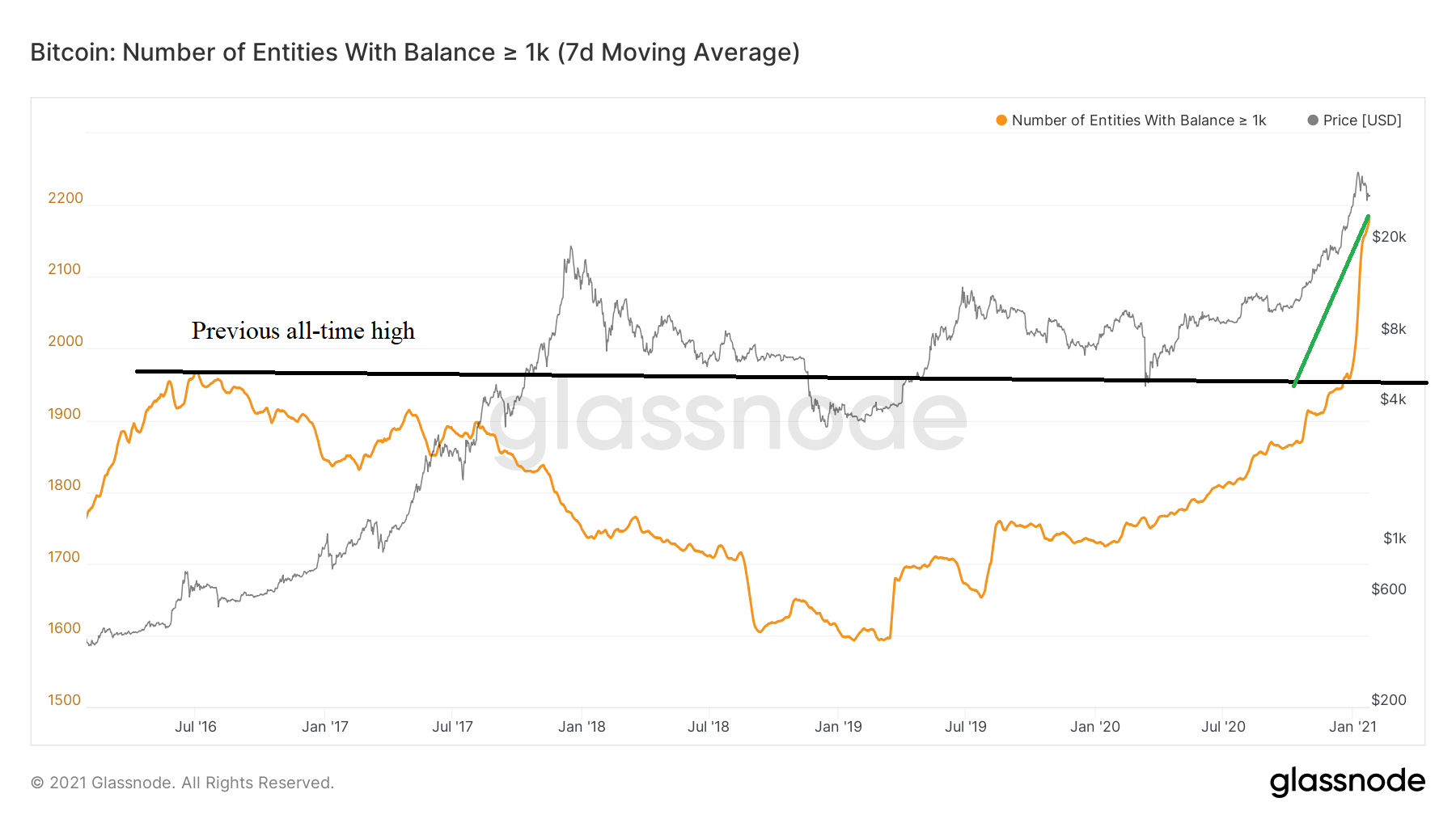 The increase is the speediest in the history of Bitcoin. In other words, whales are getting more attracted to BTC, while a spike in over-the-counter (OTC) deals hint at institutional investors’ escalation. As demand for BTC rises among large volume holders, Bitcoin tends to flip bullish.

The influx of funds into the digital asset market hit a record $1.3 billion, according to CoinShares, an asset management firm. As Bitcoin and other cryptoassets tumbled last week, investors rushed to take advantage of the dip and buy more. A statement made by CoinShares to Reuters says that:

“The recent price weakness, prompted by recent comments from Secretary of the U.S. Treasury Janet Yellen and the unfounded concerns of a double spend, now look to have been a buying opportunity with inflows breaking all-time weekly inflows.”

The lion’s share of the crypto inflows went to Bitcoin with Ethereum, the largest altcoin coming second at $34 million. Trading volumes for Bitcoin have also significantly increased from a 2020 average of $2.2 billion per day to $12.3 billion in 2021.

Glassnode highlights that Bitcoin’s NUPL (Net Unrealized Profit/Loss) is almost shooting above the green region (representing belief). A move into the next band, euphoria (blue), will most likely signal a global top. History shows that a reversal occurs after the NUPL hits the euphoria range. 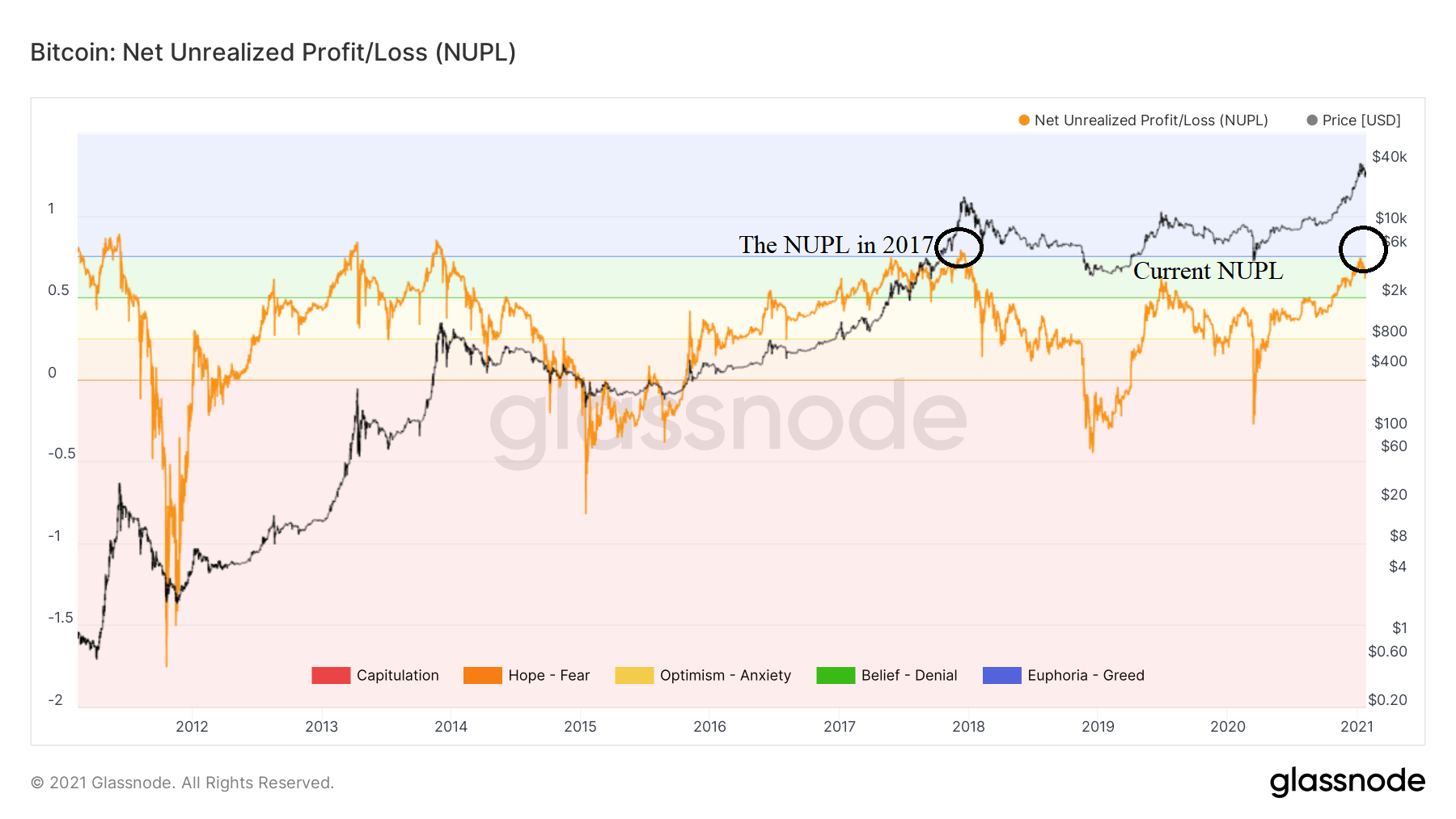 On the other hand, if the price is rejected again at the 200 SMA, overhead pressure will increase. The support at $31,000, although crucial, does not seem strong enough and might not hold if retested again. Hence, Bitcoin is not out of the woods yet and may break $28,000 and $25,000, respectively.

Bitcoin's Adjusted SOPR resets, indicating that investors are unwilling to sell at a profit. Holders with at least 1,000 BTC increased 11% in January alone, signaling a bullish outlook. Cryptocurrency inflows hit a $1.3 billion record high last week as investors bought the dip. Bitcoin price is struggling to sustain the uptrend while putting pressure on the $31,000 support; unlikely to hold. Bitcoin had a gruesome trading session last week, which saw it tumble from highs around $38,000 to levels under $30,000. The flagship cryptocurrency hit a low of $28,878 (on Coinbase) On Friday before embarking on recovery. Meanwhile, the…