Over a week ago, the author of Rich dad, poor dad, Robert Kiyosaki, said that Bitcoin would crash when a COVID 19 vaccine would be approved. Many people caught up the narrative, based on the assumption that Bitcoin is used as a safe-have asst and would go don once the market sentiments improve.

The vaccine will give a glimmer of hope that the second wave can be mitigated, and new full-scale lockdowns won’t ruin the economy. In this case, the central banks would eventually slow down their printing presses and, in the long run, start unwinding uber-accommodative policy measures. The investment flows would reverse from safe-haven assets to risky markets.

According to Kiyosaki, the massive investment outflow from Bitcoin, gold, and silver will be short-lived and present a buying opportunity for long-term investors. The real problem is deeper than the pandemic and has to do with the fact that the US economy is virtually bankrupt.

Meanwhile, the vaccine per se has little impact on the cryptocurrency market, influenced by a combination of external and internal factors. As the FXstreet previously reported, Bitcoin is now correlated with the traditional markets and tends to go down in lockstep with stock markets and other risky assets.

Even though the mass vaccination might ease the fear, lingering presidential elections in the US and the flaring conflict between Washington and Beijing will continue weighing down on the market sentiments and force investors to sell everything except for cash. The turbulence and anti-risk sentiments will dominate both traditional and cryptocurrency markets until the pre-election jitters are over.

Thus, fundamentally, BTC may continue moving down in sync with the sentiments on the traditional market. However, longer-term perspectives remain bullish.

Once the panic is over, investors’ attention will return to the core issues that plague the global markets and the financial system, including inflationary pressure and soaring sovereign debts. Remember that Bitcoin was created to answer the global financial crisis, and this narrative will serve as a robust bullish catalyst for BTC.

On a weekly chart, BTC/USD has returned all the previous week’s gains after a failure to settle above $11,000. The critical support area is created by the psychological $10,000, reinforced by the weekly SMSA50 at $9,800. This technical barrier has been limiting the decline since the end of April. Moreover, several breakthrough attempts verified its strength in September. Most likely, the downside correction will stop here. The bulls will get a chance to make another attack at $11,000.

However, once $9,800 gives way, weekly SMA100 at $9,200, followed by will come into focus. BTC may retreat to $9,000 before another strong bullish wave is created, as we have previously reported. Read the more elaborated technical analysis here. 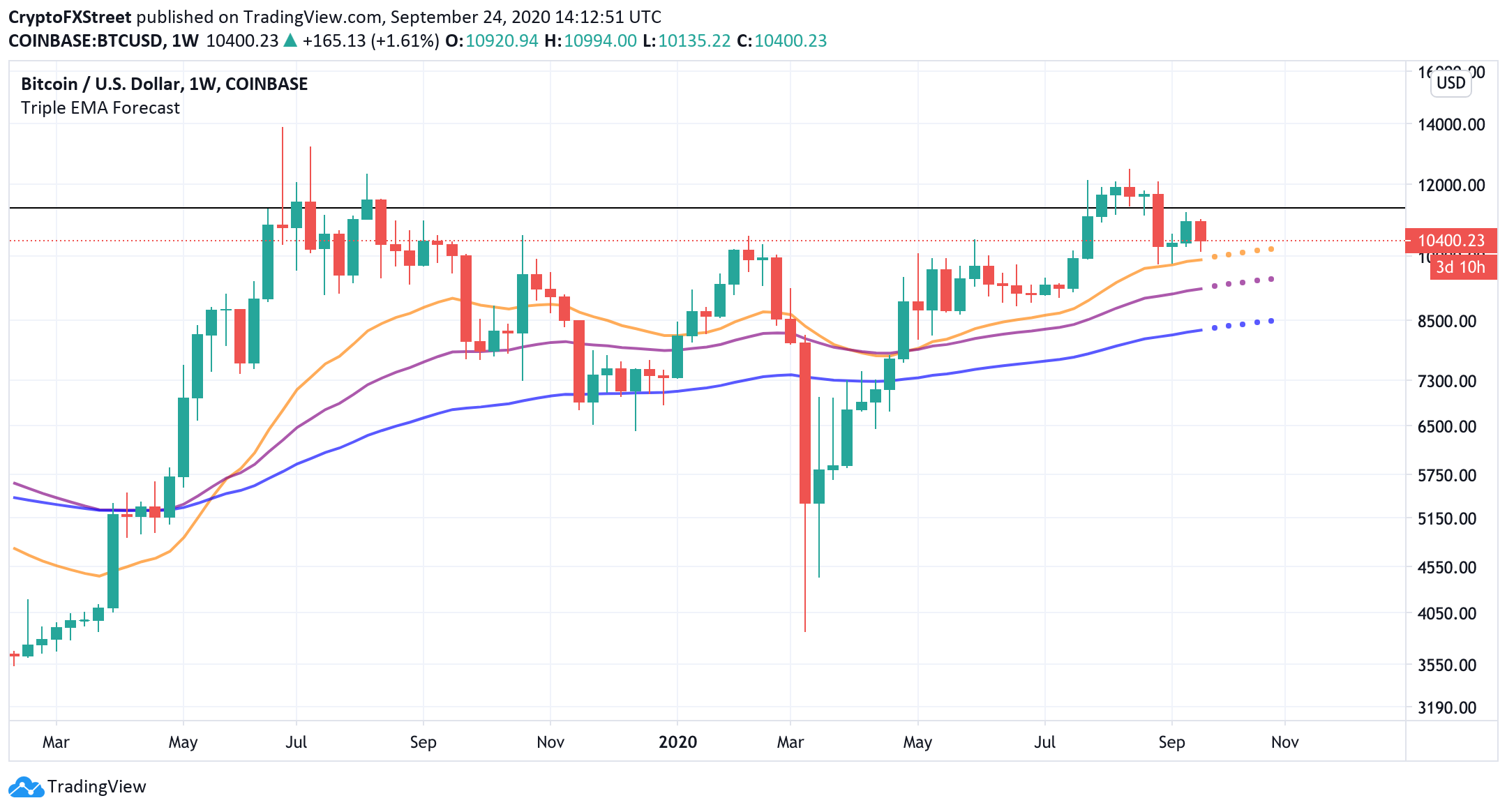 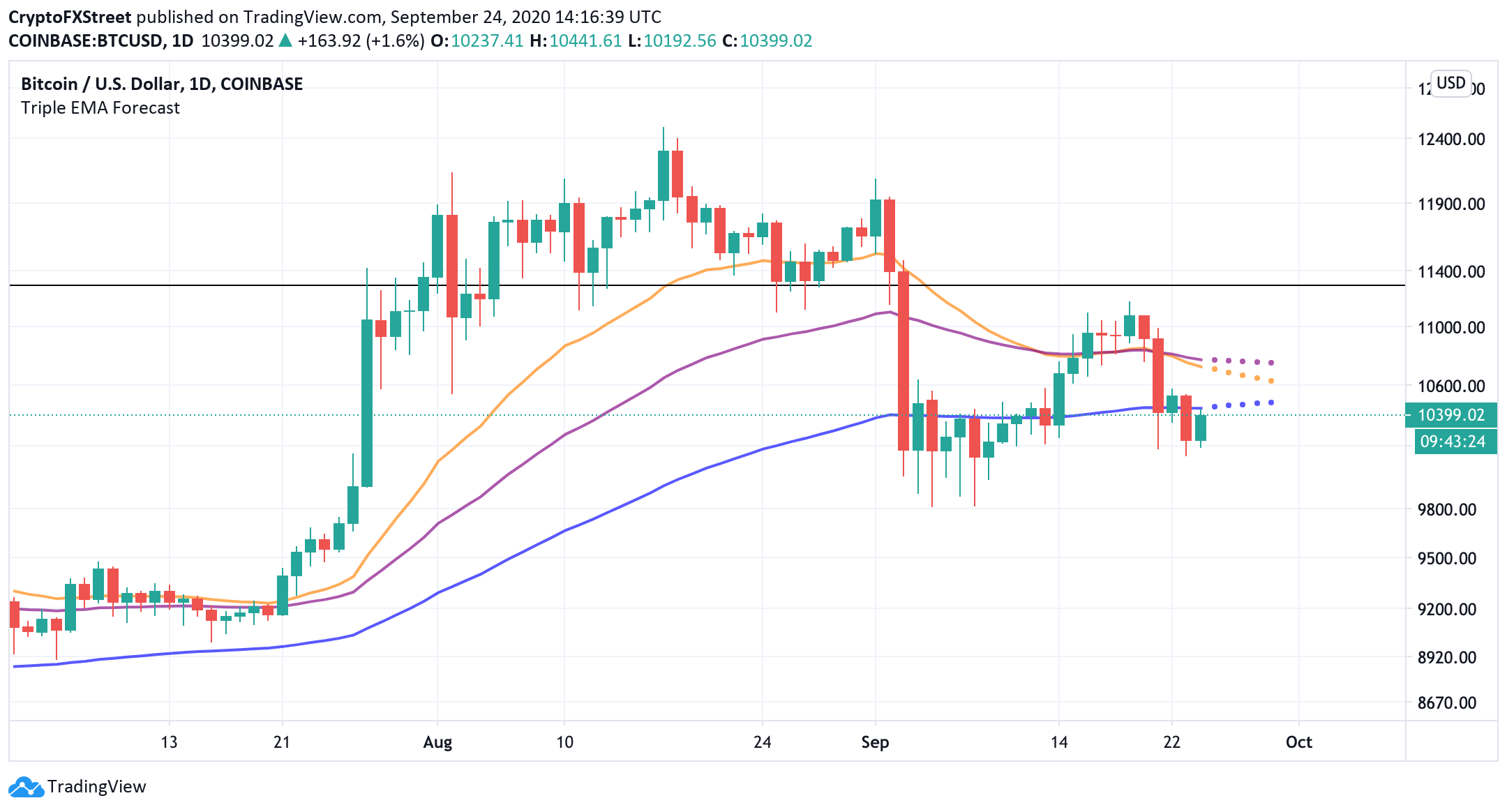 IntoTheBlock’s “In/Out of the Money Around Price” (IOMAP) model reveals there is a big supply above the current price that may prevent BTC from achieving its upside potential. Based on this on-chain metric, the area between $10,400 and $10,700 is filled by many investors who had previously purchased BTC around this price level. Here, roughly 1 million addresses are holding nearly 827,000 BTC.

This area may have the ability to weaken the buying pressure seen recently. Holders who have been out of the money may try to break even on their positions, slowing down the recovery. But if Bitcoin moves through this hurdle, it would likely climb to $11,000, followed by $11,500.

On the flip side, the IOMAP cohorts show that BTC sits on top of significant support. Nearly 1.7 million addresses bought roughly 800k BTC between $10,400 and $10,000. This crucial area of interest suggests that bears will have a hard time pushing prices down.

To conclude: Bitcoin may be vulnerable to the selling pressure in the short-term. The coin is influenced by the traditional markets’ sentiments and the upcoming presidential elections in the US. However, long-term perspectives remain bullish.

USD/MXN jumps to seven-week highs at 22.70 ahead of Banxico

The creation of the COVID-19 vaccine is unlikely to have a strong negative effect on BTC. The cryptocurrency may continue going down amid global uncertainties. Over a week ago, the author of Rich dad, poor dad, Robert Kiyosaki, said that Bitcoin would crash when a COVID 19 vaccine would be approved. Many people caught up the narrative, based on the assumption that Bitcoin is used as a safe-have asst and would go don once the market sentiments improve.  The vaccine will give a glimmer of hope that the second wave can be mitigated, and new full-scale lockdowns won't ruin the…