The growing level of interest in Bitcoin from high net worth individuals have become too significant to neglect. Although the pioneer cryptocurrency is at nascent stages, more investors are buying into the store of value narrative.

US dollar’s woes are only beginning

The question about the need for the US dollar as a reserve currency has been on the minds of many thought leaders in the traditional financial space. The CEO of BlackRock, Larry Fink, believes that a decentralized digital currency poses a threat to the global financial system.

While Bitcoin continues to rise in value, some of the most prominent sovereign currencies are losing their purchasing power. For instance, goods or services that were priced at $1 in 1700 would go for about $53 today. 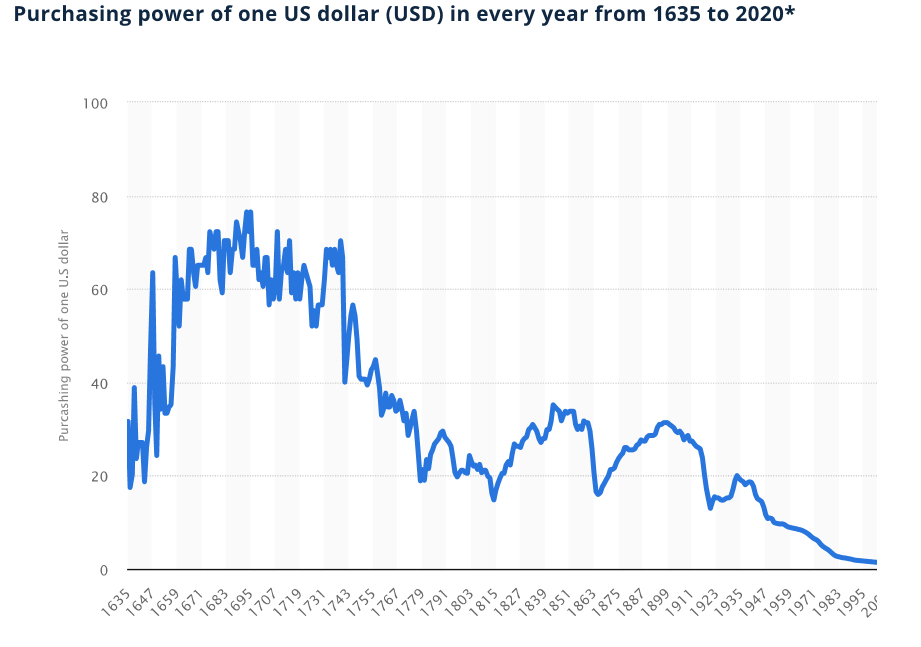 The purchasing power of the US Dollar

Fink’s endorsement adds to the expanding list of billionaires like Stanley Druckenmiller and Paul Tudor Jones, who have made bets on Bitcoin’s success as they see it as a hedge against inflation.

Bitcoin thrives during times of uncertainty

The current economic structure as it is known might be on the brink of extinction. The growing interest in the blockchain industry is making banks as well as paper notes obsolete. There is no longer a need for a global reserve currency as digital assets, such as Bitcoin, enter the monetary system.

Governments have begun to discuss ways to digitize fiat currencies in a desperate effort to retain their relevance in the financial markets.

Speaking at the council of foreign relations, the former governor at the Bank of England, Mark Carney, acknowledged the shortfall of fiat compared to digital currencies.

“One of the accelerants of Covid and the experience of a big shift towards has been to reinforce the importance of the innovations that have happened and further innovations in the payment side. At the heart of that will be a move towards central bank digital currencies,” said Carney.

Monetary sanctions like the ones imposed on the Chief Executive of Hong Kong, Carrie Lam, make a case for the need for a decentralized digital currency. Lam affirmed that the US had cut her off from the global banking system, forcing her to keep “piles of cash.”

In the meantime, Bitcoin has not only gained a substantial amount of value against the US dollar, but it has also outperformed every other asset in the traditional financial markets, including gold. If this trend continues, some of the industry’s most famous technical analysts maintain that BTC could go as high as $300,000 in the coming years.

The traditional financial system is at the brink of extinction as more billionaires around the world add Bitcoin to their portfolios. The cryptocurrency market continues booming as trust erodes for the world's reserve currency. The growing level of interest in Bitcoin from high net worth individuals have become too significant to neglect. Although the pioneer cryptocurrency is at nascent stages, more investors are buying into the store of value narrative. US dollar's woes are only beginning The question about the need for the US dollar as a reserve currency has been on the minds of many thought leaders in the…