Bitcoin (BTC) tested the intraday high of $11,730 and retreated to $11,450 by the time of writing. The pioneer digital currency stayed mostly unchanged on a day-to-day basis and gained nearly 7% in the last seven days. The price broke free from the tight range on Thursday, October 8, and managed to extend the recovery during the weekend, bringing hope for a new bullish wave ahead.

BTC/USD has gained over 7% since the beginning of the month, and the experts from the cryptocurrency exchange Kraken believe that it has more room to go in October.

According to the September Bitcoin Volatility Report, October usually brings more volatility to the cryptocurrency market and wake up sleeping bulls. October has been profitable in five months out of nine, with an average profitability of 11%. If the history repeats, BTC/USD will start November at around 12,000.

If the past is any indication of the future, one should brace for Oct. to outperform September, just as it has for 8 of the past nine years, and return around +11%. Do note that relative to the average monthly return, bitcoin has underperformed 6 of the past nine months.

The flagship cryptocurrency retains a negative correlation with the U.S. Dollar. The FED’s zero interest rate policy fuels inflation fears and concerns over economic growth. As the central bank declared that the rates would stay close to zero at least until 2023, many investors turned to Bitcoin as an alternative safe-haven.

As the FXStreet previously reported, the printing money habits of the global governments destabilize the existing financial and monetary system and force people to seek alternatives to the U.S. Dollar as a reserve currency. Bitcoin may satisfy the requirements due to its limited supply and decentralized nature.

Should market participants further shy away from owning the U.S. dollar, bitcoin and other foreign currencies could stand to benefit as they did in 2Q and 3Q2020.

Meanwhile. Bitcoin’s correlation with the S&P 500 stays elevated. It means that BTC tends to move in lockstep with the stock index and act as a risk asset. However, the correlation with gold also increased in September, meaning that BTC is driven by its anti-inflation features.

Whales are returning to Bitcoin

One hundred whales with over 1,000 coins in their wallets left the network in September. The population shrank to 2075 on October 11 and jumped to 2081 on October 12, hinting that the smart money may be flowing back in.

The number of whales with over 10,000 coins is also recovering amid the BTC price increase. Apart from that, Kraken analysts note that the number of coins held in whales’ wallets increased. Now about 28% of all coins in circulation sit in the wallets from 1,000-10,000 cohort.

The ever-growing number of addresses and coins held in said addresses indicates that new and existing whales have yet to take their foot off the break and cease what has been a 7-month accumulation spree. Both trends seem to suggest that the “smart money” demand remains alive & well.

On a weekly chart, BTC/USD rebounded from the channel support of 10,000. Now the price is moving towards the channel resistance at $12,000. A sustainable move above this area will signal that the bullish trend is resumed with the next focus on  13,000 and $13,800 (the highest level of 2019). 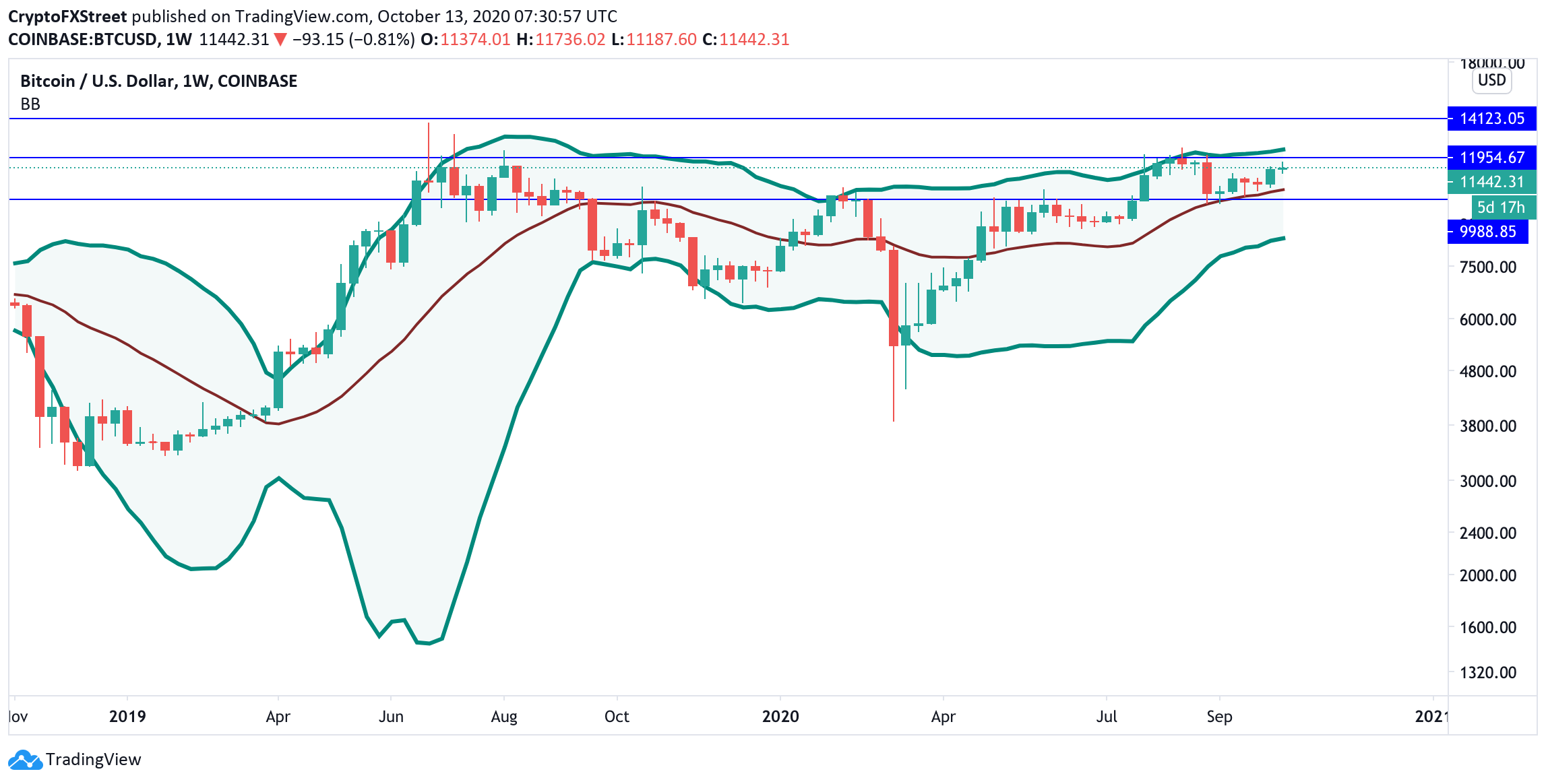 However, this resistance is reinforced by the upper line of the weekly Bollinger Band. Also, considering numerous unsuccessful attempts to clear this area, BTC is vulnerable to the retreat inside the range if the upside momentum is not strong enough to ensure a sustainable breakthrough.

In this case, BTC/USD will return to the local support of $11,000. The ultimate barrier is created by the above-mentioned channel support of $10,000 with the middle line of the B.B. located on approach.

BTC is set to recover from weak September amid increasing volatility. The growing number of whales may trigger a sustainable rally into the end of the year. Bitcoin (BTC) tested the intraday high of $11,730 and retreated to $11,450 by the time of writing. The pioneer digital currency stayed mostly unchanged on a day-to-day basis and gained nearly 7% in the last seven days. The price broke free from the tight range on Thursday, October 8, and managed to extend the recovery during the weekend, bringing hope for a new bullish wave ahead. BTC/USD has gained over 7% since the…