Looking at the daily chart, Bitcoin price is poised for more upward action. The RSI has made a comeback into the overbought region. A continued upward motion could spur more growth towards $9,500 resistance. Consequently, the 50 SMA is narrowing the gap between 200 SMA as a show of strength from the bulls. As long as Bitcoin stays above $9,200 before halving, the potential for gains above $10,000 will remain massive.

Resistance three: $10,087.75 – Highlighted by the pivot point one-month resistance one. 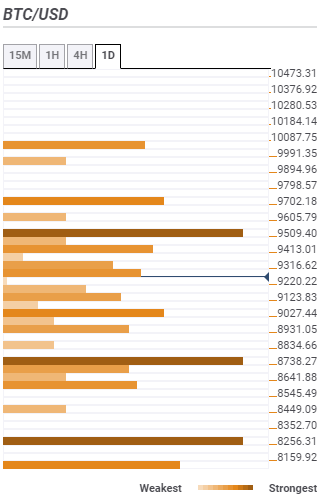 Bitcoin price breakout towards $9,400 hits a wall at $9,382. A pre-halving rally seems possible especially with bullish interest growing in the market. Bitcoin price has extended the action above $9,200 to an extent of touching $9,382 (intraday high). Following the brief surge on Thursday, BTC/USD is dancing at $9,276 from the opening value of $9,158 and representing a 1.27% growth in value. The rest of the cryptocurrency market is in the green according to the cryptocurrencies live rates table. For instance, Ethereum is up 2.64% to trade at $204, Ripple price up 1.38% and exchanging hands at $0.2148 and…