Bitcoin (BTC) jumped above $11,000 at the end of the previous week and stopped within a whisker of a local resistance created by $11,500. At the time of writing, BTC/USD is changing hands at $11,350, mostly unchanged both on a day-to-day basis and since the beginning of Monday. The pioneer digital currency gained over 6% in the last seven days. However, it is still below the 2020 high.

Bitcoin’s market capitalization has increased to $2210 billion, 58.4% from the total value of all digital assets in circulation.

A sustainable move above $11,000 has improved BTC perspectives and offered hope that the coin is ready to realize its bullish potential. From the fundamental point of view, at least three factors imply that the flagship cryptocurrency is well-positioned for a further trip to the North.

The U.S. currency used to be the vital financial safe-haven in times of market and geopolitical turbulence. However, times change slowly but surely. Overaccomodative monetary policy and the FED’s attempts to print its way out of the economic crisis have been eroding people’s confidence in the U.S. Dollar as a reserve currency.

Dollar Index hit the recovery high at 94.11 on September 24 and resumed the decline. At the time of writing, DXY sits at 93.00. Once this psychological barrier is out of the way, the index may retest the low of 91.75 reached on September 1, which is also the lowest level since April 2018.

According to Goldman Strategists, the U.S. Dollar will continue moving down on the expectations of Joe Biden winning the U.S. election.

The risks are skewed toward dollar weakness, and we see relatively low odds of the most dollar-positive outcome — a win by Mr. Trump combined with a meaningful vaccine delay, they wrote in a note Friday.

The massive dollar devaluation comes hand in hand with the inflation threat and brings Bitcoin (BTC) to the fore as a store of value and a hedge against inflation. A limited supply brings BTC on par with gold as a store of value, while its decentralized nature protects it from manipulations and abuse.

2. Regulatory clarity is a welcome thing

The regulatory clean-up launched by the authorities worldwide is actually a good thing for the industry as it makes it more mature and suitable for mass adoption.

The vast majority of cryptocurrency experts accept this truth and emphasize that the restrictions are necessary in the long run. They help reduce fraudulent activity within the space and protect the customers. Moreover, the market reaction to the news confirms the idea that the regulators are no longer regarded as an evil force.

According to the report published by Fundstrat Global Advisors LLC, this trend will harm individual companies and people, but Bitcoin’s trend will stay unaffected.

Actions unsurprisingly indicate U.S. and global regulators are committed to stomping out an illicit activity, securities violations, money laundering, price manipulation, and noncompliance with banking regulations. On balance, we view recent news as a positive for crypto markets, despite select smaller pockets of risk, and we believe the prevailing bull market trend is intact.

The regulatory scandal around the trading platform for cryptocurrency derivatives is dying out. Vivien Khoo, a new Interim CEO, has ties with CME and other regulatory structures worldwide. Arthur Hayes and Samuel Reed resigned from their top positions, while the latter was released on bail right after the resignation.

While the development is bad for BitMEX founders as they are effectively kicked out of business, the cryptocurrency market will benefit as the exchange will stay afloat and continue business as usual.

Basically, this is just another example of how the industry integrates with the existing regulatory and legal frameworks.

Meanwhile, the technical picture may be a bit less optimistic, at least in the short run. T.D. Sequential indicator hints that the price may be ready for a downside correction both on 12=hour and daily chart, while a failure to close above $11,500 within the nearest sessions will signal that the bullish momentum is fading away. 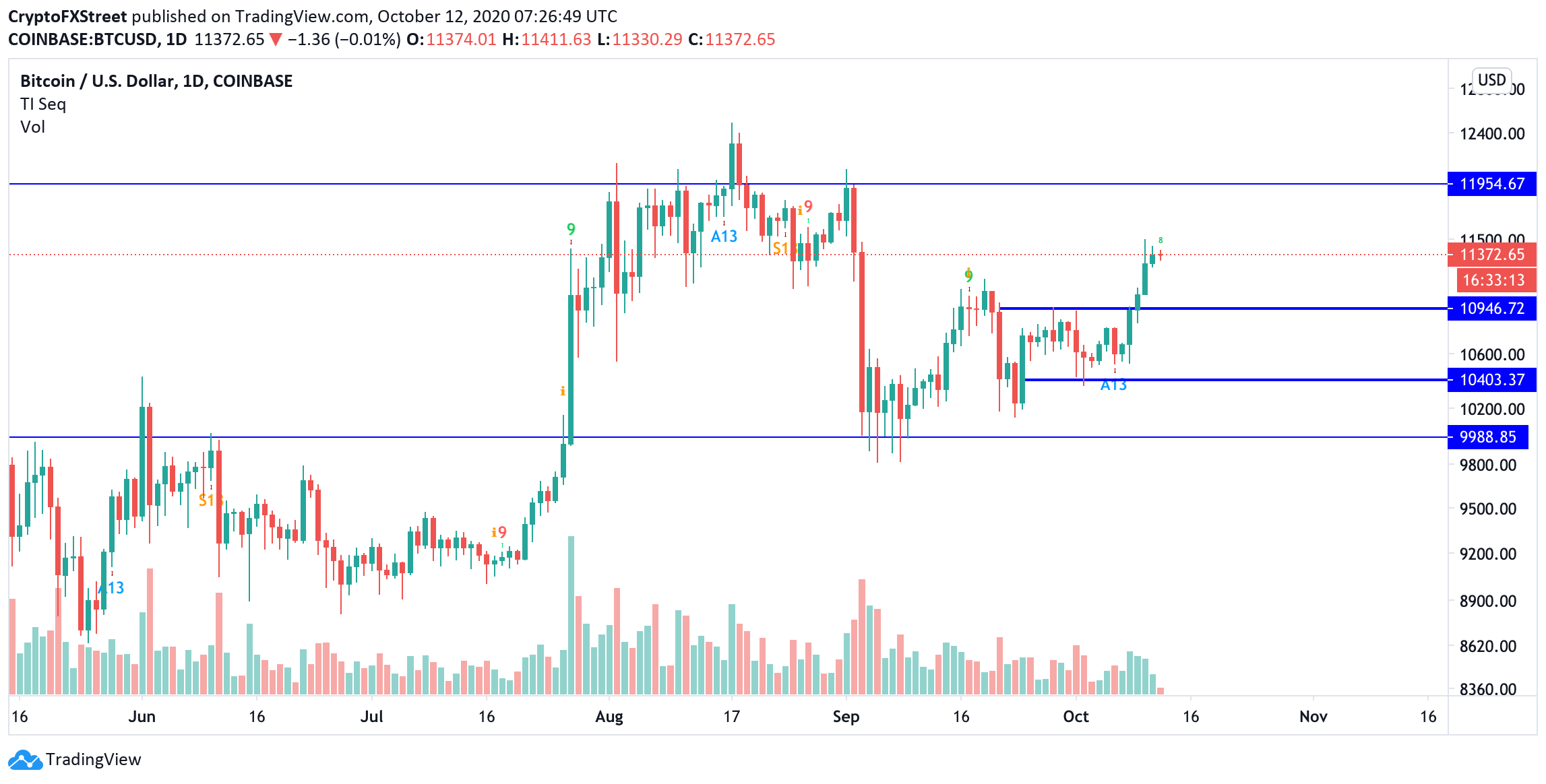 If the signal is confirmed, the price may retreat to $11,00o that served as a strong resistance since the beginning of October. This area is likely to slow down the sell-off and trigger a new recovery wave.

On the other hand, a sustainable move above $11,500 will confirm that the bullish trend has resumed and push the price towards the initial target of $12,000.

The on-chain data confirms that there is a strong barrier located at $11,000. Over 1.5 million addresses containing 1 million BTC are likely to protect their breakeven and absorb the downside pressure. If it is broken, the sell-off may continue towards $10,400.

On the upside, we have 1 million addresses with over 600,000 BTC sitting around the above-mentioned resistance of $11,500 with very little in terms of resistance above this level.

To conclude: the fundamental environment is positive for Bitcoin’s growth; however, the coin may retreat to $11,000 before the growth is resumed. From the technical point of view, the upside is considered as a path of least resistance. A sustainable move above $11,500 will confirm the bullish trend.

On the other hand, strong support comes at $11,000. The move below this area will negate the immediate bullish scenario and push the price towards $10,400.

USD/CAD Price Analysis: Recaptures 21-HMA on the road to recovery from monthly lows

Dollar devaluation brings attention to BTC as a store of value. Regulatory attention paves the way to Bitcoin's mass adoption. Technical correction may push BTC to $11,000 before the growth is resumed. Bitcoin (BTC) jumped above $11,000 at the end of the previous week and stopped within a whisker of a local resistance created by $11,500. At the time of writing, BTC/USD is changing hands at $11,350, mostly unchanged both on a day-to-day basis and since the beginning of Monday. The pioneer digital currency gained over 6% in the last seven days. However, it is still below the 2020 high.…