The cryptocurrency market experienced a flash crash on Tuesday wiping out $400 billion off the market and the Bitcoin price trading down 14% at $45,487 according to crypto-data website CoinMarketCap. The crypto bloodbath was triggered by a rocky start to the first day of  Bitcoin as a legal tender in El Salvador. The price of nearly every single coin in the top 100 plummeted following the sell-off.

Bitcoin led the market value losses as it dipped 17% to reach a three-week low below $43,000 before quickly overturning some of the losses to settle at $45,487 at the time of writing, still 14% lower than 24 hours ago.

Yesterday  September 07 was ‘Bitcoin Day’ in El Salvador when the flagship was declared legal tender El Salvador. This was marked by difficulties in the country’s Chivo wallet which, as the Preside Bukele had said, became available on the day the Bitcoin Law was effected.

There was a slight delay when users tried to download the Chivo Wallet in order to receive the $30 offered by the government of the Latin American country. This forced the Chivo wallet to be halted temporarily as the team moved the application to servers with higher capacity.

These difficulties triggered a sell-off in the cryptocurrency marker with Bitcoin declining from above $51,000 down to below $43,000. President Bukele took advantage of this sell-off and bought the dip adding 150 BTC increasing the total amount in reserve from 400 to 550 BTC.

On a light note but to be taken seriously, Bukele took a jab at the International Monetary Fund (IMF) by thanking them for the dip. In a tweet, President Bukele said that the country now holds 550 Bitcoins and saved a million in printed paper. 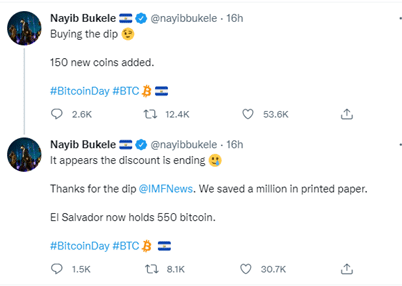 The IMF has criticised El Salvador adopting Bitcoin as legal tender saying that it is “dangerous” and the World Bank refused to help the country with its adoption process. Rating’s agency Moody’s has also downgraded the country’s debt, citing the risks associated with using bitcoin as legal tender. All this criticism has encouraged president Bekele to stand his ground against the people who didn’t care about the El Salvador in the first place.

BTC/USD price shed approximately $7,000 of its market value during yesterday’s crypto flash crash as the Bitcoin became legal tender in El Salvador. Bitcoin tanked below $43,000 but quickly recovered to close the day at $46,811.13.

A look at the four-hour chart shows that during the crash, BTC price flipped the $50,000 resistance level, the 50 period Simple Moving Average (SMA), 100 SMA and the 200 SMA from support to resistance.

Bitcoin is currently battling a major obstacle around the $46,500 resistance level. If the Bitcoin price does nit close the session above this level, it may fall further to rag the immediate support zone at $43,800.

Several technical indicators validate this bearish outlook. For example, the Relative strength Index (RSI) is currently oversold at 24.68 indicating that the bears are in control of Bitcoin. Moreover, the down-sloping moving averages which are currently acting as resistance and the negative parabolic SAR add credence to this bearish bias.

Moreover, the sharp downward movement of the Moving Average Convergence Divergence (MACD) indicator as it crosses the mid-line into the negative movement shows that the BTC market momentum is bearish. Also note that the MCD indicator sent a call to sell crypto signal when the 12-day Exponential Moving Average (EMA) crossed below the 26-day EMA triggering massive sell orders. As such, the short-term Bitcoin price prediction is bearish even as bulls struggle to undo yesterday’s losses.

On the flipside, a decisive bullish breakout will be realised if Bitcoin closes above the 200 SMA at $47,500 and a record of higher highs and higher lows could see BTC recover over the next sessions. Bitcoin would need support from the wider market to increase the buying pressure targeting the 100 SMA at $48,950.

It is worth noting that the RSI is massively oversold following the crash suggesting that a trend reversal in the Bitcoin price could be seen soon as selling pressure eases off.

Where to Buy BTC Cheap Now

If you want to trade Bitcoin, you can do so on eToro. eToro is one of the most trusted exchange platforms in the crypto space. eToro supports copy trading, which allows new traders to learn from market experts. eToro also charges low trading fees and commissions.

Tuesday’s cryptocurrency flash crash wiped approximately $400 billion off the market. El Salvador took advantage of the Bitcoin price crash to increase it's coin reserve. Technical difficulties with the Chivo wallet, El Salvador's Bitcoin wallet, led to delays with the rollout triggering the sell-off. Bitcoin shed $7,000 to trade below $43,000 for the first time in three week during the crash. The cryptocurrency market experienced a flash crash on Tuesday wiping out $400 billion off the market and the Bitcoin price trading down 14% at $45,487 according to crypto-data website CoinMarketCap. The crypto bloodbath was triggered by a rocky start…