Bitcoin is highly unlikely to drop below $6.7K – Analyst PlanB

Quant analyst PlanB recently took to Twitter to say that Bitcoin is highly unlikely to drop below $6,700. The analyst referenced the 200-week moving average (200MA) for BTC/USD to come to this conclusion. The 200MA has never been broken during Bitcoin price downtrends.

As long as historic behavior continues as it has done so far, $6,700 will now form a definitive price floor.

PlanB added that in March 2017, Bitcoin found it challenging to clear the vital $1,000 mark. However, after succeeding, the all-time highs of $20,000 arrived by the end of the year. After publishing the 200MA update, PlanB posted an online survey about future BTC price action. The survey attracted 14,000 responses.

The majority (59.2%) is bullish about Bitcoin over the next year. They also favor BTC over other cryptocurrencies. In total, over 92% of respondents are bullish when it comes to BTC/USD.

BTC pioneer says the coin is inversely correlated to the USD, not the stock market

Keiser is not the only one who shares this opinion. Many Bitcoiners pointed to March 12 (Black Thursday) when digital assets crashed by nearly 40%. While global markets were also in the red, Bitcoin recovered and grew faster than stocks.

Markets.bitcoin.com data shows that BTC nearly doubled in value between March and September 2020. On March 21, Bitcoin traded at $5,792. On September 21, the leading digital asset sold at $10,499.

In comparison, the Dow Jones Industrial Average (DJIA) closed March 20 at 19,173 points. DJIA is the benchmark index in the US for blue-chip stocks. The same index closed September 21 at 27,147 points, representing a growth of 41.5% from March.

This data has convinced some Bitcoiners that the coin has an inverse relationship with fiat currencies such as the USD. 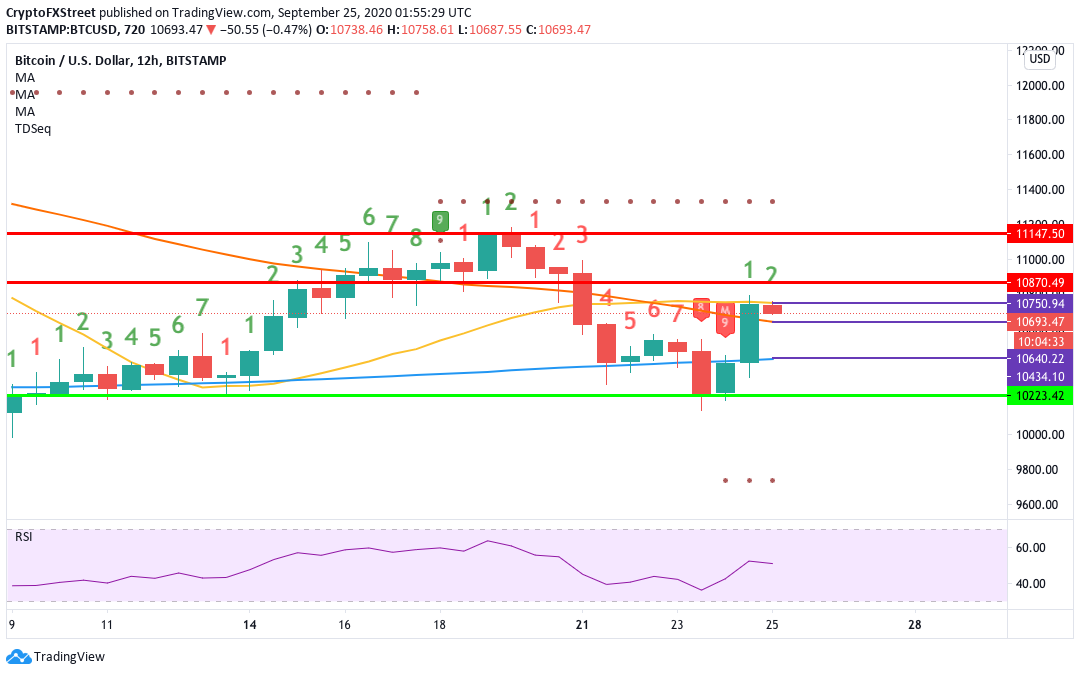 In the 12-hour chart, BTC/USD has dropped from $10,744 to $10,695 following two straight bullish sessions wherein the price bounced up from the $10,223.42 support line and breaking above the SMA 200 and SMA 50 curves. Currently, the price has met resistance at the SMA 20 and dropped down. The buyers will need to protect the support at the SMA 50 curve to prevent further downtrend.

Sentiment’s “age consumed” is a useful metric that can help us predict any sharp price movement. As you can clearly see, there was a spike this Thursday where age consumed jumped up to 2.3M, which triggered an uptrend. 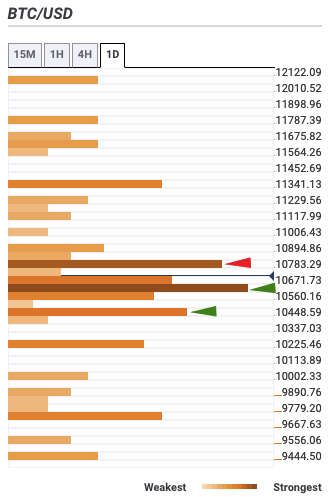 The daily confluence detector is a helpful tool that helps us predict the price movement of BTC. As per the tool, the premier cryptocurrency faces strong resistance at $10,800. This level has the one-hour Previous High.

On the downside, there are two healthy support levels at $10,600 – with the Previous Month low – and $10,500. These two support levels have enough juice to counter selling pressure. However, if the buyers break above the $10,800-level, the price should be able to cross the $11,000-level.