Grayscale buys yet another $180M worth Bitcoin

Grayscale appears to have control over nearly 2.5% of the Bitcoin supply. Grayscale is not the only company that has bought a large portion of Bitcoin. According to an earlier FXStreet report, MicroStrategy purchased an additional 16,796 BTC ($175 million) a few days back.

Barry Silbert, the CEO of Grayscale, took to Twitter to say that there’s an ongoing “race” between the two firms.

Grayscale has reported $5.8 billion worth assets under management. These assets include Ethereum, Bitcoin Cash and Ethereum Classic, among many others.

This sort of institutional attention is highly bullish for Bitcoin.

Age consumed tracks the movement of previously idle BTC tokens. The metric shows the amount of BTC changing addresses daily multiplied by the number of days since they last moved. Spikes indicate a significant amount of previously idle BTC tokens moving between addresses. A spike usually preceded wild price movements. There was a wild spike on 17.44 million in the three-month period, following which the price went up. Recently, there was a spike of 9.68 million this Tuesday, which will trigger a sharp movement.

Let’s look at the daily confluence detector to see where the price is going to go. 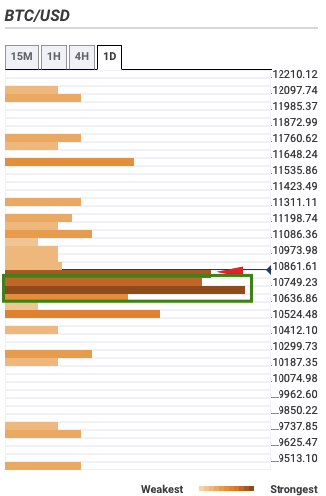 As per IntoTheBlock, the number of new addresses entering the protocol rose from 455.6k to 539.45k over the last two days. This is s bullish sign for the network since it shows that it is organically growing. However, it should be noted that the number of new addresses entering has been pretty much consistent over the last month.

US Dollar Index Price Analysis: DXY bounces off one week low after US presidential debate

Grayscale investment firm has bought 17,100 Bitcoin in the past week.  BTC faces a strong resistance level at $10,800, as per the daily confluence detector. Grayscale buys yet another $180M worth Bitcoin  Investment management firm Grayscale has recently resumed its acquisition of Bitcoin. The firm has increased its assets under management (AUM) by over 17,100 Bitcoin ($180 million) in the past week. The total digital assets under management have now surged to 449,900 (a whopping $5 billion).  Grayscale appears to have control over nearly 2.5% of the Bitcoin supply. Grayscale is not the only company that has bought a large…