Whale Alert notifies a movement of 29,293 BTC between exchanges and anon wallets

The Whale Alert twitter account has recently disclosed many wires carrying a whopping 29,293 BTC (nearly $208,000,000). These transfers were made between OKEx exchange, Binance and three anonymous wallets.

9,888 BTC ($101 million) were transferred from the OKEx exchange to Binance over three transactions. The remaining three wires carried 10,405 BTC from Binance to three anonymous wallets.

Some experts are speculating that whales moved their BTC holdings from Binance after the coin’s price dropped recently. Meanwhile, Binance recently shed light on a massive rise in trading volume figures on Binance Futures. According to a blog post, the transacted amount was a whopping $1 trillion year-to-date.

In a recent newsletter, Bloomberg analyst Mike McGlone said that Bitcoin is below the price level it should be at. McGlone believes BTC should be priced close to $15,000 due to the surge in hashrate and active addresses.

The Bitcoin hash rate continues to increase and recently reached new highs. Also advancing are addresses used. A top metric for adoption, the 30-day average of Bitcoin addresses, is equivalent to the price closer to $15,000 when measured on an autoscale basis since 2017.

Despite the recent drop in price, McGlone believes BTC’s future is hopeful in trading and investment. He also noted that the coin appears to be the current leader in the future of money and saving. McGlone added that Bitcoin is a significant element in the “paradigm shift toward digital money and stores of value.” BTC’s likely fall in the future is not a long-term issue due to its hashrate and active addresses, he added.

In addition to these factors, there appears to be a positive sentiment surrounding the flagship coin. If Bloomberg is right, Bitcoin could soon rise to $15,000.

Venezuelan authorities have introduced a mandate that regulates all cryptocurrency activities, including mining. The mandate has legalized mining. However, it requires interested people to first get a license from Venezuela’s National Superintendency of Crypto Assets and Related Activities (SUNACRIP).

The country plans to create a Comprehensive Registry of Miners to keep records of this information. Individual miners should describe their activity, their equipment and other related information. Large mining farms and ASIC operators must obtain special licenses.

Venezuela will also form a National Digital Mining Pool to unite all Venezuelan miners and allow profit-sharing. This protocol appears to be mandatory yet minimally enforced. SUNACRIP will offer incentives for those who join the pool and charge penalties on those who do not.

The new mandate has raised some concerns in the cryptocurrency community. A central authority will control BTC mining in Venezuela, undermining the Bitcoin community’s collective goal of complete decentralization.

Mining-related issues have come up in Venezuela before. According to a CryptoBriefing report, Venezuelan BTC miners have been fined and arrested for mining in the past. There have also been incidents where the government has seized Bitcoin mining equipment from individuals.

The bulls took back control following this Friday’s bearish correction, as the price went up from $10,691.35 to $10,698.20. The price is currently consolidating inside the ascending triangle formation. The buyers must attempt to break past the downward trending line to break above the triangle. The MACD shows sustained bullish momentum.

Santiment’s age consumed metric helps us predict any sharp movements in price. There was a spike on this Friday, wherein age consumed reached 2.12M. Following that, the price went up from $10,657.40 to $10,747.55, following which it went down. 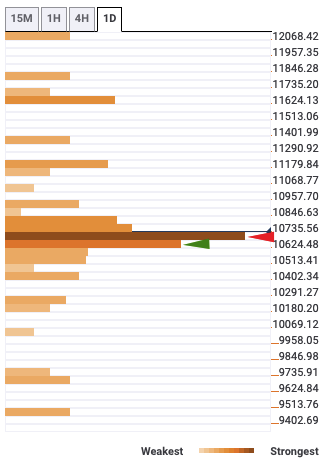 So, it looks like BTC will be crawling along horizontally unless the buyers or the sellers take the price by the scruff of the neck.

Around $208 million worth BTC has been shifted between OKEx, Binance and three anonymous wallets. Bloomberg analyst Mike McGlone said that BTC should be performing at a much higher price.  Whale Alert notifies a movement of 29,293 BTC between exchanges and anon wallets The Whale Alert twitter account has recently disclosed many wires carrying a whopping 29,293 BTC (nearly $208,000,000). These transfers were made between OKEx exchange, Binance and three anonymous wallets.  9,888 BTC ($101 million) were transferred from the OKEx exchange to Binance over three transactions. The remaining three wires carried 10,405 BTC from Binance to three anonymous wallets. …