The rapid ascent of Bitcoin price above $35,000 due to Elon Musk’s involvement would have been bullish if the price stayed there. However, BTC is currently trading at $33,600 and hinting at a pullback. The bearish thesis is supported by several on-chain indicators and the upcoming Chinese New Year, which tends to lead to a brief correction based on historical data.

Bitcoin price might have topped out, suggests Peter Brandt

Peter Brandt, a well-known and respected trader, suggested that Bitcoin might have hit a market top. The trading veteran considered BTC price data from December 2017 to January 2018 and compared it to the price action seen over the past two months. 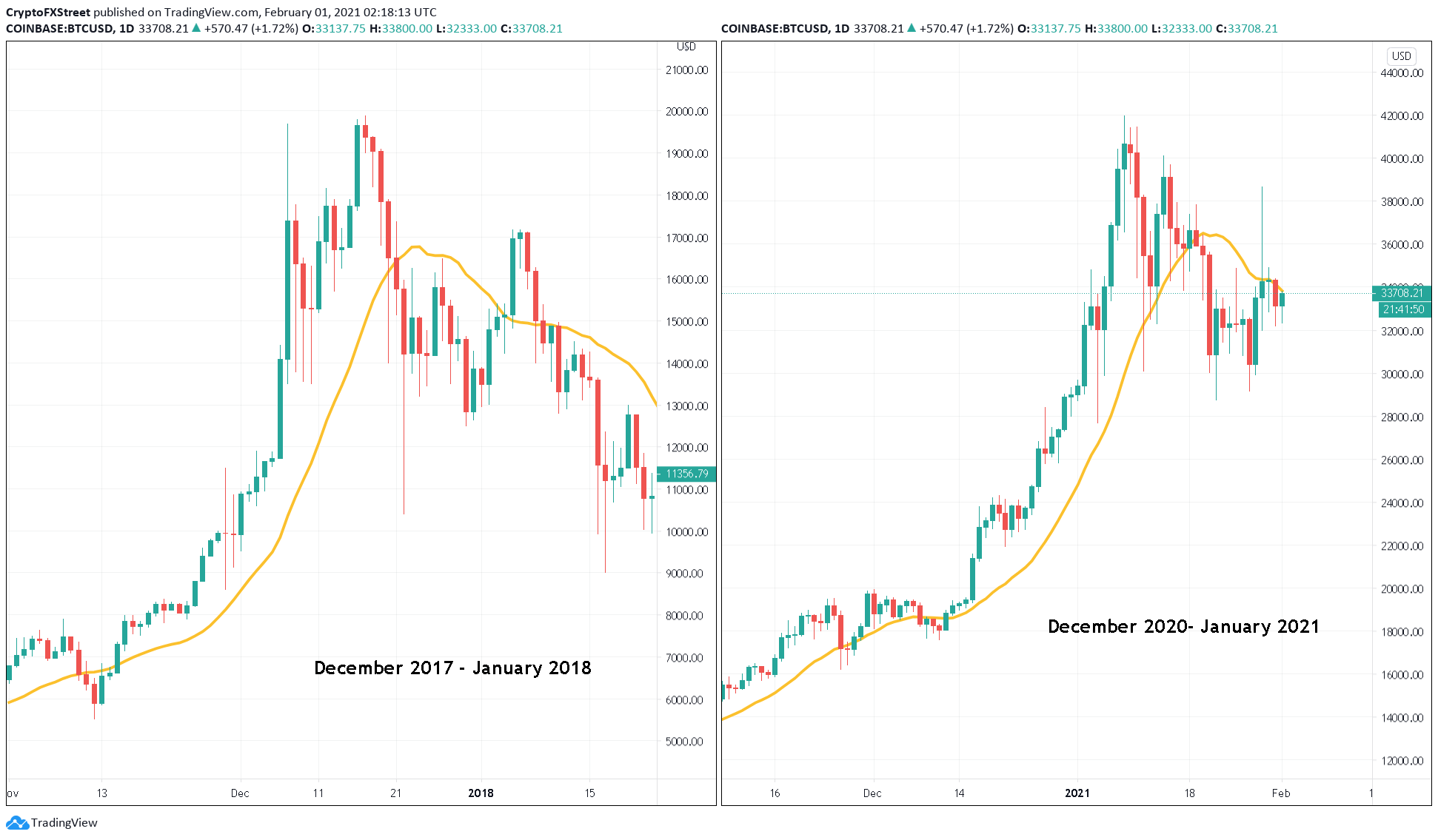 Although the chart above is just an observation from Brandt, on-chain indicators concur that a pullback might be around the corner.
Santiment’s Bitcoin Holder Distribution metric shows that whales with 10,000 BTC to 100,000 BTC are selling or redistributing their tokens. Such market behavior indicates that prices could head lower in the near-term future.

Indeed, the number of large whales decreased by 12.5% from November 2020 and 2.97% from January 2021, increasing the downward pressure behind the flagship cryptocurrency.

Interestingly, the Bitcoin price rally hit a top in July 2019 when whales holding 10,000 BTC to 100,000 BTC decreased by 12.82%. At press time, this drop is eerily similar and falls in line with the market top idea suggested by Peter Brandt.

IntoTheBlock’s In and Out of the Money Around Price (IOMAP) suggests Bitcoin price faces a critical area of supply around the $35,000 level where 700,000 addresses have previously purchased 415,000 BTC. Since holders within this price range are currently underwater, a price surge might be stunted as they will be inclined to sell and break-even.

Adding more credence to the IOMAP chart is Brandt’s view of Bitcoin’s current market structure. Since BTC price is consolidating in a flag/pennant pattern, it should theoretically suggest a bullish breakout. However, Brandt adds,

He further adds that,

“It is NOT my preferred view, but I cannot help but notice the similarities between the current price action and the price action at the Dec 2017-Jan 2018 top.”

Chinese investors are off for holidays

The Chinese New Year is typically met with high volatility in Bitcoin price due to reduced liquidity as most OTC services will be closed. In 2021, the New Year starts on February 12 and can last as long as a week.

Historically, Bitcoin price drops during the holidays range from 8% to more than 15%. Hence, a downswing seems more than likely.

Based on the IOMAP cohorts, $32,000 is a significant support level as 434,000 addresses bought 192,000 BTC around this price level. However, due to mounting bearish pressure, this level could be breached easily, causing cascading short orders. In this case, $22,500 could be the next cushion where 4 million addresses accumulated 3.42 million BTC.

Bitcoin price hints at a pullback as whales continue to dump their holdings. Adding more bearish pressure is the fast-approaching Chinese New Year. Veteran trader Peter Brandt flirts with the idea that BTC reached a market top The rapid ascent of Bitcoin price above $35,000 due to Elon Musk’s involvement would have been bullish if the price stayed there. However, BTC is currently trading at $33,600 and hinting at a pullback. The bearish thesis is supported by several on-chain indicators and the upcoming Chinese New Year, which tends to lead to a brief correction based on historical data. Bitcoin price…