Home » Bitcoin Price Prediction: BTC on the threshold for liftoff to $10,800

Bitcoin Price Prediction: BTC on the threshold for liftoff to $10,800

Bitcoin has been in consolidation for over a week now following initial free-fall from highs above $12,000. The support range between $9,800 and $10,000 turned out to help the bellwether digital asset. Frequent attempts have been made to pull Bitcoin above the range limit resistance at $10,400, but none have been yielding so far. The situation could change altogether if bulls stay on track following the most recent technical breakout. BTC/USD is teetering at $10,378 on Thursday, September 10, 2020.

Bitcoin is popularized as the digital gold, but critics of the bellwether cryptocurrency find such a relationship rather annoying. However, data by CoinMetrics has proven them wrong according to this 60-day BTC correlation to the precious metal. Investors in the traditional stock market can hedge against price falls and tough economic times by converting their assets to Bitcoin, just like they would do with gold. 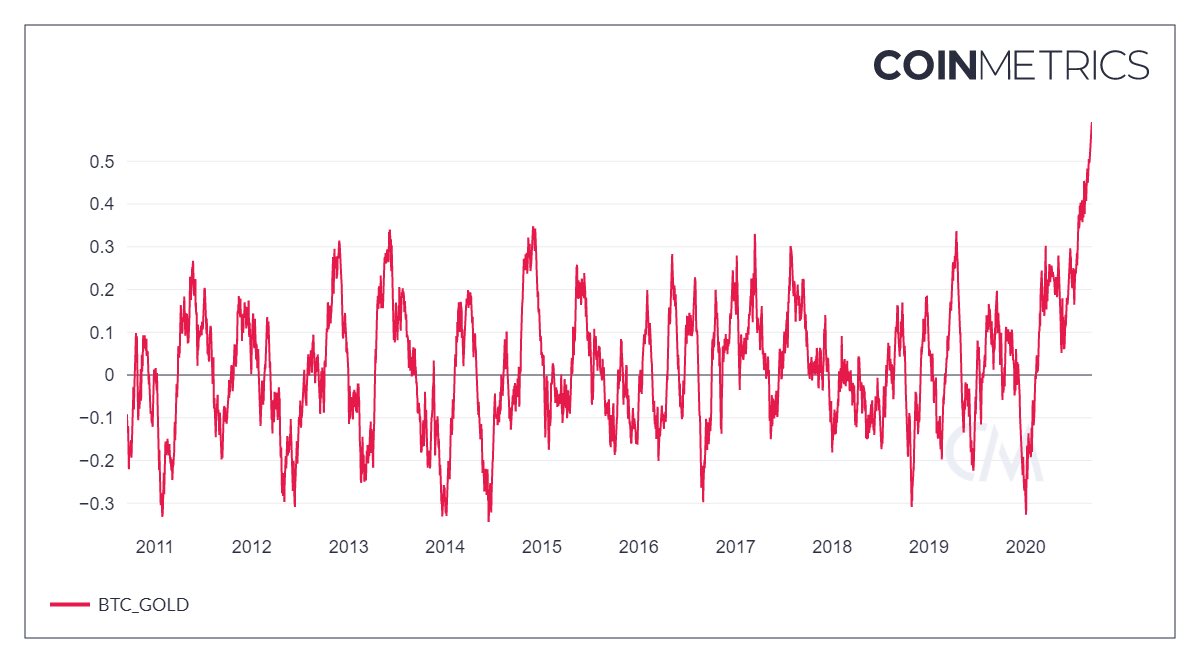 Both Bitcoin and gold have hit new yearly highs in 2020, with BTC rising to $12,500 and gold to $2,000 per ounce. Intriguingly, BTC correlation to the S&P 500 has also grown significantly in the last couple of months. Some analysts like PlanB believe that there is a chance for Bitcoin and S&P 500 to rally side by side.

Now we wait .. until #bitcoin and S&P500 move up TOGETHER pic.twitter.com/J6ltWEQHyi

Bitcoin price is flashing buy signals following an incredible breakout above a key but short descending trendline. However, the biggest test is whether the bulls have what it takes to climb past the medium-term resistance at $10,400 (50 Simple Moving Average in the 4-hour range).

The Relative Strength Index (RSI) reinforced the presence of buying pressure with a spike above the midline. The Moving Average Convergence Divergence (MACD) is closing in on the mean line (0.00) after recovery from a dip to -311. On crossing into the positive region, there is a massive chance BTC would gain traction, bringing down the seller congestion at $10,400 and quickly rallying to $10,800. Other key hurdles to keep in mind include $11,000, the 100 SMA as $11,500.

The daily chart shows that Bitcoin’s resistance at $10,400 gave the bulls a hard time in February and June. Both times, the flagship cryptocurrency did not make it through. Instead, in February, BTC fell into a bottomless pit that only found bearing mid-March at $3,800. In June, Bitcoin retreated slightly but found support at $9,000. Consequently, if Bitcoin is rejected at $10,400, it could spiral to $9,000 or worse, $8,500.

According to the In/Out Money metric by IntoThe Block, the largest cryptocurrency is trading slightly below a relatively more robust resistance zone between $10,369 and $10,670. Note that the volume purchased in this range topped 540,000 BTC. Marginally, below the current market price, Bitcoin is supported at $10,350, with 13,250 BTC of volume. In other words, this support volume is not enough to drastically push BTC above the critical hurdle at $10,400. The most significant support lies at $10,041, while Bitcoin’s primary support calls $9,114 home.

Despite the break above the key descending channel, Bitcoin does not have the muscle to push above the long term resistance at $10,400. Therefore, if a breakout occurs, after all, the rendezvous would be $10,800 before bulls stage another liftoff above $11,000. On the downside, support at $10,350 is not strong enough. If retested, BTC could plunge to the next critical support at $10,040. Bitcoin has not bottomed yet; therefore, there is still room for more downside price action. The primary support, as seen, holds the ground at $9,114.

Bitcoin is knocking profusely on the long term resistance at $10,400 in anticipation of a breakout to $10,800. BTC/USD is not strongly supported at $10,350, raising concerns of a possible $10,040 support breakdown. Bitcoin has been in consolidation for over a week now following initial free-fall from highs above $12,000. The support range between $9,800 and $10,000 turned out to help the bellwether digital asset. Frequent attempts have been made to pull Bitcoin above the range limit resistance at $10,400, but none have been yielding so far. The situation could change altogether if bulls stay on track following the most…