The cryptocurrency market has slowed down the bullish momentum. Last week was as though Bitcoin was on steroids. In addition to sustaining gains above $10,000, BTC rocked above $12,000. The largest cryptocurrency traded a new yearly high at $12,145 before retreating to test and confirm support at $10,400.

Since Monday, the mission has been to recover the lost ground and extend the action started above $12,000. At the moment, Bitcoin is trading at $11,821 after growing by 0.41% on the day. However, the trend remains relatively bearish amid shrinking volatility. This means that it would take a stronger effort to bring down the resistance at $12,000.

The daily chart clearly shows that buyers are in control. The RSI seems to be extending action in the overbought region while the MACD features a small bullish divergence within the positive area. In addition, the 50 SMA continues to maintain the gap above the 200-day SMA. In other words, Bitcoin price is technically healthy and prime for a breakout past $12,000 but it lacks the volume to actualize this move.

Glancing higher, $12,022 stands out as another key zone that must come down for BTC bulls to achieve their desire of trading at new yearly highs. Indicators in this zone include the previous high one-day, the Bollinger Band 15-minutes upper curve, the previous high 4-hour, the Bollinger Band 1-hour upper and the pivot point one day resistance one. Other hurdles to keep in mind include $12,268, $12638 and $13,130.

When it comes to the support levels, Bitcoin will seek refuge initially at $11,776 as highlighted by the SMA ten 4-hour, the previous low 4-hour and the Bollinger Band 15-minutes lower curve. The most important support is seen at $11,530 and is home to the pivot point one-day support two, the SMA 100 1-hour, the previous month high and the previous week high. Other lower support areas include $11,407, $11,037 and $10,914. 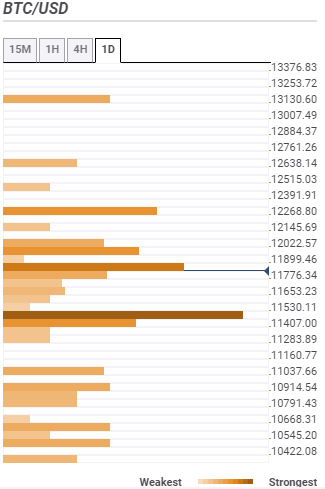