The market is deep in the red, starting with Bitcoin’s 1.92% loss on the day. Altcoins are also trimming the gains accrued from last weekend led by Ethereum Classic’s 5.42% dive, IOTA’s 5.39% decline and Bitcoin Golds 4.67% loss.

Bitcoin is trading at $8,491, although the session Thursday opened at $8,659. BTC has managed to touch a high at $8,663 (intraday). The prevailing trend has a bullish bias amid high volatility levels. In other words, bulls are working extra hard to ensure that a reversal comes their way soon.

Bitcoin is moving towards the much-anticipated halving event, scheduled to take place in May 2020. Halving is a process that cuts mining reward per block mined to half. This means that the following halving, miners will receive 6.25 BTC for every block mined as opposed to the current 12.5 BTC.

Many enthusiasts believe that the event will see the supply of Bitcoin drop significantly. At the same time, demand will either stay the same or even increase. Bitcoin price is, therefore, likely to grow significantly in the months before and after the event mainly due to speculation. Satoshi Flipper, an analyst on Twitter told is over 40,000 followers that he expects Bitcoin to surge to $15,000 in the run-up towards halving.

I’m predicting $BTC to slowly grind to 15k in the run up to the halving. Only 3 months away. Bottom is in. The increase is demand is pretty clear. And the demand is too strong for any deep retraces during this halving run up period. IMO. 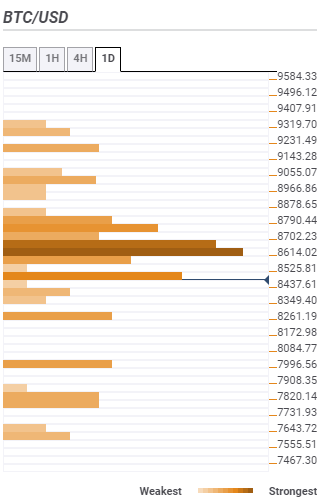 Bitcoin continues to press against key support areas and the sellers seem to be succeeding at their mission. Bitcoin dived under $8,500 on Friday further jeopardizing the run-up to $9,000. For now, the price is facing resistance at $8,525. The confluence detector places the second and third resistance at $8,614 and $8,702 respectively. The rest of the journey to $9,000 is likely to be relatively smooth apart from the minor hurdle at $8,790.

Bitcoin is not strongly supported according to the detector, therefore, it is essential that losses be alleviated above $8,400. Otherwise, Bitcoin could plunge towards $8,000, but before that, there is weak support that will try to stop the losses at $8,261.

Higher USD/JPY is still on the cards – UOB

Alan Draper3 years
Scroll Up
We use cookies to ensure that we give you the best experience on our website. If you continue to use this site we will assume that you are happy with it.Ok