Bitcoin bulls are making a comeback during the European hours. The Asian session was characterized by increasing pressure on short-term support areas. However, from an opening price of $9,221.91 Bitcoin has added more than 3% onto its value to exchange hands at $9,511.

The confluence tool shows Bitcoin trading towards a relatively smooth range. The next key hurdle is seen at $9,750 and is home to the Fibonacci 61.8% one-month, pivot point one-day resistance one and pivot point one-week resistance two. In the event, this zone’s resistance is cleared, Bitcoin will have the potential to rise above $10,000 and even scale the vital $10,200 resistance.

On the downside, Bitcoin is supported at various zones but the first one is the level at $9,261. Numerous indicators call this zone home including the Bollinger Band 15-mins lower, previous one-day, previous point one-week resistance one and the previous low four-hour. Further down, declines will find refuge at $8,967 and $8,478 respectively. 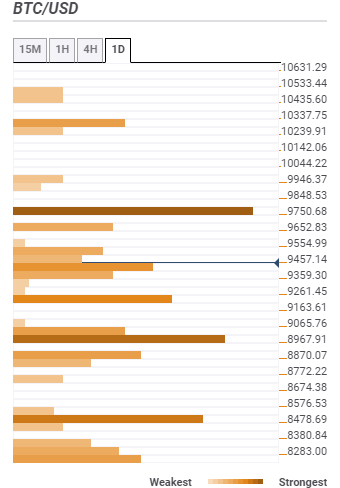