Bitcoin price is lethargic above $10,000 mid through the week’s trading. The king of cryptocurrencies managed to stay above $10,000 support after the recent upward move stalled short of $10,700.

While Facebook is battling with regulators for the launch of Libra, China and Telegram are speeding up developments to release their digital assets before the end of 2019. China’s cryptocurrency according to Forbes is dubbed DC/EP (DC- Digital Currency, EP – Electronic Payments). Interestingly, the crypto could be revealed as soon as November 2019.

On the other hand, Telegram, a leading social media messaging platform is also racing to release its Gram token in the next two months. Telegram runs a private ICO last year raising $1.9 billion. The New York Times reports that token distribution will soon commence and run through the next two months. Moreover, users on the platform can expect to get digital wallets for tokens.

It is clear that the battle to hit the market before Facebook’s Libra has gained momentum. How these two launches will affect the market remains to a wait and see matter. 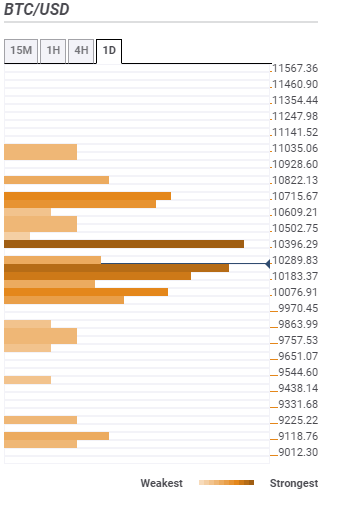 The confluence tool also shows Bitcoin’s shallow recovery from lows almost hitting $10,000 racing towards the next resistance at $10,286. The various indicators in the zone include the Fibonacci 61.8% 1-day, SMA 5 daily and the previous 15-mins. The next leg above this zone should bring Bitcoin to the strongest resistance at $10,396. Converging here is the SMA 10 daily, Pivot Point 1-day R1, previous high 1-day and the Bollinger Band 4-hour upper. Further up, $10,715 hurdle will hinder growth towards $11,000.

On the downside, support areas are not as strong. Therefore, the least the bulls can do is to sustain Bitcoin above $10,200. However, in the event declines progress, $10,183 will function as a credible support zone. The cluster of indicators forming the confluence range from the previous low 1-h, SMA 5 1-h BB 1-hr Middle and SMA 100 15-mins among others. The rest are weaker support areas including $10,076, $9,757 and $9,118. 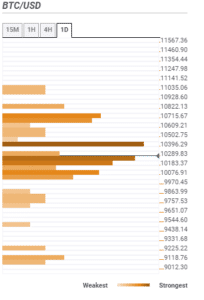