Currently, the overall outlook surrounding Bitcoin seems extremely bullish. As we have previously reported, the buyers are aiming for the $12,000-level and beyond. LunarCRUSH, a crypto community analytics provider, registered more than 540 million BTC-related mentions across multiple social media networks, with 66% of them being bullish about Bitcoin.

Despite the upward price action that the flagship cryptocurrency is going through, some of the most prominent analysts in the space believe that everything could be part of a “fakeout” or “dead cat bounce.” Such market behavior suggests that the ongoing uptrend will be short-lived before prices are forced to drop further.

As previously reported by FXStreet, the premier cryptocurrency had a bullish breakout from the symmetrical triangle this Thursday. 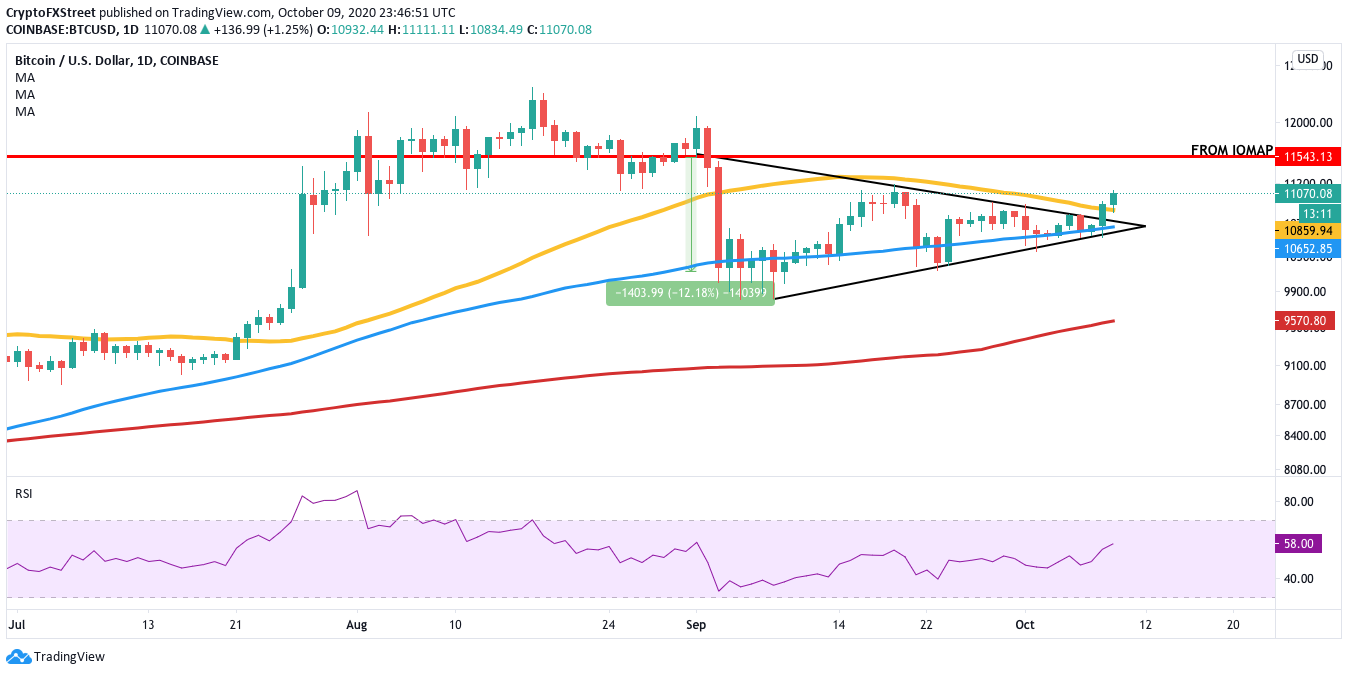 The 50-day SMA ($10,850) and 100-day SMA ($10,650) play a critical role in validating or invalidating the fakeout prediction. As per IntoTheBlock’s IOMAP, these two are, far and away, the strongest support levels for BTC.

The “In/Out of the Money Around Price” or IOMAP is a useful tool that can help us visualize strong resistance and support levels. The two healthiest support levels are at $10,850 and $10,650. In the former, around 1.45 million addresses had purchased 875,000 BTC and in the latter, nearly 2 million addresses had purchased 1.5 million BTC. If BTC crumbles under intense selling pressure and breaks below these levels, then the price will fall all the way down to the 200-day SMA ($9,500), validating the bearish prediction.

What adds further credence to this bearish theory is how whales have been behaving in the last 48 hours, which may hint at a spike in selling pressure.

Santiment is a cryptocurrency analytics platform and has several useful tools for on-chain analysis. One of these tools happens to be the “Holders Distribution” graph that helps one visualize the number of holders in different token brackets.

According to the graph, the number of addresses holding 1,000 to 10 million BTC reduced by 8 over the last 48 hours. So, it looks like the whales are selling off their tokens, which is a very bearish sign.

The Flipside: How can BTC strengthen the bullish narrative?

The immediate task for the buyers is very obvious, protect the 50-day SMA and 100-day SMA at all costs. As we have seen, any fall below this can be catastrophic. Plus, they should definitely make a push for the $11,600 resistance line. As per the IOMAP, this is the strongest resistance level on the upside. Clearing this will help BTC surge up to the $13,000-level.

Bloomberg recently published a report claiming that they expect BTC to reach $100,000 by 2025. In the report, the financial media giant made the following points to support their narrative:

However, if the bulls come through and manage to defend these levels successfully, they will need to break BTC to turn the $11,600 resistance line into support to prevent any dangers of a pullback or fakeout. Breaking past that level will give BTC a clear path to $13,000.

BTC’s recent price action has been deemed a fakeout by some prominent analysts. The 50-day SMA and 100-day SMA are critical levels that will determine the direction of future price movement. Blomberg released a report that predicts BTC to reach $100,000 by 2025. Currently, the overall outlook surrounding Bitcoin seems extremely bullish. As we have previously reported, the buyers are aiming for the $12,000-level and beyond. LunarCRUSH, a crypto community analytics provider, registered more than 540 million BTC-related mentions across multiple social media networks, with 66% of them being bullish about Bitcoin. Despite the upward price action that the flagship…