Latest
You are at:Home»Crypto News»Bitcoin price prediction: What next after testing key resistance? Confluence Detector

Bitcoin price has been lethargic in its trading since Friday last week. At attempt to stay above $10,400 resistance was met with rising selling pressure. Bitcoin also tested $10,600 before sliding back in the range between $10,200 and $10,400. Following the failed attempt to clear the resistance towards $10,600, many analysts believe that only a lower correction will give Bitcoin the strength it requires to rise above the psychological $11,000 level.

Meanwhile, a recent survey has revealed that wealthy millennials are putting their money in Bitcoin. The research conducted the United Kingdom law firm Michelmores and Comres showed that all of the 501 interviewed participants had acquired at least $25,000 of the leading cryptocurrency. According to the Senior partners ay Michelmores, Andrew Oldland QC:

“The survey result that 20% of those interviewed have invested in cryptocurrencies contrasts with a recent survey by the FCA which suggested a figure of 3% across the general population.

This suggests a willingness amongst millennials to move away from traditional forms of investment and to embrace new technologies, almost regardless of the risks – perhaps part of a new identity for a new generation.”

Bitcoin continues to lag breakout above the main resistance at $10,349. The clusters of indicators converging here consist of the previous low 15-mins, 61.8% Fib level, SMA 5 15-mins, SMA 100 one-hour, Fibonacci 38.2% daily and the previous high 15-mins among others. 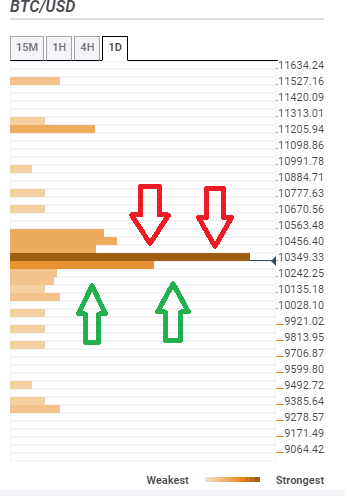 Trading above this level is likely to open the path towards $11,000. Besides the weak resistance at $10m456 and $10,563, the rest of the path to $11,205 is quite smooth. However, the downside is characterized by scattered weak support areas. The only strong support level is $10,242 and, therefore, it essential that the buyers push BTC above the main resistance to avoid a possible slide to the $9,000 range.

Get the 5 most predictable currency pairs
Previous ArticleOil surges, how will EMs react? – TDS
Next Article USD/CHF faces decent resistance at 0.9947/75 – Commerzbank