Bitcoin’s jump this week has been incredible as, after spending most of January between $30,000 and $40,000, the bellwether cryptocurrency finally made the ultimate swing to another historical high, around $48,000.

The nearly $10,000 growth in value has sparked criticism from various regulators and individuals, with some branding it a bubble. However, participants in the crypto space are not bothered, mainly due to this not being the first time Bitcoin has been referred to in that same manner.

Is Bitcoin’s rally a speculative mania?

The Deputy Governor of the Bank of Canada, Timothy Lane, dismissed on Wednesday Bitcoin’s majestic upswing as “a speculative mania” that “looks less like a trend.” His comments come after Tesla, the leading manufacturer of electric vehicles, announced $1.5 billion worth of Bitcoin to its balance sheet.

Speculation saw Bitcoin break above its former all-time high at $42,000 to achieve a new record high at $48,000. Before that, the founder of the Company, Elon Musk, had tweeted about buying BTC, impacting an upswing in the pioneer cryptocurrency price.

Central banks are unlikely to hold Bitcoin any time soon

The President of the European Central Bank (ECB) Christine Lagarde believes that central banks worldwide are not going to own Bitcoin anytime soon. During a conference call with The Economist, she reckoned that the idea is “out of the question.”

Lagarde has recently been very critical of the leading digital asset. Recently she said that BTC is highly speculative and carries with it “funny business.” Her opinion is that global regulation must be put in place to oversee the bellwether digital asset.

Despite her comments, the ECB president admits that the COVID-19 pandemic has bolstered digital currencies’ need.

A $10,000 spike in price is a move bound to raise questions, especially for people who are not ineptly speculative. Therefore, it is essential to get a comprehensive look at how Bitcoin will sustain this gigantic leap.

On-chain metrics continue to play a critical role in understanding BTC price action. For instance, Santiment’s NVT Token Circulation model suggests that the largest crypto still has a bullish impulse. The on-chain metric is also referred to as the Network Value to Transaction Ratio and helps in the industry’s valuation of coins.

A digital asset is considered to be overvalued when the value in circulation is significantly lower than its market cap. On the other hand, an undervalued digital asset will have a very high value transferred compared to the prevailing market valuation.

Meanwhile, the current NVT model reveals that Bitcoin has portrayed a semi-bullish trend for five straight months. Besides, the last couple of days have been extremely bullish in conjunction with the spike to all-time highs.

Consequently, Glassnode, a renowned behavioural analytics platform, shows that Bitcoin has a generally up trending network growth. The number of new addresses topped out at roughly 683,000 on January 7. A sharp dive occurred in the weeks leading to February. However, BTC unique addresses have been forming a higher low pattern since the beginning of February, as shown in the chart. 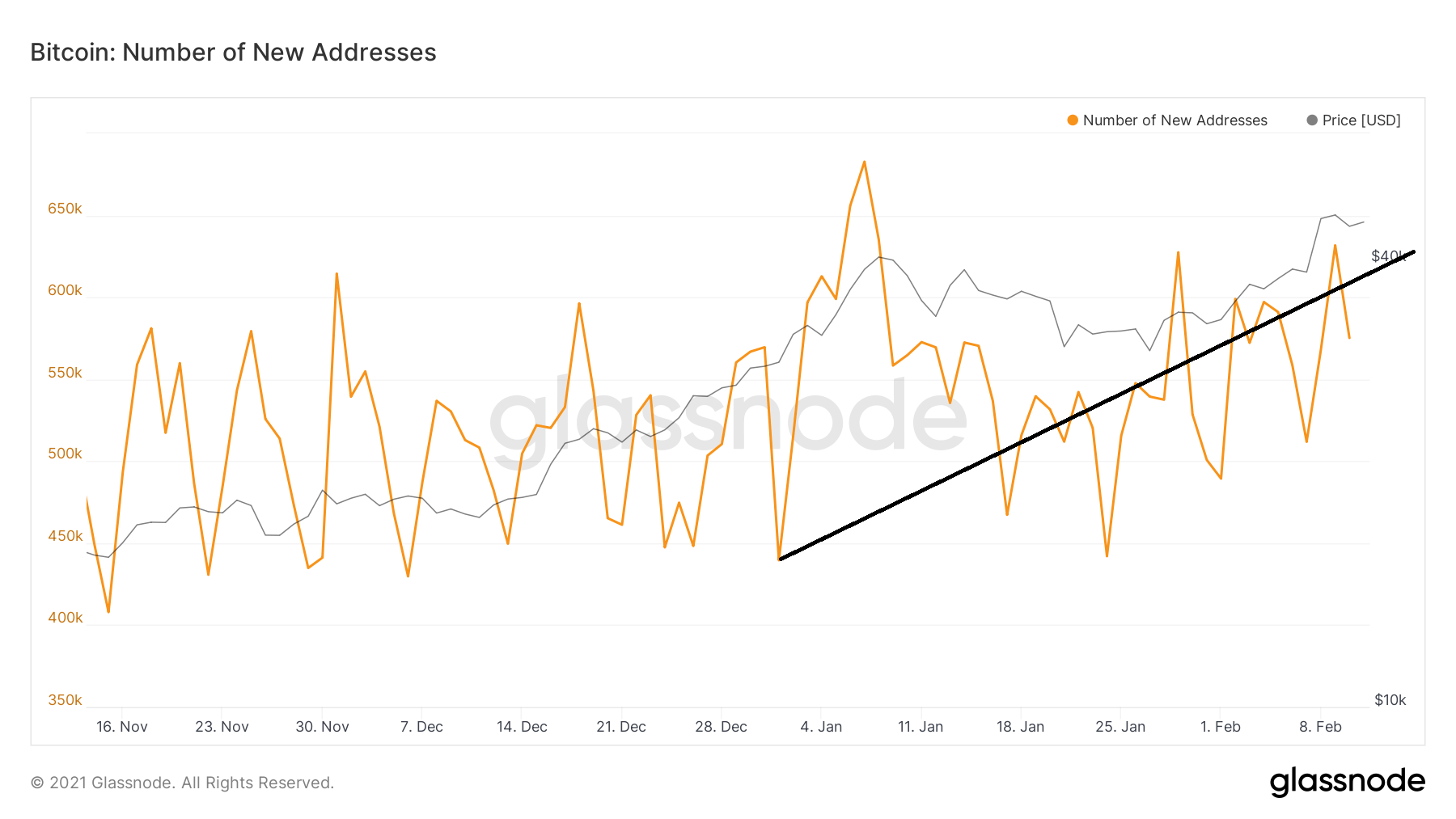 Bitcoin must hold above this crucial support zone

Bitcoin is trading above $45,000 after bouncing off support near $43,000. The ongoing recovery is likely to continue based on the technical outlook and the above on-chain indicators. The Moving Average Convergence Divergence (MACD) has reinforced the uptrend, with the vast divergence. Trading past $48,000 record highs will elevate Bitocin above $50,000.

On the flip side, massive losses may come into the picture if Bitcoin fails to close the day above the short-term support of around $43,000. Exploring levels close to $40,000 could also trigger more selling orders, thus increasing the overhead pressure. Although the 50 Simple Moving Average lags behind the price action, it will provide support near $35,000.

EUR/JPY pushes higher above the 127.00 level

Bitcoin rally to new record highs was a "speculative mania," according to the Bank of Canada's deputy governor. ECB President Christine Lagarde says that central banks are not likely to hold Bitcoin soon. BTC's NVT Token Circulation reinforces the recent rally, confirming that it was not a bubble. Bitcoin must hold above $43,000 short-term support to avoid breakdown to $40,000. Bitcoin's jump this week has been incredible as, after spending most of January between $30,000 and $40,000, the bellwether cryptocurrency finally made the ultimate swing to another historical high, around $48,000. The nearly $10,000 growth in value has sparked criticism from various…