Bitcoin bulls held firmly to the support recently established at $14,500 after trading new yearly highs close to $16,000. The upsurge was attributed to the tension created by the United States presidential elections in the stock market. Investors are said to have turned to Bitcoin and other selected digital assets seeking hedging options. Gold also rallied to $1,950 per once as the election tally delayed.

Stability has returned to the market, with Bitcoin bouncing off support at $14,500. The flagship cryptocurrency is changing hands at $14,960 at the time of writing. Consolidation is expected to take precedence in the coming sessions, as highlighted by the Relative Strength Index. On the brighter side, BTC/USD could extend the price action above $15,000, a move likely to call for more buy orders, increasing the tailwind and pulling Bitcoin to new yearly highs.

For now, the immediate downside is supported by the 50 SMA in case a correction overshoots the support at $14,500. The IOMAP model by IntoTheBlock suggests price action will be limited ahead of the new week.

On the upside, the seller congestion between $14,985 and $15,429 will absorb most buying pressure. The immense downside support exists to endure that BTC does not drop under $14,000. 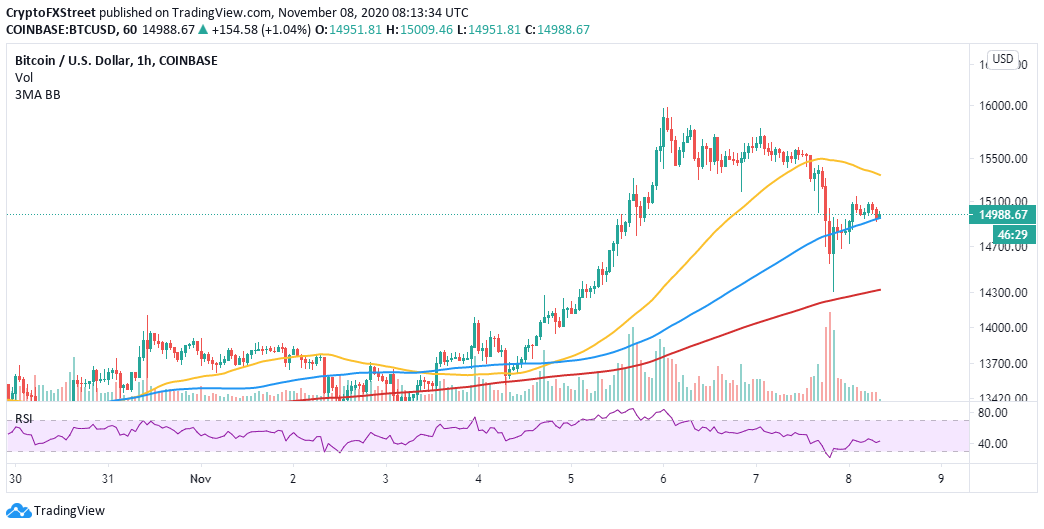 The hourly chart shows that Bitcoin must close the day above the 100 Simple Moving Average to avert a potential breakdown to $14,300, support highlighted by the 200 SMA. On the upside, selling pressure is expected at the 50 SMA, which will most likely delay the run-up to $16,000.