If you were starting to falter in your conviction that bitcoin is digital gold, then Bloomberg Intelligence has got your back.

A week ago, with the price breaking through $40,000, Bloomberg researcher Mike McGlone penned a report entitled Bitcoin Going For the Gold, in which he said laid out how price action reaffirms a price target of $100,000 by year’s end.

With $50,000 the next target for bulls, despite looming regulations and taxes coming through with the Infrastructure Bill, McGlone’s $100,000 call reiteration looks good to go.

The hyper bullish bitcoin price predictions  have been coming thick and fast ever since from around the cryptosphere, as if numbers were being picked out of thin air, but McGlone shows a little more rigour than your average twitter “crypto analyst”.

He advances three main arguments to back his case: the shift from China to the West and the attendant regulatory developments in the US as positive developments; growing adoption and the solidifying of bitcoin’s position as a store of value.

China shutting down mining in the country and barring companies from handling digital currencies  – or at any rate those issued by private entities as opposed to a central bank digital currency (CBDC) – and as a consequence the epicentre of trading activity in addition to network bookkeeping (computing power) moving West is a positive for bitcoin and crypto more widely. The new alignment underscores and reinforces cryptos promise as an industry born of the free market that will only innovate and thrive as such.

We could highlight some weaknesses in that reasoning, but the threat in the form of centralisation of bitcoin’s hash power in a jurisdiction that is currently strongly reasserting what it sees as the primacy of the state in the economy, has been removed.

The Bloomberg analyst doesn’t state this explicitly but at least one consequence of this centre of gravity shift may be an acceleration of renewable sources of energy for mining.

Here’s the key part from the outlook report:

Accelerating digitalization of money and finance emphasize the free-market capitalism attributes of crypto assets and the drawbacks of tightly controlled China. The U.S. embrace of digital assets with regulation vs. China’s increasing hostility are likely to play out favorably for Bitcoin and the dollar.

The second major leg of his bullish prognosis is adoption positivity. He doesn’t put it this way but McGlone essentially postulates that institutional players in payments are suffering from their very own version of FOMO. Even if some have their doubts about bitcoin as a means of payment, they are increasingly likely to look past them to make sure they are not in danger of falling behind competitors.

Although not cited in the report, on Monday Visa quietly announced that in July its customers spent $1 billion worth of crypto on goods and services. Visa has team up with Circle, Coinbase and BlockFi to build its crypto payment rail.

Elsewhere, a month ago PayPal increased the spending limit for crypto transactions from $20k to $100k.

PayPal subsidiary Venmo announced just this week that cash back rewards on its credit card can be converted into bitcoin and other cryptocurrencies at no charge.

Although McGlone sees ethereum as the leader in the digitisation of money, his thoughts in this context are relevant to bitcoin too , as our examples cited above show:

The digitalization of money and finance is accelerating and the go-to platform is Ethereum, which we see maintaining an upward price trajectory. There are few days that pass without headlines like “We have to be in the crypto space” from Mastercard’s CEO on July 30. The lessons of Kodak and Blockbuster mean most corporations are more likely to adopt the technology than risk falling behind.

Not touched upon in the Bloomberg report, but we could add that despite the IMF’s forceful misgivings, sovereign states such as El Salvador are willing adopting bitcoin as legal tender wile others – or rather their citizens – are doing so because they have given up on the official currencies, such as in Africa powerhouse Nigeria.

The last leg of the bull case from Bloomberg Intelligence is around store-of-value credentials.

He suggests the nature of those corrections favours “responsive buyers” and he expects to see the second half outperformance by all three assets.

He also sees the dollar as a key beneficiary of the rise of crypto, and he draws attention to its ubiquitous  presence as collateral for stable coins, although there’s no mention of the lack of transparency surrounding some of those coins, most infamously Tether, but also USDC which Coinbase now admits is not backed one to one by the US dollar and also uses various near-cash instruments (such as Treasury bonds) as collateral.

Bitcoin, gold and long bonds are top assets set to outperform in 2H, in our view. The fact that the metal and Treasury bond prices have been advancing for decades and recently dipped enhances their relative value, yet gold appears increasingly naked if not paired with Bitcoin. The crypto represents rapidly advancing technology pressuring inflation and supporting quantitative easing, which buoys the stock market.

There’s more in McGlone’s note, such as his assertion that the hash rate correction is over and his focus on bitcoin trading for its longer period since 2018-19 under the 20-week moving average as having the effect of squeezing the weak longs out of the market, or as he puts it “cleaned within an enduring bull market”.

The leading crypto has now built a base at $30,000 and is set to turn previous resistance at $40,000 into support, in McGlone’s view. That seems to have been confirmed by recent price moves, and is “back on track towards $100,000″ as McGlone predicts.

What’s changed in about three years is sufficient to sustain more of the same for most of Bitcoin’s history — rising prices. Supply is declining while demand and adoption are rising in most countries that welcome open discourse and free-market capitalism.

If you are looking for more information on the best cryptocurrency to buy, check out our guide. 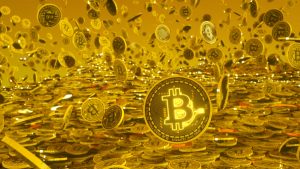 AUD/USD Price Bears to Hold Under 0.7400 Despite US CPI

If you were starting to falter in your conviction that bitcoin is digital gold, then Bloomberg Intelligence has got your back. A week ago, with the price breaking through $40,000, Bloomberg researcher Mike McGlone penned a report entitled Bitcoin Going For the Gold, in which he said laid out how price action reaffirms a price target of $100,000 by year’s end. [caption id="attachment_243469" align="alignnone" width="1440"] BTC price 20-week MA (red line), as at 11 August 2021. (Courtesy Messari.io. Data source Kaiko)[/caption] With $50,000 the next target for bulls, despite looming regulations and taxes coming through with the Infrastructure Bill, McGlone's…