Institutional interest in Bitcoin has experienced a massive increase over the past year, which has translated into significant growth in value, with the pioneer cryptocurrency gaining over $170 billion in market capitalization in the past three months.

One of the main propellers of the recent Bitcoin rally was PayPal. The global payments platform announced in October its new service enabling customers to buy, sell, or hold cryptocurrencies through PayPal directly.

No one can deny that financial institutions around the world are increasingly interested in digital assets like Bitcoin. Laurence Fink, CEO of investment management firm BlackRock, has recently stated that Bitcoin is gaining a lot of legitimacy as an asset class.

Fink is known for his skepticism of Bitcoin, and back in November 2018, he said that BlackRock wouldn’t offer cryptocurrency ETFs until the entire industry is legitimate. Fink has clearly changed his stance on Bitcoin and cryptocurrencies in general and believes they are an immense opportunity.

Both gold and Bitcoin have been rising significantly since the global market crash in March 2020 due to the coronavirus pandemic. It seems that people do not trust fiat money anymore and are deeply concerned about the long-term inflationary effects.

Max Keiser, a Bitcoin pioneer, believes the digital asset price is bound to rise in the future as fiat money continues to lose value. Similarly, Willy Woo, an outspoken Bitcoin enthusiast and trader, believes around 30% of the world population will own BTC in 4 years’ time.

What’s the next short-term target for Bitcoin?

Many analysts are looking at the On Balance Volume (OBV) indicator as it has established a robust uptrend since October. Similarly, Bitcoin price has been trading above a steep support trendline on the daily chart. 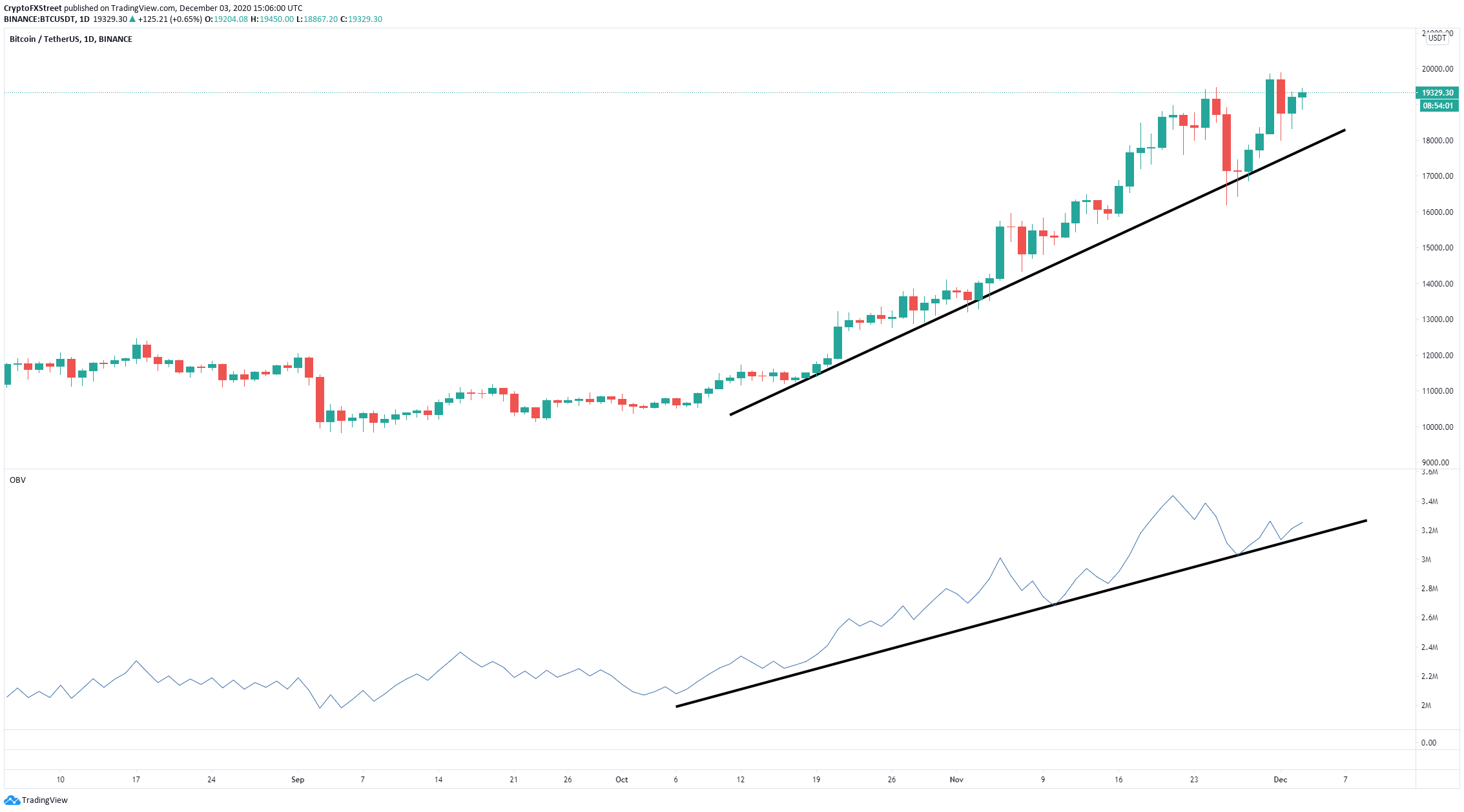 Additionally, it seems that while Binance Futures Open interest is growing significantly, the estimated leverage ratio is decreasing, which basically means that more investors are interested in Bitcoin but are less exposed to liquidations as they are using lower leverage levels. This is widely considered bullish.

Despite the numerous positive fundamental metrics for Bitcoin, the short-term still looks uncertain. Recent statistics show that the Bitcoin supply on exchanges has been increasing significantly over the past 15 days.

This is considered bearish as it is a potential indicator of investors looking to take profits and sell their coins. This theory seems to be confirmed thanks to the BTC Holders Distribution chart below. 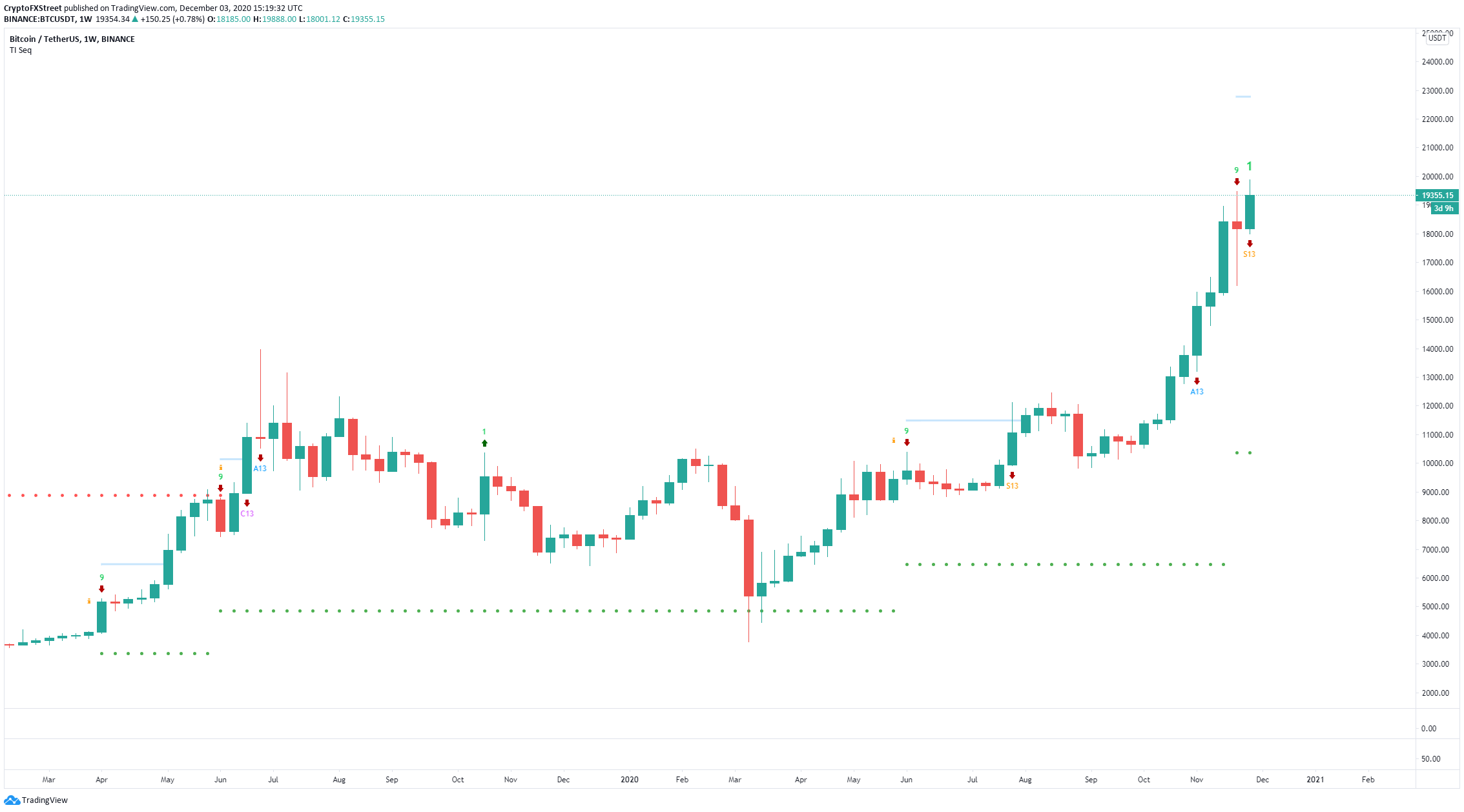 Furthermore, the TD Sequential indicator has presented a sell signal on the weekly chart, which has been a reliable call for the past few years. It also resembles Bitcoin price action back in 2016 when it was close to all-time highs.

Bitcoin price has hit a new all-time high on December 1 thanks to renewed interest in the digital asset. The support of cryptocurrencies by PayPal has been one of the major triggers of the current rally. Institutional interest in Bitcoin has experienced a massive increase over the past year, which has translated into significant growth in value, with the pioneer cryptocurrency gaining over $170 billion in market capitalization in the past three months.  One of the main propellers of the recent Bitcoin rally was PayPal. The global payments platform announced in October its new service enabling customers to buy, sell, or…