The cryptocurrency market started the downside correction after a strong rally initiated by risk reversal play at the beginning of January and reinforced by various altcoin pumps, including  Craig Wright’s saga and Ethereum Classic hard fork. At the time of writing, the total capitalization of all digital assets in circulation amounts to $226 billion; an average daily trading volume settled at $89 million, while Bitcoin’s market share recovered to 66.4% after a short-lived dip below 66.0%.

Central banks caught up in a crypto frenzy

Global regulators are increasingly interested in the concept of digital money. The central banks of Hong Kong and Thailand announced a joined project that will help to facilitate payments between the countries. They are looking into the idea of Central Bank Digital Currency (CBDC) to reduce risks and ensure transparency of cross-border transactions. The project is known as Project Inthanon-LionRock.

Also, central banks of England, Canada, Japan, the Eurozone, Sweden, and Switzerland have also joined forces to study and share their knowledge and experience related to CBDC. They are particularly interested in the use cases for the new type of money, including cross-border interoperability and economical benefits. The group will be headed by the deputy governor of the Bank of England Sir Jon Cunliffe and co-chaired by Benoît Cœuré, a former ECB board member and head of the BIS innovation hub.

Notably, many officials emphasized that these initiatives came as a response to the emergence of digital currencies in a private sector. Thus, Facebook’s Libra announced in 2019 and Telegram’s Gram is viewed as a real threat to the existing monetary order.

In a separate development, the World Economic Forum (WEF) revealed  CBDC Policy‑Maker Toolkit, the first framework for central banks that are interested in creating their digital coins. A community of over 40 regulators and financial institutes have been working on this set of guidelines to help central banks evaluate, design and potentially deploy CBDC.

Meanwhile,  according to the latest report of the Bank of International Settlements, over 80% of central banks are considering the idea of CBDC, though only 10% of them have proceeded to real development or pilot projects. Moreover, an overwhelming majority of the surveyed institutes confirmed that
public use of cryptocurrencies for domestic or cross-border payments was not significant.

Bitcoin’s market volatility recovered from the weekly low, though it is still below the recent high reached on January 15. Notably, the volatility rise was accompanied by the price decrease. At the current levels, over 70% of all Bitcoin addresses are in the money, while a break-even price by most of the accounts is around $12,000.

The first digital asset hit the highest level of 2020 at $9,184 and retreated below $8,300 before recovering towards $8,450 on Friday. Bitcoin was less volatile than some altcoins that experienced strong rallies during the week. As a result, its market share dropped to 65.3% on Wednesday and recovered to 66.5%.

On the downside, the pivotal support is seen at psychological $8,000. This area is reinforced by SMA100 daily and the upper boundary of the broken downside wedge. This barrier will be a hard nut to crack for Bitcoin bears. Most likely, it will attract new buyers that help initiate an upside recovery. However, once it is out of the way, the sell-off is likely to gain traction with the next focus on $7,650 (SMA50 daily).

The  Forecast Poll of experts has worsened slightly since the previous week. The expectations on monthly and quarterly timeframes remained bullish, while the weekly expectations are now bearish now.  The average price forecast on all timeframes moved above 8,000. Notably, the quarterly price forecast retreated below $10,000, which means that the experts are less optimistic about Bitcoin in the long run. 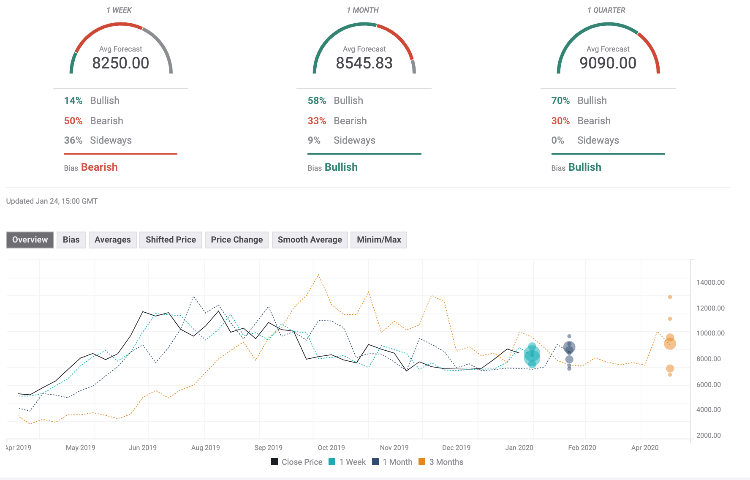 Globar regulators increasingly want to engage in the cryptocurrency industry. BTC/USD settled at an important technical level, down from weekly high. The poll of experts shows a marginal decrease in expectations in the short run. The cryptocurrency market started the downside correction after a strong rally initiated by risk reversal play at the beginning of January and reinforced by various altcoin pumps, including  Craig Wright's saga and Ethereum Classic hard fork. At the time of writing, the total capitalization of all digital assets in circulation amounts to $226 billion; an average daily trading volume settled at $89 million, while Bitcoin's…