The cryptocurrency market has been on recovery mode during the last week of January. Bitcoin and all major altcoin finished the month in a green zone, with some of them posting triple-digit gains. Dash and Ethereum Classic (ETC) has become growth leaders of the month with 181% and 145% of gains respectively. ZCash (ZEC) and Bitcoin Gold (BTG) also showed spectacular results.

What’s going on in the industry

Most of the price movements were unrelated to projects’ fundamentals and driven mostly by sentiments and speculative factors. The fact that 51% attack on the Bitcoin Gold network did not result in a coin’s sell-off supports this theory. Actually, the coin gained ground after the fact of attach was revealed.

Tax on miners reward is another talk of the week. Bitcoin cash mining pools suggested that miners should donate 12.5% of their rewards to a dedicated fund that would cash them out and use the proceeds to finance the ecosystem development. The controversial proposal stirred a lot of discussions in the community. Many industry leaders and criticized the idea as unsustainable and averse to the ecosystem.

Bitcoin Cash experienced a 5.5-hour time gap between blocks. BCH has been promoted as a fast and easy means of payment that can be used instead of fiat cash for everyday purchases. However, critics pointed out that such delays make BCH unsuitable for this purpose. Moreover, some experts noted that the delay might have been caused by miners attempt to sabotage the network operation to protest against 12.5% tax.

Meanwhile, Europe-based cryptocurrency projects continue collapsing in a wake of new EU regulation. The Netherland-based XRP-developer Wietse Wind announced the closure of XRPtext project. He cited low interest and tough regulatory conditions as primary reasons behind the decision. Also, Malta-based cryptocurrency exchange GO.Exchange closed the business due to the same reasons. The company said that the process of licensing is too costly and burdensome. The project is a subsidiary of Omise Holding and a part of Omise (OMG) ecosystem.

Bitcoin bottomed at $6,432 on December 20 and has been recovering ever since. The first digital coin hit the highest level since the beginning of November 2019 at $9,568 during early Asian hours on Friday, which is also the highest level of 2020. The upside momentum proved to be unsustainable as the coin dropped to $9,200 and thus reversed all the gains of the previous day. However, despite the retreat, BTC/USD is still nearly 10% higher on a weekly basis. Since the beginning of the year, Bitcoin gained over 29%.

At the current price, over 75% of all Bitcoin addresses are in the money, which considered a bullish signal as it supports optimism on the market. Meanwhile, 30-day volatility has stayed virtually unchanged at 39% since November.

From the technical point of view, the upside is limited by $9,300. This resistance area is created by 38.2% Fibo retracement for the downside move from July 2019 high to the recent low hit in December 2019. This area stopped the recovery attempts at the end of October and triggered a bearish wave that took the price to the recent low. It means that bulls are going to have a hard time clearing this barrier. However, once we have a weekly close above this level, the upside momentum will start snowballing with the next focus on psychological $10,000, closely followed by the next Fibo retracement for the above-said move.

On the downside, the initial support is created by SMA200 daily currently at $8,800. This barrier separates us from the deeper decline towards 23.6% Fibo retracement at $8,250 and SMA100 daily at $8,000. This psychological area is also reinforced by SMA50 weekly. We will need to stay above this area to retain a long-term bullish stance for Bitcoin. A sustainable move below this level will negate bullish scenarios and bring $7,100 back into focus. This barrier is reinforced by SMA100 weekly.

Notably, the daily RSI has reversed tot he downside from overbought territory, while weekly RSI still points upwards. It means that the coin may be vulnerable to the downside correction within the current bullish trend.

The  Forecast Poll of experts has improved significantly since the previous week. The expectations on all timeframes are now bullish, the average price forecast moved above 9,000. Notably, the quarterly price forecast jumped above $10,000, which means that the experts are now more optimistic about Bitcoin in the long run. 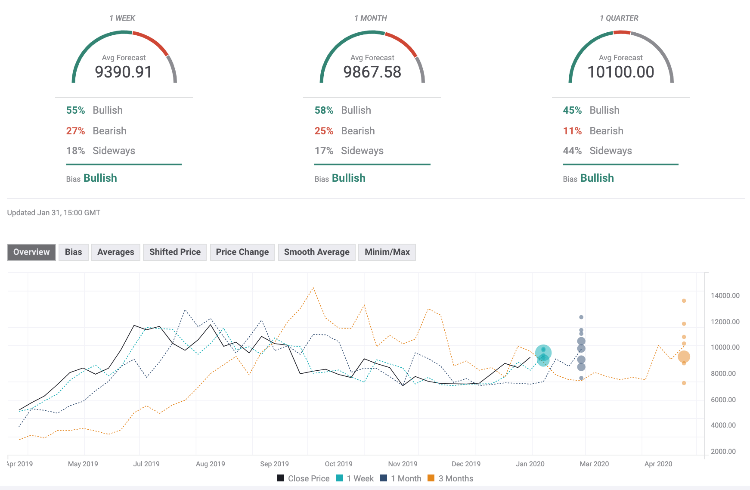 EUR/USD approaches a 1.1100 as the US dollar drops further versus majors

The cryptocurrency market has continued the recovery with altcoins showing the best results. Fundamental developments in the industry are totally unrelated to price momentum. Bitcoin is vulnerable to technical correction within the upside trend. The cryptocurrency market has been on recovery mode during the last week of January. Bitcoin and all major altcoin finished the month in a green zone, with some of them posting triple-digit gains. Dash and Ethereum Classic (ETC) has become growth leaders of the month with 181% and 145% of gains respectively. ZCash (ZEC) and Bitcoin Gold (BTG) also showed spectacular results.  What's going on in…