Home » Bitcoin Weekly Forecast: BTC gets a ticket to the moon

Bitcoin Weekly Forecast: BTC gets a ticket to the moon

The cryptocurrency market has had another stellar week. Bitcoin has gained 5% on a week-to-week basis, and this not the best result as many top altcoins registered double-digit gains. Thus, Tezos (XTZ) is now 33% higher from this time seven days ago, Ethereum (ETH) jumped by 22%, while Binance Coin (BNB) grey by 20%. Unsurprisingly, Bitcoin’s dominance dropped to multi-months low of 64.1%. The parameter hit the recent high at 72% on January 3 and has been declining ever since. This momentum prompted heated discussions about the upcoming altseasonand the further decline towards 60% will serve as a confirmation for this theory.

What’s going on in the industry

Regulators and governmental authorities all over the globe dive deeper into the ocoan of blockchain tecnologies and digital money philosophy. Thus, the Federal Reserve System (FED) has been researching the concept of central bank-issued digital currency and contemplating the development of digital dollar. According to Board member Lael Brainard, the regulator should be ready to deal with a new type of money to ensure the efficiency and compliance of the existing payment networks.

Notably, other central banks also confirmed their interest in the concept, though non of them – except for the Chinese People’s Bank – has moved far from a research stage.

In a separate development, the commissionaier of the US Securities and Exchange Commission (SEC) Hester Pierce, often referred to as “Crypto Mom” for her loyal attitude towards cryptocurrency industry – proposed to soften the requirements to token sales launched by blockchain and cryptocurrency startups. She believes temporary exemptions will help the teasm to rais e money and push their projects to a new level. The chances for the approval are slim as the head of the SEC, Jay Claiton has an opposite view on the matter. Anyway, the market interpreted the news as a positive signal and sent BTC rates soaring.

Brexit and coronavius put more fuel to the fire

Geopolitical uncertainties and the fears of economic slow down proved to be supportive for the digital assets. Bitcoin’s correlation with gold strengthened as the coin has been increasingly used as a safe-haven agains global risks. Most likely, these issues will continue dominate the market sentiments and support Bitcoin’s rally in the weeks ahead.

Bitcoin printed the second bullish candle on a weekly chart and settled above several important technical levels. At the time of writing, BTC/USD is changing hands at $9,750, and many experts believe that psychological $10,000 may be tested in coming days.

Meanwhile, RSI both on daily and weekly charts suggest that the coin may spend some time in a current range before the bullish trend is resumed. Thus, the daily RSI stays flat close to an overbought territory, While weekly RSI showing signs of reversal. Anyway, a short-term correction towards $9,300 may precede another bullish wave. This support area is strengthened by 38.2% Fibo retracement for the downside move from July 2019 high to the recent low hit on December 2019.

This area served as a strong resistance during the previous week and stopped several the recovery attempts, which means it may slow down the bears and initiate a new bullish wave that will finally take BTC to  the long awaited $10,000. However, if $9,300 is broken, the sell-off may be extended towards $9,000 and $8,850 reinforced by SMA200 weekly.

On the upside, a sustainable move above $10,000 will unlock strong bullish potential and let numerous algo bots off the leash. As a result, BTC/USD may smash $10,500, which includes the previous recovery high and the highest level since October 2019. and jump right towards $11,000 in a twinkling of an eye. FOMO (Fear fo Missing out) and hype in social and crypto media will do the rest.

At the current price, over 83% of all Bitcoin addresses are in the money, which the highest level since August 2019. It means that the majority of Bitcoin holders are making money at this stage, which is a supportive factir that fuels optimism and attracts new players.

The  Forecast Poll of experts has improved significantly since the previous week. The expectations on all timeframes remained bullish, with 80% of respondents believe that Bitcoin will grow on quarterly basis.  The average price forecast on all timeframes moved above 9,000. Notably, the quarterly price forecast spiked above $11,000, which means that the experts are more optimistic about Bitcoin in the long run. 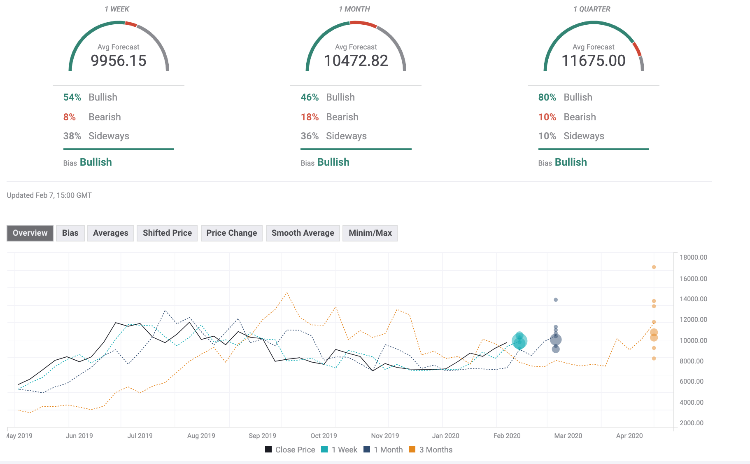 USD/CAD: A bounce-back for the loonie – NBF

Bitcoin's market share dropped to multi-months low sparkling speculations about altcoins season. Regulators all over the world are busy researching the new technology to stay on top of things. The technical picture implies that Bitcoin may enter a range-bound phase before another bullish wave. The cryptocurrency market has had another stellar week. Bitcoin has gained 5% on a week-to-week basis, and this not the best result as many top altcoins registered double-digit gains. Thus, Tezos (XTZ) is now 33% higher from this time seven days ago, Ethereum (ETH) jumped by 22%, while Binance Coin (BNB) grey by 20%. Unsurprisingly, Bitcoin's…