Home » Bitcoin’s mass adoption passes the point of no return

Bitcoin’s mass adoption passes the point of no return

Bitcoin was created in response to the Financial crisis of 2008 and developed within a narrow circle of computer geeks, coders, and libertarians fixated on personal freedom, anonymity, and independence from all sorts of authorities. Sometimes drug dealers and gun traders got interested in the new type of money. It allowed them to do their shady business sidestepping banks and other state-controlled and regulated financial institutions.

However, time passed, Bitcoin matured and gained popularity among ordinary people, interested in innovations and new ways to invest money and preserve wealth. New coins emerged based on the same idea of the distributed ledger, and the cryptocurrency industry entered a new era of mass adoption.

While the process is still ongoing, it is safe to say that we have already passed the point of no return.

Emerging countries, especially with weak economies and high inflation, demonstrate a strong interest in digital currencies. The latest statistical data confirms the theory that Bitcoin may serve as a protective asset or a hedging tool in the ailing economies.

The data from Statista shows that cryptocurrency is most prevalent in Turkey, Brazil, and Colombia. According to recent surveys, 20%-18% of the population in these countries own digital assets. Columbia, Argentina, South Africa, and Mexico also boast a high percentage of crypto holders.

The distribution of cryptocurrencies around the world 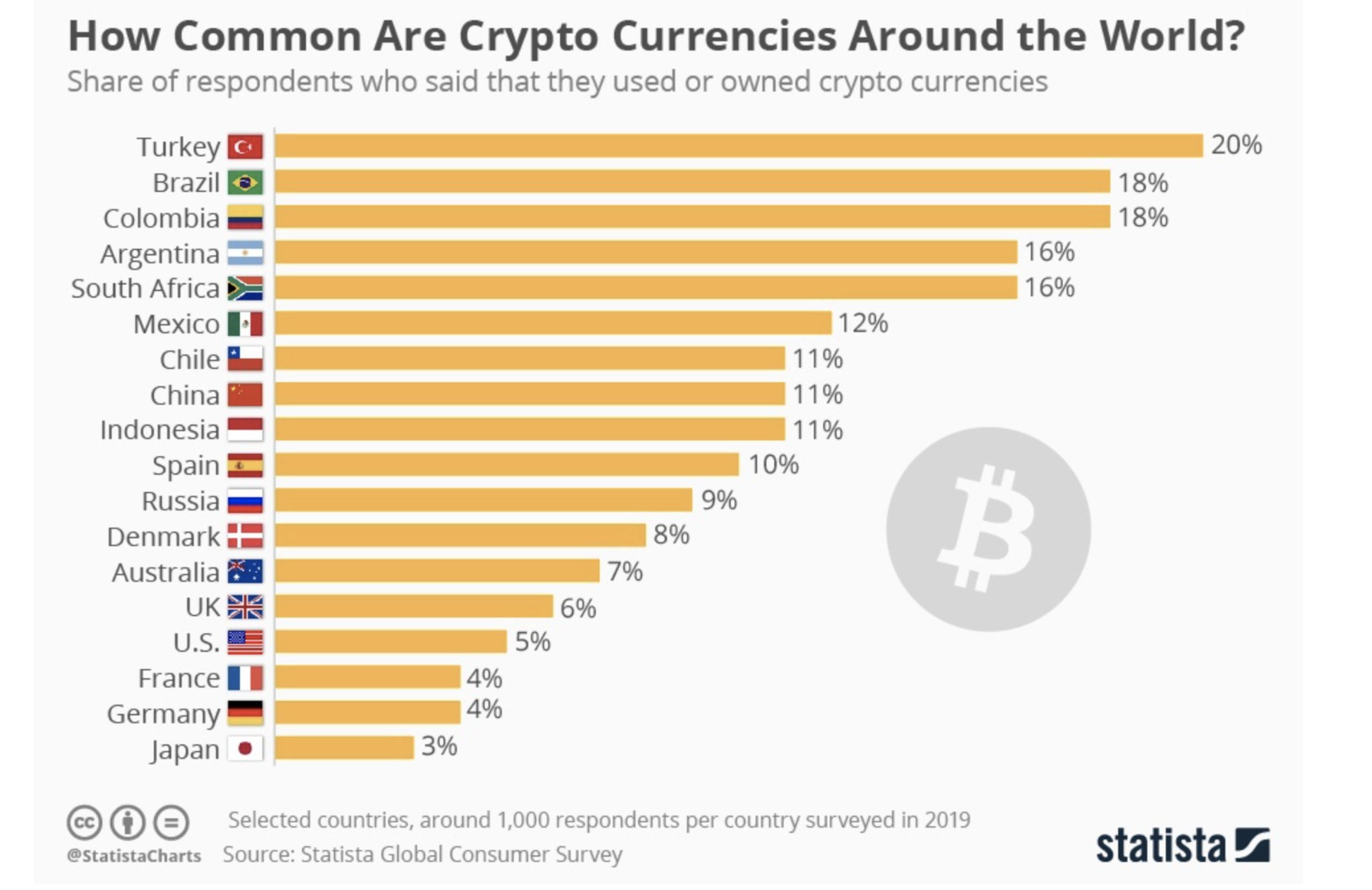 Notably, the developed countries like the UK, US, or Japan are at the end of the list with less than 7% of users. It means that citizens from the troubled countries tend to reduce their national currencies exposure and resort to alternative ways of storing wealth.

Data from the P2P Bitcoin trading platform LocalBitcoins shows that the trading volumes are growing strongly in the South American countries and in Africa, where the small cryptocurrency transfers increased by over 50% in the last year.

If the trend continues to gain momentum, the developed world will have to follow. The irresponsible monetary policies in such countries as the US will only speed up the process. CFA Charterholder and founder of investment platform Revix, explains the phenomena:

“Money is meant to act as a stable store of value. But for many emerging market citizens, this is not the case. Their currencies have deteriorated in value to the point where their hard-earned savings are worth far less in real global terms.

“Lots of people think they’ve already missed out on crypto’s growth. However, its value today is only a tiny fraction of the trillion-dollar markets that it stands to disrupt. What if even a single cryptocurrency becomes the currency of choice for a nation plagued by hyperinflation or if the Federal Reserve prints another $3-trillion?”

The monetary authorities and financial regulators around the globe moved from the denial stage to constructive thinking. The US tax authority wants to update its standard 1040 form with the aim force the citizens to report their cryptocurrency holdings.

Sure enough, this move is an unwanted development for those who use Bitcoin for tax evasion purposes. However, it may signal that the authorities have already come to grips with the idea that digital currencies are not a joke or a short-lived trend, but they are here to stay.

The European Commission recently published a comprehensive proposal on integrating the new type of assets into the existing financial system. They are ready to develop rules for those instruments that cannot be covered by the existing legislation. This is another evidence that cryptocurrencies are considered as an objective phenomenon that needs to be reckoned with.

Note how big players with big pockets enter the cryptocurrency space and motivate it by the necessity to protect their assets from inflation. As the FXStreet recently reported, Grayscale Investments added 17,000 BTC to their portfolio, while the CEO of MicroStrategy confessed that Bitcoin investments are an attempt to preserve their wealth. The company spent about $500 million on Bitcoins recently.

According to the famous cryptocurrency analyst Willy Woo, many crypto market participants are captivated by short-term price movements, temporary correlations, and technical setups. Meanwhile, the big money and real HODLers are focused on long-term perspectives, and they are bullish.

The expert also emphasized that in the long run, Bitcoin is not correlated with the traditional markets. Immunity against economic disasters, negative consequences of faulty monetary policy decisions, and geopolitical risks make it a perfect hedge for strategic investments.

Michael Saylor from MicroStrategy shares a similar view. He believes that BTC investments as a store of value (adoption) and pouring free cash flow in cryptocurrency (productivity) are critical ingredients of Bitcoin’s success.

4. Number of active users is growing

Bitcoin is used more actively than in 2017 when the ICO mania gripped the industry, and BTC cost nearly $20,000. According to the Glassnode’s data, the number of unique users, excluding multi-wallet addresses belong to one entity, has been growing since May 2018 and surpassed the all-time high reached in December 2017. Moreover, the trajectory points upwards, implying that Bitcoin is spreading faster than ever. 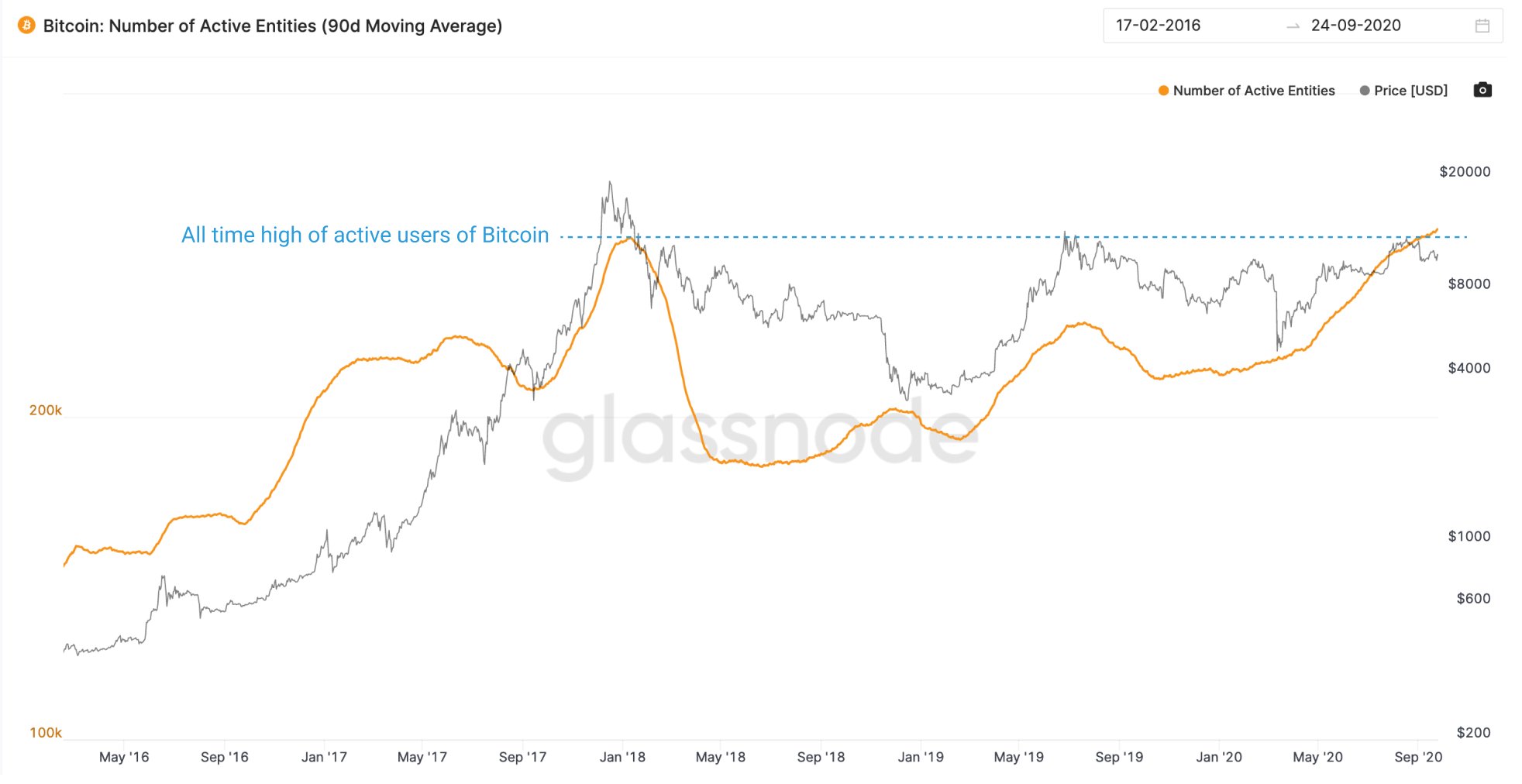 The stats are confirmed by Coin Metrics data on Bitcoin addresses with at least $10-worth of BTC. The number of addresses hit a new record high of 16.6 million in August, which is 14% higher from the previous maximum reached at the top of the 2017 bubble.  Basically, it means that people are using Bitcoin and joining the network more readily than at the height of the previous bull market.

To conclude: Short-term Bitcoin price movements have little effect on the cryptocurrency mass adoption. The process has already started, and it is gaining pace as the technology becomes more mature and user-friendly for non-tech savvy people.

Creating a legal field and a regulatory framework for the new type of assets will lift the barriers that stopped large institutions and cautious retail users from joining the industry. At the same time, economic woes and geopolitical tensions will only speed up moving to alternative money.

Bitcoin's mass adoption process has already started. Institutional and regulatory interest confirms that the new phenomenon is going mainstream. On-chain data supports the theory that BTC's popularity is growing. Bitcoin was created in response to the Financial crisis of 2008 and developed within a narrow circle of computer geeks, coders, and libertarians fixated on personal freedom, anonymity, and independence from all sorts of authorities. Sometimes drug dealers and gun traders got interested in the new type of money. It allowed them to do their shady business sidestepping banks and other state-controlled and regulated financial institutions.   However, time passed, Bitcoin…