It’s not looking like a promising start for sterling this week in forex pertaining to COVID and Brexit risks.

The latest on covid is that there is a new strain of the virus which prompted the UK government to impose a Tier 4 lockdown in London and southeastern England and tighten restrictions for all of England over the festive period.

The new variant is “out of control,” Health Secretary Matt Hancock said on Sunday.

In a hastily called Saturday press conference, Johnson said that the strain of the virus appears to spread more easily, and may be up to 70% more transmissible than the earlier strain.

Chief Medical Officer Chris Whitty said on Saturday that the new variant is responsible for 60% of infections in London, which have nearly doubled in the last week.

UK Prime Minister Boris Johnson on Saturday broke the news that London and large parts of southern and eastern England, where cases are surging, would enter Tier 4 restrictions, similar to the lockdown seen in Spring — just days after reiterating his pledge to relax rules over the Christmas period.

Brexit snowed in for Xmas

If the COVID news wasn’t enough to put a dampener on Xmas spirits for the pound, we are still no closer to a Brexit deal as negotiations go to the wire.

After nine months of talks, and with just 11 days to go before the end of the transition period when the UK will leave the EU’s single market and customs union, media has been reporting negative comments from officials all weekend:

‘It ‘is increasingly likely the UK will end its post-Brexit transition period without a free trade agreement with the EU.”

”There will be no post-Brexit trade deal between the UK and EU unless there is a “substantial shift” from Brussels in the coming days.”

”It is understood there is likely to be a decision before Christmas on whether or not a deal can be reached.”

”This was not the only remaining issue left to resolve …”

”’The UK has other demands and the level playing field is not sorted.”

Michel Barnier has been told by the European fishing industry that his latest offer to the UK amounts to selling coastal communities “down the river” as negotiators continue to haggle in Brussels over a post-Brexit trade and security deal.

There is a deadline to the extent that the transition period ends at 11 pm Greenwich meantime on 31 December.

However, traders should know by now that the only thing that is dead by the time that these come around are the deadlines themselves.

There have been many other deadlines along the way – all of which seem to have come and go.

If there is no agreement by the 31st, it actually doesn’t mean that’s it, no deal, because there is no legal requirement in the treaties for the European parliament to hold a consent vote. Instead, there will be processes in Brussels before any legal text can be approved, but it could be provisionally applied on 1st Jan for the European parliament to consent to a vote later in the month.

But there is a UK ratification process to keep in mind as well that would probably need 48 hours’ notice for the House of Commons to be recalled and MPs will want to have their own look at what has been agreed.

All in all, the uncertainty that has plagued the pound for many years is about the only certainty for the foreseeable future which should be a weight on cable in for the week ahead and for today’s open.

If last weekend’s opening gap is anything to go by, then there could be around 100 pips at stake, exposing the mid-Dec structure between 1.3445 and 1.3395 session liquidity.

From a volume profile analysis, 1.3323 marks the naked point of control for 14th December’s business.

The fundamentals would marry with what appears to be a bearish head & shoulder pattern in the making.

Moreover, for the week ending 8 December, US Commodity Futures Trading Commission (CFTC) data, the biggest move was recorded in GBP.

GBP experienced a large short-squeeze due to what had been improving Brexit-related sentiment resulting in the positioning gauge jumping into positive territory, (+4% of open interest) for the first time since late September.

The deterioration in sentiment and another deadline missed has since seen the latest data trimming longs by 2K according to the weekly FX positioning data for the week ending December 15, 2020. 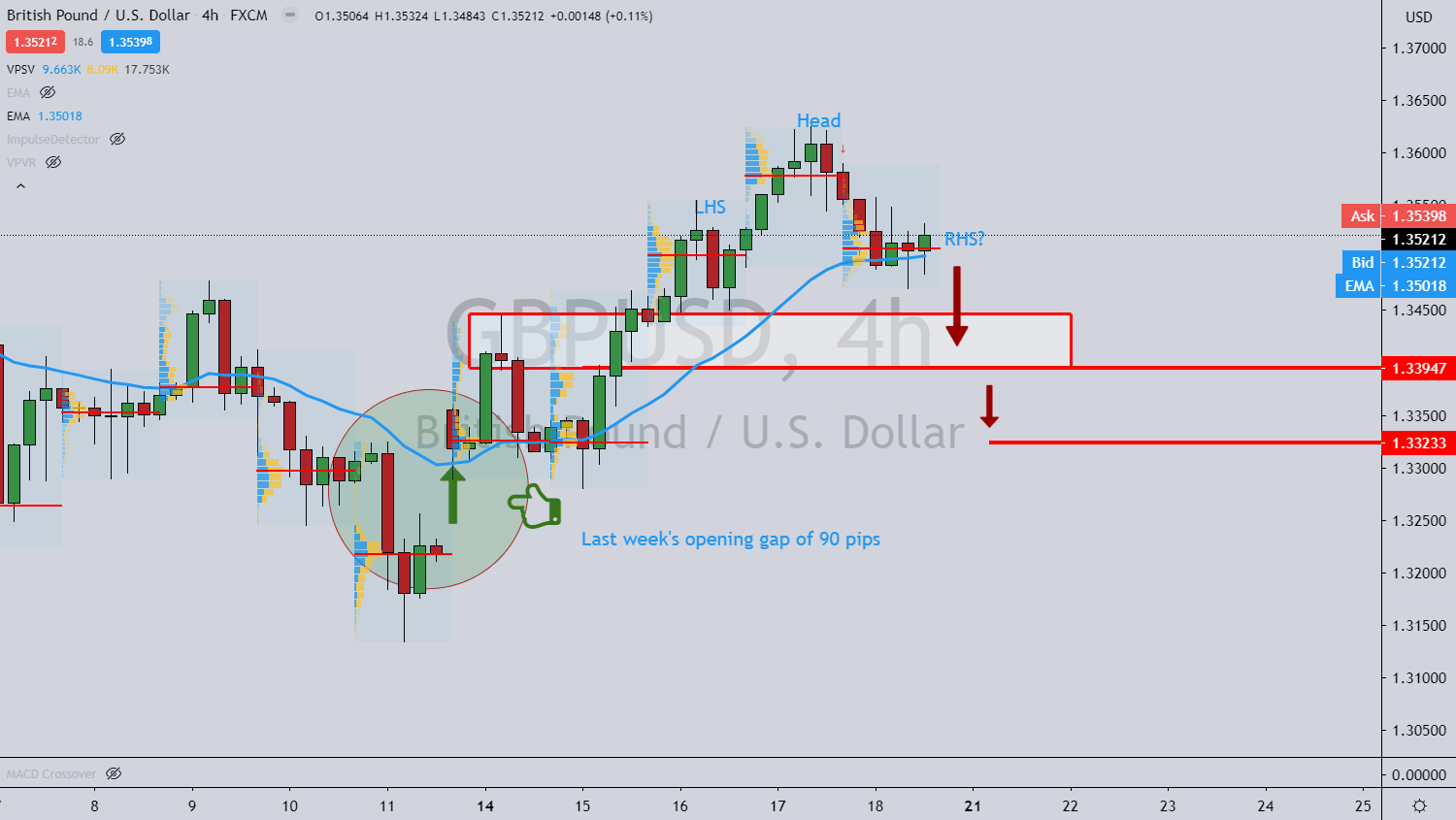 Indicative prices for the open today will be out shortly.

GBP/USD set to open on the offer following dismal weekend news from the UK. Brexit and COVID risks will make for a terrible Xmas gift for GBP longs. It's not looking like a promising start for sterling this week in forex pertaining to COVID and Brexit risks. The latest on covid is that there is a new strain of the virus which prompted the UK government to impose a Tier 4 lockdown in London and southeastern England and tighten restrictions for all of England over the festive period. The new variant is "out of control," Health Secretary Matt Hancock said on…