The PM Boris Johnson issued an ultimatum to negotiators on Monday, saying an agreement must be reached by 15 October or Britain will walk away.

This gave rise to an immediate trade opportunity in selling the pound as it attempted to close the opening gap, as follows: 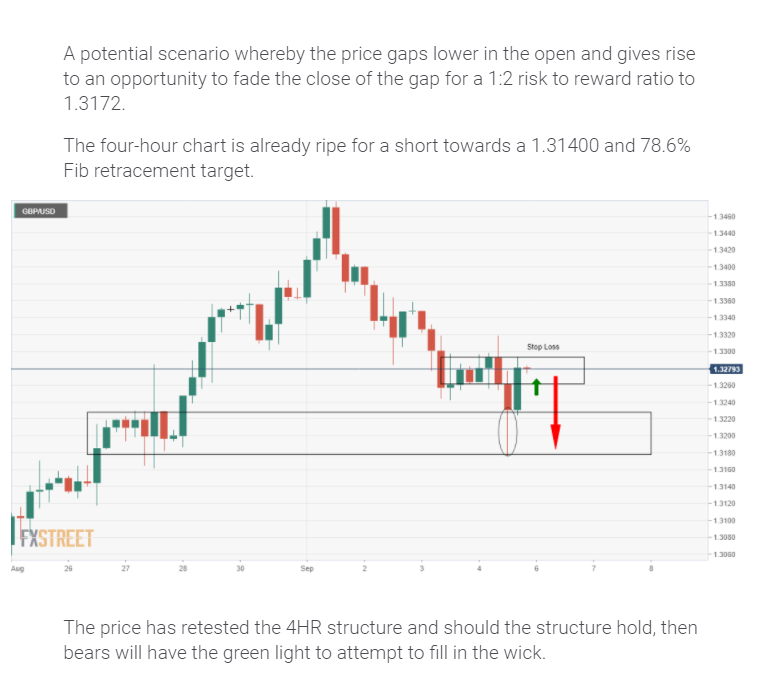 Meanwhile, the saga continues and it does not look good for the pound, but that is where the next opportunity can be found.

Michel Barnier, the EU’s chief Brexit negotiator, will arrive in London on Tuesday with a stark warning to Boris Johnson.

The Financial Times reports that Barnier will tell Johnson that unless Britain stands by its previous commitments there is no prospect of a free trade agreement by the end of the year.

However, Boris Johnson has already said that he intends to pass a law overwriting parts of last year’s withdrawal agreement relating to Northern Ireland.

All in all, trade talks this week in London are not expected to make any significant breakthroughs, with Mr Johnson refusing to give details of the UK’s plans for a future regime to control subsidies.

They had already promised to be difficult because of entrenched disagreements about state aid rules and fishing rights.

Meanwhile, the Guardian has published an article following the commotion that reports that Business leaders have warned Boris Johnson that securing a Brexit deal is essential for safeguarding Britain’s economic recovery from the coronavirus outbreak and avoiding higher prices in the shops for British consumers.

“Amid all the noise and negotiations, businesses in the UK and EU remain clear – a good deal is essential. An agreement will be the foundation for post-Covid recovery across the continent.”

“Getting a deal requires political leadership and compromise from both sides.That is needed urgently in the coming weeks.”

“A no deal would be the worst outcome for consumers,” said Andrew Opie, director of food and sustainability at the British Retail Consortium.

“Getting Brexit done by year-end with a minimum of concessions to the EU is probably now a matter of political survival for Boris Johnson. So, the probability of a no-deal Brexit continues to increase, unfortunately.”

Where is the next opportunity in GBP?

Well, fortunately for the forex market, volatility, technicals and fundamentals are a good mix.

The following is a scenario whereby the pound continues to lose its appeal over the course of the negotiations which gives rise to a swing trade opportunity in EUR/GBP as follows:

Cryptocurrency Market Crash: How to properly buy the dip when the market crashes

The start of the week's news for financial markets came with the latest Brexit headlines. It was reported in various media that Britain has backslid on last year’s Brexit divorce agreement. The pound was under pressure from the get-go and the outlook remains dire for the British currency.  The PM Boris Johnson issued an ultimatum to negotiators on Monday, saying an agreement must be reached by 15 October or Britain will walk away.   This gave rise to an immediate trade opportunity in selling the pound as it attempted to close the opening gap, as follows: Brexit: Trade talks on knife-edge, sterling vulnerable to…