Inflation Data is the main event this week. Here is an outlook on the major market movers for the Canadian dollar, and an updated technical analysis for USD/CAD.

Canadian housing starts rose  slightly by 0.8 % in January signaling the housing sector will continue to weigh on economic growth. It is forecasted that the housing market  which led the country out of the recession will moderate through 2011 hindering economy’s growth. 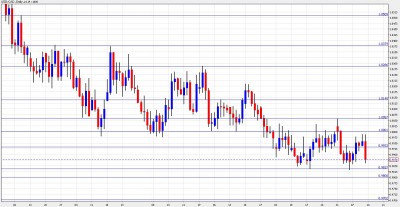 All times are GMT.

The Canadian dollar began the week with a retreat. USD/CAD rose but bounced off the parity line (mentioned last week) before falling down and closing at 0.9878, almost unchanged from last week.

Looking down, 0.9840 serves as immediate and strong support – a double bottom that prevented further falls. It’s followed by0.98, which was a support line back in 2008 is very close by.

Looking up, 0.9930 is the immediate resistance line after being a bottom in 2010. Above, USD/CAD parity is the obvious line of resistance, working in both directions in the past few months.

Higher, 1.0060, the highest level in the past month or so is another resistance line. It’s followed by 1.0140, which  served as resistance in December and also as support in the past.

Above, 1.0280 also worked in both directions, being resistance recently. 1.0380 was another resistance line, that capped a break more than once, and is strong resistance. Further above, the next line is  1.05.

The Canadian dollar enjoys a stronger Canadian economy as well as a stronger US one and rising commodity prices.