Canadian dollar having a tough time

After a mixed overnight Asian session in regards to equity performance, there is little red on the board for Black  Friday, as North American equity futures continue a low volume melt-up ahead of the opening bell.   The Nikkei was unable to finish the week with an up day, despite better than expected inflation data that boosts optimism the monetary and fiscal policy reforms are indeed showing signs of life.   Japan’s core-core CPI index on a m/o/m basis increased by 0.3% over the previous twelve months, besting the 0.2% analysts had expected, and marks the first increase in the index since October of 2008.

The ability to ward off the deflation monster will no doubt give Prime Minister Abe confidence that the reforms are working, however is not enough of a positive development to assume the Bank of Japan will be able to achieve their inflation target at a sustained level without more easing and help from monetary policymakers.   The yen weakness on the inflation numbers pushed USDJPY into the mid-102s, but only to see the original move quickly retraced with the pair sliding back into the low-102s midway through the European session.

Continuing with consumer price data, Eurozone CPI numbers also hit the wires overnight, allowing for a bit of a reprieve from the dreary money supply and private loan data that we saw  on Thursday.   The headline reading came in with a modest beat of analysts’ estimates, printing at 0.9% y/o/y, up from the 0.7% that was registered in October but still well below the European Central Banks 2% target.   Unemployment in the zone was also a little rosier than in the prior month, with employment data showcasing the jobless rate in the common-currency bloc fell to 12.1% in October from the 12.2% record high that was witnessed in September.

The slightly perkier economic data for the EZ does little to dispel calls for further action from the ECB, as we are likely to see continued softness in prices and employment as further slack in the economy and a relatively strong euro act as headwinds moving forward.   The EUR is holding firm against the USD this morning, pivoting around 1.36 ahead of the opening bell in North America.   The most prominent data point for today’s North American session was the release of GDP for the Canadian economy in the third quarter.

The penultimate quarter was been humming along quite nicely for the Canadian economy, and even with a slight reduction in speed forecasted for the month of September, the annualized reading for Q3 had been estimated by analysts to come in at 2.5%.   The official numbers showed that economic growth expanded by more than forecast, with the Q3 reading coming in at 0.7% which amounts to an annualized reading of 2.7%, as household consumption remained elevated with inventories and business investment in non-residential structures both increasing at healthy amounts from the previous quarter.

As telegraphed, exports acted as a headwind for more robust growth in the quarter, declining by 0.5% in the third quarter after three consecutive quarters of growth.   The bright-side for the export sector was that the terms of trade increased in Q3, with export prices increasing at a faster clip than import prices, ultimately contributing to the 0.9% increase in real gross domestic income.   The Loonie has had a fairly tough week, and with everyone and their dog piling on with cautionary warnings in regards to the headwinds the commodity-linked currency faces (Goldman’s recommendation to go long USDCAD for a target of 1.14, IMF’s forecast of first interest rate increases in early 2015) today’s GDP data allows for some amnesty.

USDCAD dropped about 20pts directly after the release as demand for the Loonie firmed, but with subdued volumes the Loonie is having a tough time making any meaningful headway.   The small bounce in the Loonie will most likely have some corporates look to take advantage of the move today, as we are still of the view there is willing demand for USD on any meaningful dips.

As we get set for what is likely to be another low-volume North American session as major banks run skeleton staffs, equity futures are pointing to a positive open as risk appetite is modestly bid.   A rally in commodities this morning appears to be generating demand for the commodity-linked currencies like the AUD and the CAD, as copper and WTI both post impressive upward momentum heading into the end of the week; copper for February delivery is up 0.78% while front month WTI moves back towards $93/barrel.

The economic release calendar heats up next week, and with volume creeping back into markets as traders return to their desks after the Thanksgiving holiday, the stage is set for what could potentially be a volatile few days.   Monetary policy decisions from the Bank of Canada, European Central Bank, and Bank of England will dominate the central portion of the week, with focus turning to the labour market in Canada and the US  next Friday.   Although no central banks are forecast to make any policy changes this time around, the communication from each banking head will be ripe for analysis as traders gauge the respective paths forward; especially since each central bank has fairly recently adopted new tones towards their stances on monetary policy.

Stephen Poloz and the Bank of Canada have telegraphed they will be on hold in terms of raising rates until at least 2015, and at this point we have yet to see any incoming data that would argue the BoC’s view will be altered or skewed in a positive manner at the meeting next week. With USDCAD consolidating towards the upper-band of the trend-channel that has been in place since mid-September, there is a possibility to see a break to the topside with relatively dovish BoC and strong non-farm payroll number out of the US.

Alternatively, should the long USD trade not have the legs to establish itself above the July high of 1.0608, and the jobs report from Canada’s neighbours to the South establishes the unlikeness of a reduction in the FOMC’s rate of stimulus, the pair could consolidate towards the middle of the trend channel in the low-1.05s.   Have a great weekend!

Further reading:  This week in the markets: Focus turns to central bank decisions 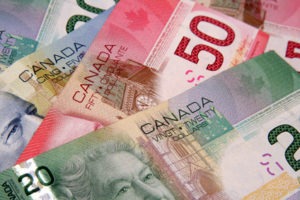 Inflation heating up in Japan with the core-core measure increasing by 0.3%; earlier Yen weakness quickly unwound as USDJPY is rebuffed from the mid-102s  CPI and Unemployment for EZ both register positive surprises, but not enough to materially change the outlook of the region; EURUSD pivoting around 1.36  Canadian GDP beats forecasts but Loonie rally faces headwinds in low liquidity environment After a mixed overnight Asian session in regards to equity performance, there is little red on the board for Black  Friday, as North American equity futures continue a low volume melt-up ahead of the opening bell.   The Nikkei…