This was the week: Hawkish hike, stocks sell-off

The Bank of Canada raised interest rates from 1.50% to 1.75% as widely expected. The Ottawa-based institution went forward and published a hawkish statement. They removed the word “gradual” about interest rates, opening the door to a faster pace of increase. Moreover, they stated their goal to reach a neutral rate, also implying there is still a way to go. The tone of BOC Governor Stephen Poloz and Deputy Governor Carolyn Wilkins was upbeat. They emphasized the removal of high uncertainty after the US and Canada reached a new NAFTA deal, now called USMCA.

The all-important rate decision sent the loonie higher against the US Dollar, but this did not last for too long. Global stock markets sold off, and the risk-off sentiment weighed heavily on risk currencies such as the loonie. The accompanying sharp drop in oil prices did not help either. Even without the slip in the value of crude oil, the spread between Canadian oil prices and American ones means that Canada’s critical export is sold at a low price.

US data was mixed with a miss on New Home Sales and a beat on Pending ones. Durable goods orders beat on the headline but missed on the core. US GDP was mixed as well with a beat on the headline, 3.5% annualized growth, but unconvincing details such as a drop in exports, lower inflation, and a big rise in inventrories which will likely be reversed in Q4.

Canadian events: GDP and then the jobs report

Canada releases its monthly GDP report for August on Wednesday. While it does not have the same impact like the quarterly report, the loonie usually reacts to the data. Back in July, the economy grew by 0.2%, better than had been expected. The Raw Materials Price Index and the Industrial Product Price for September are both released alongside the GDP figure.

Markit’s Manufacturing PMI for October may rise as the survey already takes the new trade deal into account. The figure stood at 54.8 points in September, reflecting OK growth in the sector.

The primary event is the jobs report for October due on Friday. The Canadian economy gained a whopping 63.3K positions in September and may now lose jobs. Apart from the headline number, the composition of full-time positions vs. part-time ones is also important. The Unemployment Rate stood at 5.9% back then with a participation rate of 65.4%. Any change in the jobless rate should be watched alongside a change in participation. Wages also play a significant role in the impact on the loonie. After an increase in the spring, annual wage growth slumped recently, weighing on the C$.

Canada’s trade balance is also due on Friday. After a surplus in August, Canada may return to having a deficit in September. 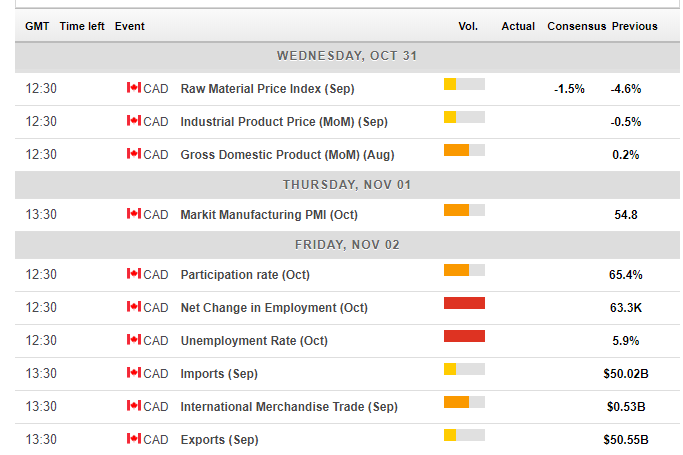 US events: Buildup to the NFP, politics becoming prevalent

The Fed’s favorite inflation figure kicks off the week. The Core PCE indicator uses a different methodology than the Core CPI, but they track each other. The same annual levels of 2%, which is the Fed’s target, is expected. Personal Spending and Personal Income are also of interest.

Wednesday’s ADP Non-Farm Payrolls serves as s hint for the Non-Farm Payrolls and moves markets, even though the correlation was weak last month. A more moderate increase in private sector jobs is likely now. Another hint comes from the ISM Manufacturing PM for October due on Thursday. Back in September, the gauge hit a high of 59.8 points.

The climax of the week comes on Friday with the Non-Farm Payrolls for October. September’s report was mixed: the headline disappointed with only 134K jobs gained but revisions for August and July helped balanced the picture. Wages were OK with 0.3% MoM and 2.8% YoY. Both the headline and wage growth are essential this time.

Apart from the busy economic calendar in the US, politics will take center stage as the Mid-Term Elections are getting closer. Polls suggest Democrats winning the House while Republicans retain the Senate. A divided government could weigh on the US Dollar. New polls or other events swinging voters can rock the greenback ahead of the vote on November 6th. 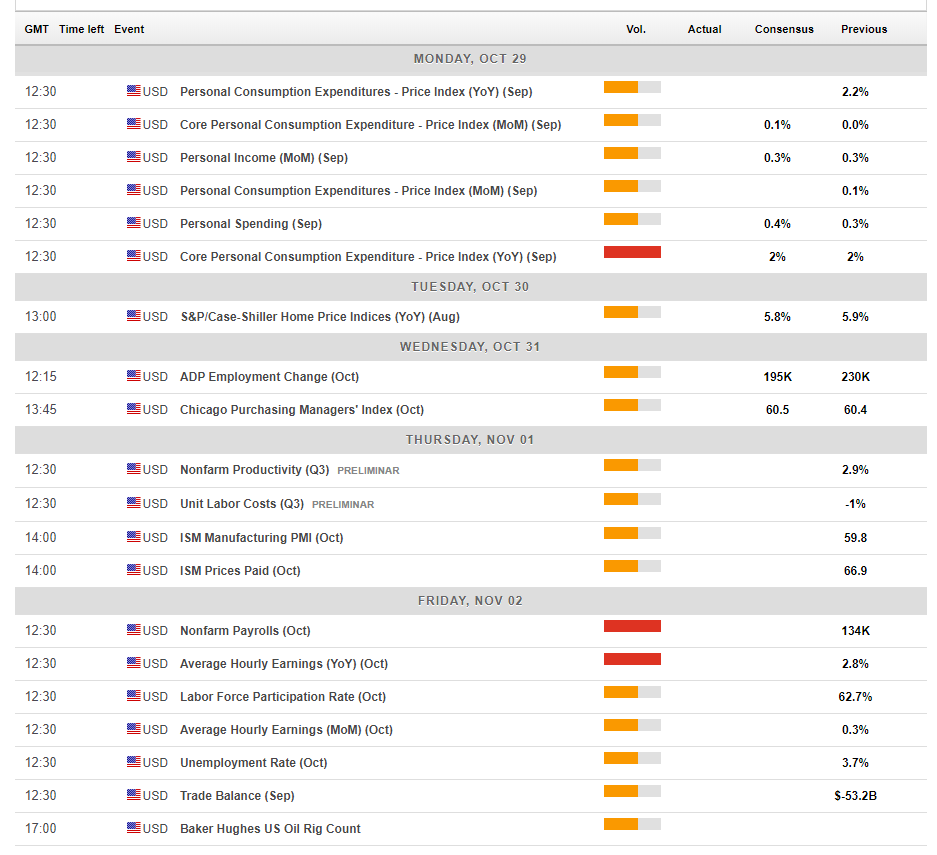 The USD/CAD is trading close to a downtrend support line that began in July. It is supported by a steep uptrend line that dates back to the beginning of the month. Both are marked with thick black lines on the chart below. The pair will eventually have to pick a side.

It is currently trading above the 50-day Simple Moving Average and 200-day one, both bullish indicators. Also, momentum is to the upside, and the Relative Strength Index is not indicating overbought conditions.

1.3160 held the pair down in mid-September and is a weak line. More importantly, 1.2970 worked as support in early August and serves as a defensive line if the USD/CAD loses the round number of 1.3000. Further down, 1.2880 was a double bottom after holding the pair in August and September. 1.2820 is a veteran support line from May, and 1.2780 was the low point this month and the place where the uptrend support begins. 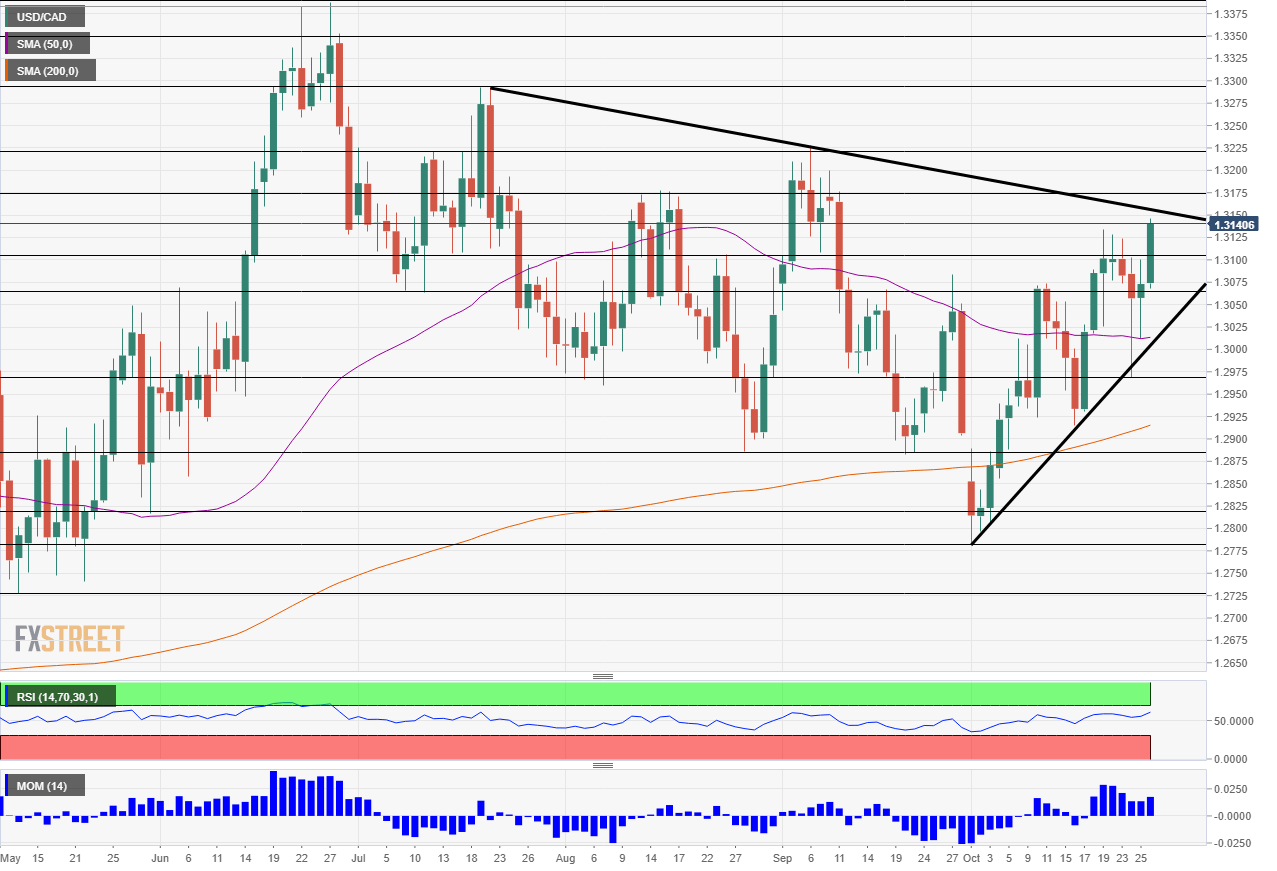 The Canadian economy is still not feeling the full effect of the removal of uncertainty around trade. Also, the Canadian Dollar does not entirely reflect the growing hawkish stance by the BOC. The C$ has more room to the upside and USD/CAD has room to fall. 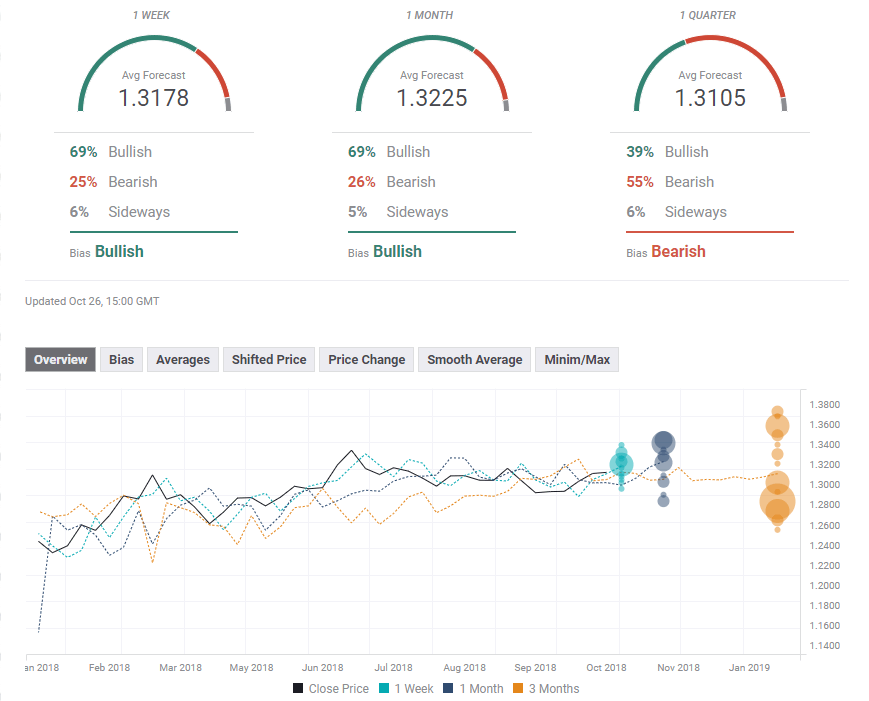 Get the 5 most predictable currency pairs
Previous ArticleGold surged to fresh multi-month highs above $1240 as Wall Street collapses
Next Article GBP: Budget, Bank of England and Brexit… it could be messy – ING