Cardano price has been wrestling with the magnet effect of the preceding trading range high of $1.57, thereby restricting a sustainable advance. Today’s bullish engulfing day may be the solution to the sideways trend over the last six trading days, allowing ADA to target higher prices with improved trader commitment.

On a dollar basis, Cardano price printed a new all-time high today at $2.04 and a three-year high against Bitcoin, testifying to the relative strength of the digital token. One of the big reasons for the amplified gain is that ADA has is a less-intensive mining and transaction network, unlike Bitcoin. In fact, Elon Musk’s comments yesterday only strengthened the ADA position as the lesser carbon-intensive alternative in the space.

On May 5, driven by a 16% gain, Cardano price emerged from a cup-with-handle base, establishing a trend change for ADA following two months of a trendless price. The post-breakout price action has been awkward, but the accumulation/distribution profile of the daily volume metric has remained steadfastly positive. Even during yesterday’s decline of 11%, the volume barely exceeded the 50-day average. In contrast, today’s volume is running 3x the average as Cardano price gains 21%.

The measured move target of the cup-with-handle base is $2.41, generating a 65% gain from the handle breakout at $1.46 and a 25% gain from price at the time of writing.

Before reaching the measured move target, Cardano price will need to overcome the resistance of the 138.2% Fibonacci extension of the April decline at $1.95, and more importantly, the psychologically important $2.00.

During the February to April period, $1.00 was dominant in the price action of ADA, indicating that $2.00 could also be an intimidating price level.

If Cardano price is successful with the battle at $2.00, ADA will find temporary resistance at the 161.8% extension of the April decline at $2.08 before completing the measured move to $2.41.

A close above $1.89 today would confirm the bullish engulfing day and raise the probability of ADA reaching at least the measured move target, and potentially higher prices moving forward. 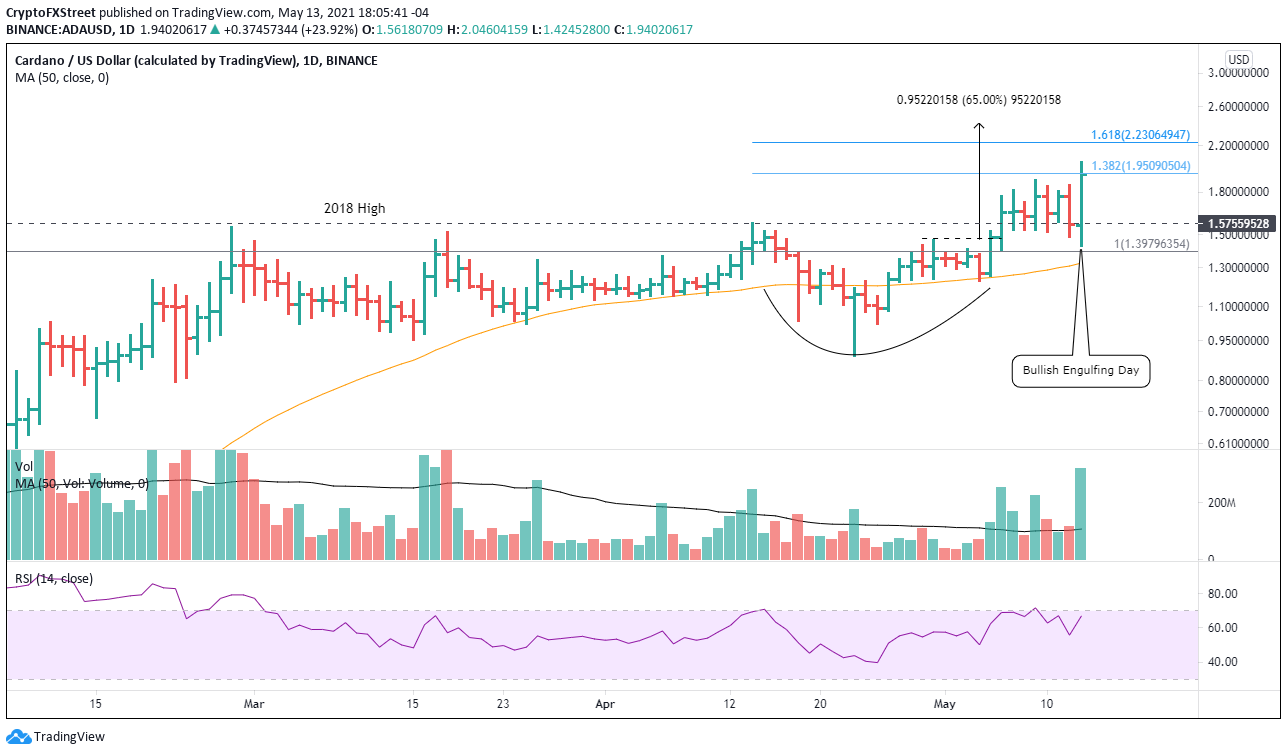 Yesterday’s widespread sell-off in the cryptocurrency market appears to be a temporary setback for the rally. Still, any further selling may raise the contagion quotient and disrupt the bullish ADA outlook.

The March-April trading range high at $1.57 is significant support for Cardano price, as noted by the six consecutive tests between May 7 and May 12.

Any additional selling pressure could push ADA down to the handle high at $1.46 or even the 50-day simple moving average at $1.33.

Cardano price forming a massive bullish engulfing day after overnight shakeout. 2018 high continues to influence price after three years. ADA solidifies itself as the fourth-largest cryptocurrency by market capitalization. Cardano price has been wrestling with the magnet effect of the preceding trading range high of $1.57, thereby restricting a sustainable advance. Today's bullish engulfing day may be the solution to the sideways trend over the last six trading days, allowing ADA to target higher prices with improved trader commitment. Cardano price inspired by a more sustainable environmental cost On a dollar basis, Cardano price printed a new all-time high…