Bitcoin is remarkably supported above $11,000. The largest cryptocurrency market gracefully took in the losses from the recent high around $12,314. The anticipated breakdown occurred due to the failure by the buyers to sustain gains towards $13,000. The biggest blunder happened when the price dipped below both the 50 Simple Moving Average (SMA) and the 100 SMA in the hourly timeframe.

A sharp correction smashed through $11,500 tentative short-term support. The bulls, devoted to ensuring declines are mitigated magically defended $11,000 by establishing a low at $11,092. The slightly triumphant bulls sent Bitcoin price back above the 50 SMA last weekend. Nonetheless, a high formed at $11,587 allowed an easy takeover for the bears who are currently limiting upward movements.

At press time, Bitcoin exchanges hands at $11,257 amidst a developing sideways trend. The trend is supported by the signals from various technical indicators like the Moving Average Convergence Divergence currently holding onto the mean line (0.00). The inclination to the south is displayed by the Relative Strength Index (RSI) currently hitting oversold levels. A reversal is expected in near-term as the signal re-emerges above 30.

In other news, a crypto analyst on Twitter ‘Murad Mahmudov’ advises investors to focus on larger timeframes and “zoom out & think big.” He says that there is a gradual accumulation ay the current levels setting the groundworks for the next rally to $11,000.

“At first glance this looks like a weak chop for the next week or so, but my intuition tells me there is steady accumulation happening at these levels.

Don’t try to outsmart yourself on short timeframes, zoom out & think big. In my view, BTC is going to $100K per orangecoin.” 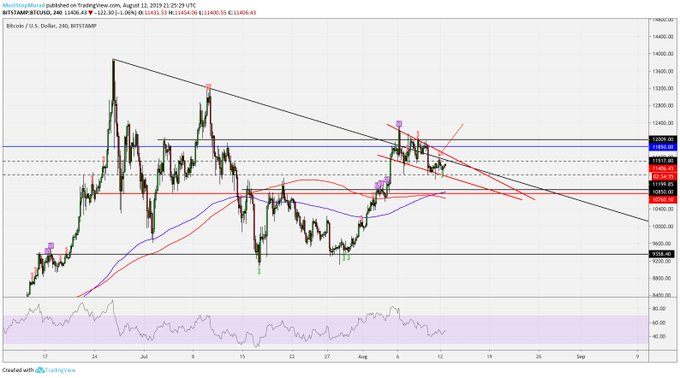