Home » Crypto Today: Bitcoin claims $7000 but must hold for recovery

Crypto Today: Bitcoin claims $7000 but must hold for recovery

ETH/USD is currently trading at $170 (+9.95%), big buying momentum came into play, but time will tell whether this is a short squeeze.

Chart of the day: BTC/USD daily chart (A big retest of breached bear flag is in play) 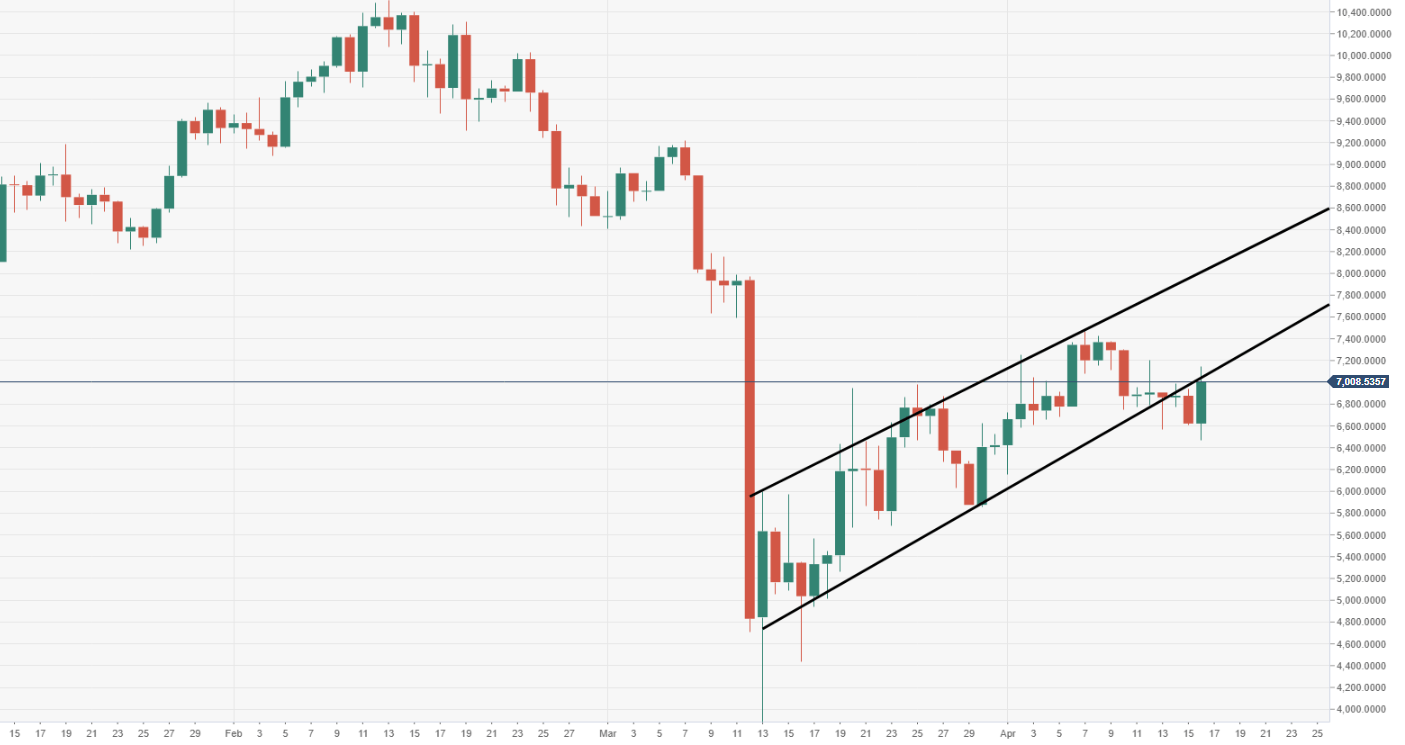 The daily average transaction values across the Ethereum platform are now equal to those of the Bitcoin (BTC) network. According to blockchain analytics firm Messari, the daily value transfer — the total value of assets moved on the blockchain over a day — of the Ethereum network began rivalling those on the Bitcoin network as of April 12, approximately $1.5 billion

A recent report from the Ethereum Classic community has stated that ETC TestNets have been updated successfully, so they are now made ready for MainNet.

The Dutch Ministry of Finance’s implementation of the European Union’s fifth anti-money laundering directive, or AMLD5, requires the country’s Central Bank to monitor its cryptocurrency industry. The cost of this supervision will be passed on to crypto-based businesses. A recent report suggests that these new compliance fees will be higher than those paid by traditional trust and credit card companies. AMLD5 was supposed to bring increased transparency and a unified approach to anti-money laundering measures across the EU. But the varying member states have each implemented different interpretations of the directive, often prioritizing their own interests.

Facebook’s planned cryptocurrency Libra will be linked to individual national currencies and overseen by global watchdogs in a scaled-back revamp it hopes will win regulatory approval.

The number of ransomware attacks globally has dropped significantly since the coronavirus crisis intensified in March, according to a new report from Chainalysis. The blockchain analytics firm said the drop was particularly significant given there were growing concerns over the impact of ransomware attacks against hospitals and other healthcare organizations during the crisis. Hospitals are a favoured target for ransomware gangs. Security software provider Emsisoft reported that over the course of 2019, at least 764 healthcare providers in the U.S. had been attacked. In mid-March Emsisoft publicly implored ransomware gangs to stop targeting hospitals due to the potentially fatal impacts during the crisis.

Second State recently released a new version of its leading Ewasm software, accommodating developers to write Ethereum 2.0 smart contracts. Ethereum developers can compile Ethereum smart contracts into Ewasm bytecode and deploy them onto any blockchain that is compatible with the ssvm-evmc VM.

The Canadian Asset Manager 3iQ launched a closed-fund – ‘The Bitcoin Fund’ listed on the Toronto Stock Exchange as QBTC on 9th April. The ‘Bitcoin Fund‘ has listed around 1,491,800 shares of Class A “QBTC.U” shares available on the Toronto Stock Exchange or TSX with a market capitalization of around $16.3 million. Presently, the per-share price of QBTC is $10.95. The Fund will hold custody and other long-term investments in Bitcoin to provide investors with a convenient alternative to a direct investment in Bitcoin.

Waves Enterprise, an enterprise-grade hybrid blockchain firm, recently got included in the Unified Register of Russian Software for Computers and Databases by the country’s Ministry of Communications. According to the official registry published by Russia’s Ministry of Communications, the firm was categorized as a “cloud-based distributed ledger service and service for virtualization and storage of data.” A source from Waves Enterprise said that inclusion into the official registry software of Russian is a positive one for the company, as the blockchain platform can gain better access to projects by public organizations and the local government.

to go up, what will?