Latest
You are at:Home»Crypto News»Crypto Today: Bitcoin on the verge of smashing through $9000

BTC/USD is currently trading at $8,900 (+2.80%) in the afternoon in U.S. hours, as the bulls rather further momentum, attempting to convincingly regain the $9000 mark.

Chart of the day: BTC/USD weekly chart (price action extending to the upside out from bull flag) 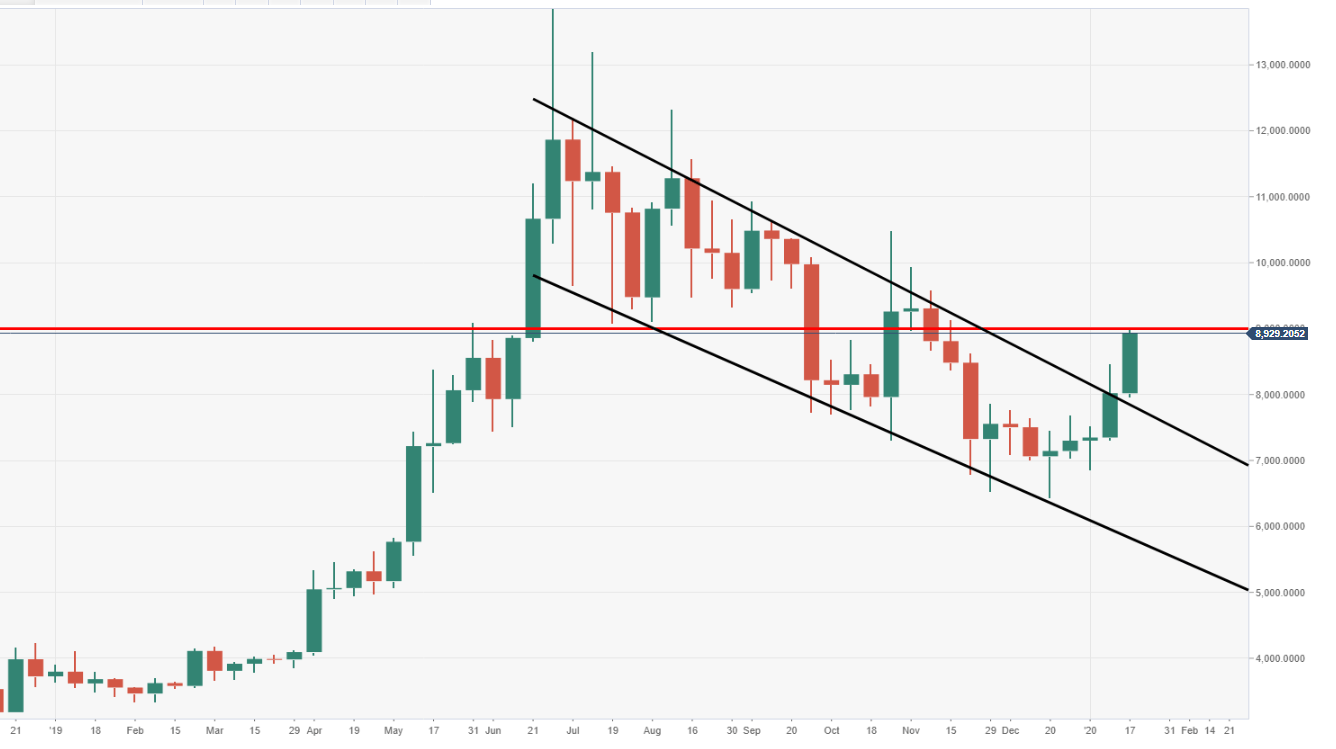 The Crypto Ratings Council, formed by crypto businesses committed to compliance with US securities laws, has rated Dash with the best score possible. This means the analysis found Dash has few or no characteristics consistent with treatment as a security

Ripple CEO Brad Garlinghouse has again been speaking on XRP and why it should not be classified as a security. He said: “I think it’s very clear that XRP is not a security.” Adding: “[XRP] exists independently of Ripple the company. If Ripple the company is shut down tomorrow, the XRP ecosystem will continue to exist. It’s an independent open-source technology.”

The Canadian Securities Administrators (CSA) have published new guidance indicating that the majority of the digital asset exchanges operating in the country will fall under the securities law.

The latest guidelines published on Thursday explicitly specify that any crypto exchange facilitating securities or asset trading will be subject to securities legislation.

A bill seeking to exempt personal cryptocurrency transactions from taxation for capital gains has been reintroduced in the Congress of the United States.  What the bill looks to change Called “The Virtual Currency Tax Fairness Act of 2020,” the bill would establish an exemption for virtual currency expenditures that qualify as personal transactions. Users would then not have to report instances when they spent crypto whose valued had changed relative to the U.S. dollar on day-to-day expenses.

J. Christopher (Chris) Giancarlo, former Chair of the Commodity Futures Trading Commission (CFTC), along with Charles Giancarlo and Daniel Gorfine, have partnered with Accenture to create the Digital Dollar Project (the Project) to advance exploration of a United States Central Bank Digital Currency (CBDC). The purpose of the Project is to encourage research and public discussion on the potential advantages of a digital dollar, convene private sector thought leaders and actors, and propose possible models to support the public sector, according to Chris Giancarlo.

According to Chainalysis, who conduct blockchain analysis and produce reports, they note that cryptocurrency exchanges play a role in laundering illicit BTC streams. There are also the so-called mixing services, gambling sites, and darknet markets, albeit those represent much less of a solution. In fact, the major exchanges most people rely on are becoming an increasingly popular target for money laundering efforts.Both Binance and Huobi combine for over 52% of all illicit bitcoin received by trading platforms.

President Maduro has announced that airlines are flying from Caracas, the capital of Venezuela must buy fuel through Petro.

Major South Korean cryptocurrency exchange Bithumb has decided to litigate a near $69 million (80 billion won) tax bill levied by the National Tax Service (NTS). According to a report published by The Korea Times on Jan. 16, Bithumb filed a complaint with the NTS, suggesting that the imposed tax bill is groundless given that cryptocurrency is not a legally recognized currency. The South Korean tax tribunal now has to decide whether to grant or dismiss the exchange’s motion within 90 days.

About one-third of US-based small and medium-sized enterprises (SMEs) accept cryptocurrency as a payment for their goods and services, according to a survey commissioned by American insurer Hartford Steam Boiler (HSB), a subsidiary of German Munich Re.

Bitcoin price predictions are ridiculous and are a disservice to the ecosystem due to their shallowness. They bait people into investing in a risky asset they don’t understand well because they think it’s an easy way to get rich quickly. In Bitcoin, ignorance is the path to rekt.

Get the 5 most predictable currency pairs
Previous ArticleBoJ: No major changes seen in the near future – Wells Fargo
Next Article CHF appears well placed to extend its advance in the near-term – MUFG