ETH/USD is currently trading at $235 (+4.20%), a near-term pick up after the recent bout of selling pressure, however, the strong resistance should be noted at $250.

Chart of the day: BTC/USD daily chart (the price was caught by a secondary ascending trend line of support, preventing the price from free-falling) 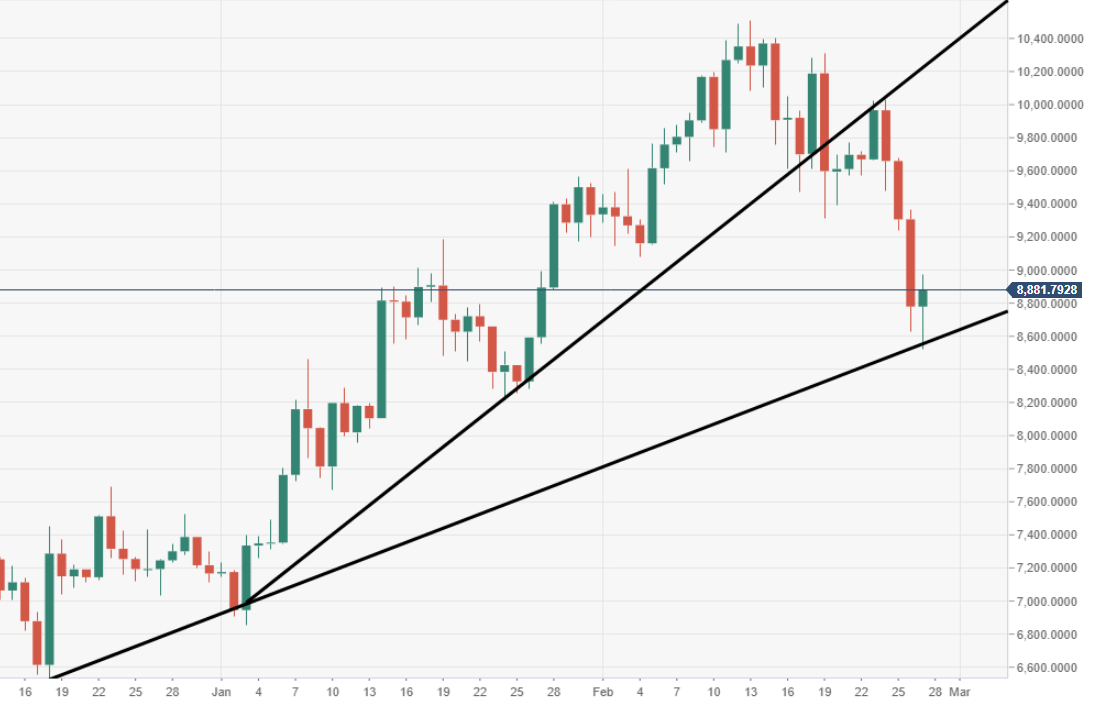 Jeff Dorman – the chief investment officer of the crypto firm Arca, commented on Bitcoin being touted as a safe-haven. He said: It’s irresponsible for anyone to say that bitcoin is truly a ‘safe haven.’ Look at how gold and Treasuries and equities react instantaneously to global fears. Bitcoin and digital assets live outside that workflow. Azimo, a London-based online remittance platform has joined forces with Ripple blockchain project, in a bid to leverage the latter’s XRP-powered on-demand liquidity (ODL) solution for faster, cheaper cross-border payments to the Philippines, according to a press release.

On Feb 26, according to the data analytics provider Skew, over $150 million worth of Bitcoin was liquidated on the trading exchange BitMEX, the most seen since the new year began. Millions of dollars of long and short positions caused the value of the cryptocurrency to fall to $8,580, a decrease of more than 6%. Prices in the session, have since recovered the beating seen on Wednesday.

According to a report by Bloomberg, San Francisco-based blockchain project Ripple Inc. Could soon face a lawsuit that, according to the firm, could topple the market for the firm’s digital token, XRP.

Action film star Steven Seagal has been fined for unlawfully touting cryptocurrencies and acting as the brand ambassador for a controversial initial coin offering (ICO), called Bitcoiin2Gen (B2G). The Hollywood star, 66, has agreed to pay a combined $314,000 in fines and penalties, the Securities and Exchange Commission (SEC) said in a statement on Thursday.

Cryptocurrency exchange Binance has partnered with public blockchain protocol Shyft Network as it readies itself to comply with Financial Action Task Force (FATF) regulations. The Shyft Network was designed to provide a decentralized solution for crypto industry players to fulfill global compliance standards, including the FATF’s “travel rule.”

It’s irresponsible for anyone to say that bitcoin is truly a ‘safe haven.’ Look at how gold and Treasuries and equities react instantaneously to global fears. Bitcoin and digital assets live outside that workflow.

DXY: Markets pricing in a Fed rate cut although a EUR/USD correction is on the cards