Latest
You are at:Home»Crypto News»Crypto Today: Remaining in the red after the Binance raid, NEO tumbles, Tezos shines

Here is what you need to know on Friday, November 22

The sell-off in crypto markets is unrelenting, with further falls across the board. China’s raid of Binance’s offices in Shanghai has weighed on the mood.

– Bitcoin down but not out, BTC/USD remains on the back foot but has also been able to recapture the $7,500. It dropped below $7,400 on Thursday, trading at the lowest in a month. $7,296 was the October 23 trough, and a fall below this line would send the granddaddy of cryptocurrencies to the lowest since May.

– Ethereum is also attempting to recover from the lows, as ETH/USD battles $160. It has now created a triple-bottom at around $153.

– Ripple has also been falling, but its drop is more gradual. Around $0.24, XRP/USD is still shying away from the mid-October low of $0.22.

– NEO/USD is suffering a more substantial fall of 2.5% and continues standing out. See chart below

– Tezos stands out with a 5% gain despite issues with the French police.

The confluence chart has been improving for BTC/USD, with a massive support line around $7,320: 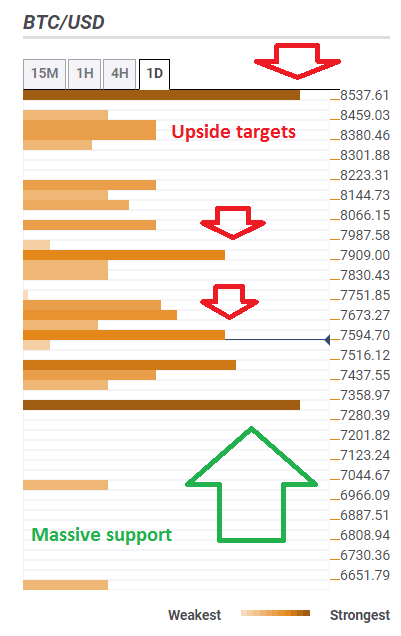 NEO/USD drops below the SMA 200 curve – the 200-day Simple Moving Average is one of the most considerable technical indicators in fall financial markets. Moreover, The Moving Average Convergence/Divergence (MACD) indicates increasing bearish momentum.

– Binance crackdown: Chinese authorities have raided Binance’s offices in Shanghai, shutting down the offices. Authorities in the world’s second-largest economy have extended their crackdown on crypto-related activities.

– Bakkt, the International Exchange owned venture, is set to tap into Singapore’s digital asset market. Expanding into the Asian financial hub is positive news for the industry.

– Ethereum Foundation is offering details on the Istanbul Hard Fork upgrade, which is due on December 7. Investors are awaiting the next leap forward – Serenity.

– The OneCoin saga continues, with Mark S. Scott, the lawyer that allegedly received $50 million from Ruja Ignatova, known as the “cryptoqueen”, has claimed that he was unaware that OneCoin was a scam. The infamous Ponzi scheme and other scandals have been weighing on the prices of digital coins.

Libra: A new bill aims to have US Securities Law responsible for regulating Facebook’s stablecoin The initiative is bipartisan and so likely to advance.

Quote of the Day: Dave the Wave offers advice

Some trading advice from Dave the Wave, in this tweet

You wouldn’t want to wait for price to dip below the channel – it was red last time. You’d want to be averaging in, if you’ve dry powder, with price in the channel now that is green.